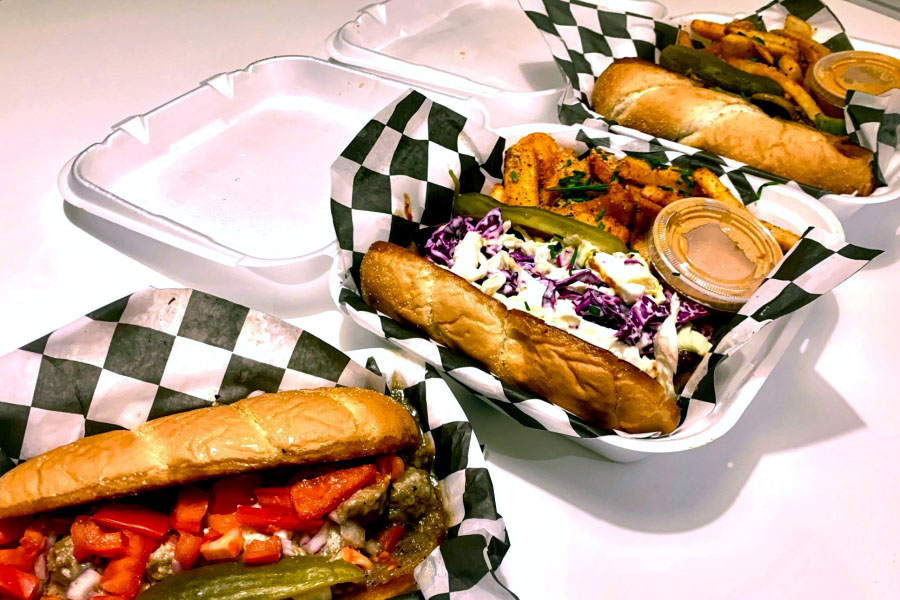 The black food truck on Vancouver’s Upper Main Street with the pirate holding a sandwich logo may look abandoned. Owner Sean Tolman has closed Yoobies eat down for December and January due to illness. He recovered and resumed playing loud music inside his food truck while preparing generously proportioned sandwiches bathed in sauces ranging from classic French to chipotle ranch.

Tolman opened his Uptown food truck to share his take on classic sandwiches like pulled pork, meatball sub, Philly and Reuben cheesesteak. Yoobies Eats (2425 Main St.) is open from noon to 6 p.m. on Wednesdays and Thursdays, noon to 8 p.m. on Fridays and Saturdays, and noon to 5 p.m. on Sundays. Tolman will continue to make sandwiches if customers show up.

He plans to extend the hours as the weather warms.

Tolman discovered his love for cooking at an early age. When he was growing up in the small town of Price, Utah, his mother would bring the TV to him in the kitchen so he could cook with Julia Child. At the age of 17, Tolman moved to Salt Lake City and learned classic French cuisine by learning for Austrian and Swiss chefs.

He landed in Vancouver after serving as executive chef at The Aspen Grove in Astoria, Oregon. When this restaurant closed for good due to the pandemic, his friend Kurt Van Orden asked him to come work at his Uptown Village speakeasy, UnderBar. Yoobies Eats is the food truck that stood behind UnderBar.

At UnderBar, the food truck was called U B. Tolman decided to use those initials to create a fictional character called Yoobie – a pirate, punk rock chef who looks like Tolman with his long beard and bandana.

At first glance, the menu seems simple – a list of classic sandwiches, $11 each. But as you work your way through their messy beauty, it’s clear these aren’t typical. They were Yoobie-ized.

“Food is art on so many palettes – on the nose, the tongue, the eyes. And then it’s gone, and you create it again,” Tolman said.

His favorite sandwich is always the newest. For now, it’s the Me First and the Gimme Gimmes, Tolman’s take on a chicken and bacon ranch sandwich. The name comes from a punk rock supergroup and cover band that formed in the 90s in San Francisco, known for their unique and energetic interpretations of decidedly non-punk rock music, such as the songs and tunes of John Denver show.

“I’ve looked around Vancouver and chicken and bacon ranch is everywhere,” Tolman said. “I’m doing a punk overhaul with bacon, mushrooms, chicken, chipotle ranch, fresh tomatoes and pepper jack cheese. And since I do it, it becomes punk rock.

Lots of sauce, plenty of toppings and mushrooms in unexpected places characterize the sandwiches at Yoobies Eats. They require your full attention, as well as utensils and a stack of napkins.

“My sandwiches are juicy. I always give you a fork and napkins,” Tolman said.

Mushrooms appear in his Philly sandwich. Tolman and I agreed that we didn’t remember the mushrooms in the Philly cheesesteaks we ate on East Passyunk Avenue in Philadelphia, the neighborhood known for a rivalry between Philly cheesesteak kings Pat’s and Geno’s.

However, a client and Philadelphia native recommended that Tolman put mushrooms in the sandwich, and it works. The tender mushrooms soak up the sauce and add an extra layer to the meat and cheese.

Although his cooking style and musical tastes are punk rock, Tolman’s serving style is old school. He cares about his customers. He wants to offer a gluten-free option but hasn’t been able to find the right gluten-free bread for his juicy sandwiches, so any sandwich can be served on fries instead of bread. Tolman added half sandwiches ($7.50 with fries) to the menu because customers told him they couldn’t eat a whole Yoobies Eats sandwich in the middle of the day when they had to work.

The menu is really only a suggestion. Tolman will make customers any combination of things they like with the ingredients he has in the basket. He’ll cook a Philly chicken or run to the store to get some mustard for a customer who wants it on a Reuben sandwich.

He will not judge. Tolman just wants to make good food at a fair price and feed people.