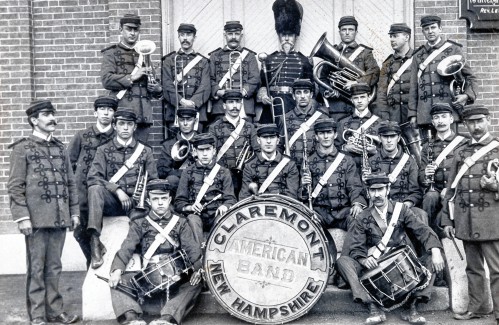 It was almost never built and was nearly demolished.

Now, after musical and theatrical performances of every conceivable kind, including one featuring an elephant, Claremont Opera House will host a 125th anniversary party with a stage show on June 25.

The show includes re-enactments of oral histories recorded 40 years ago; Thief, a one-act play and the first performance performed at the opera; and several musical performances. Pianist Virginia Eskin will play the Great March of Claremontwritten by Stevens High School music teacher Addison P. Wyman in 1868.

“It’s a wonderful evening celebrating the history of theater and music at the opera,” Felicia Dalke, chairwoman of the opera’s board, said in an interview inside the auditorium. 800 seats.

Dalke said she found a theme for the celebration when Colin Sanborn, former president of the historical society and director of circulation at the Fiske Library, presented her with a book, Claremont, New Hampshire — A Living Historyan index of taped interviews for an oral history project in 1980. Dalke took the taped interviews home.

“It was amazing to hear these stories and the whole story of so many special times at Claremont,” she said.

An anniversary committee agreed on the idea of ​​selecting excerpts from these interviews relating to the history of opera for the stage show.

The anniversary show has two acts. It starts with living pageants, said Sharon Wood of the Off Broad Street Players. Members of the local theater group will play 10 Claremont residents who were interviewed as part of the oral history project.

“We selected people who had comments about arts and entertainment,” Wood said. “They (the actors) will come up on stage and recite the quotes from the oral history.”

Some of these memories date back to the early 20th century, including that of Elizabeth Bell, who was 95 when she was interviewed.

“She attended the consecration in 1897 when she was 11 years old,” Dalke said. “She came over from North Street with her mother and she said what a great day it was for Claremont and everyone was here and the governor.

“Hearing someone talk about this, from this period, is priceless and makes you realize what a treasure it is and how important it is to bring it back to life,” said said Dalke.

Audiences will also hear Mrs. Pearl “Effie” White recall when an elephant entered the opera house for the Carillons of Normandya comic opera, in 1913.

Hoisting Minnie, the 3-ton elephant, from the street to the backstage didn’t work, so they accompanied her up the grand staircase and down the center aisle. At intermission, the elephant was brought back and right in front of White.

“In the oral history, she said, ‘They told us to be quiet and not make any sudden movements while the elephant passes by you,'” Dalke said.

While the stage show will focus solely on memorabilia from the opera, a new book, Stage Whispers: A Living Story Toldcovers the broader subject of arts and entertainment when Claremont was the center of cultural attractions in the Upper Valley.

As with the celebration, the committee took selected comments from oral history about places like the Roseland Ballroom, movie theaters, and park pavilions.

With funding from a New Hampshire Humanities grant, the committee hired writer Annalisa Parent, who combined oral history quotes and background information to tell the story of how residents of Claremont entertained themselves.

“I think it will be a wonderful tribute to this place but also to the history of Claremont and will remind people that this building has gone through its ebbs and flows of support, its successes and its failures,” Dalke said. “The book is meant to remind people how special this building is and how special Claremont is in its rich and storied history in arts and entertainment,” Dalke said.

Two musical performances will bridge the gap between the history of opera and current events. The Claremont American Band, which was at the original inauguration, will play John Philip Sousa Stars and stripes forever, which the composer performed in Claremont with a 50-person marching band on the opera stage. And Melissa Richmond, executive director of the West Claremont Center for Music and Arts, and classically trained flautist will also perform.

Throughout its history, the opera has relied on the perseverance of the inhabitants who are committed to building and maintaining it.

Construction began in the fall of 1895 after months of disagreement and even a lawsuit trying to stop the project, author Gerald Gatz wrote in a 1982 article for Historic New Hampshire.

The first hurdle was the defeat of three separate proposals to build a sewer system for the growing city that many believed was more important than replacing the town hall.

After the third vote on the sewer project, in February 1895, voters went to the town hall on March 12 and easily approved articles of mandate to demolish the town hall and build an opera house in the same place. . But rather than settle the issue, the vote resulted in disputes over the selection of an architect that dragged on into the spring and summer, Gatz wrote.

Resignations from the building committee and a lawsuit in Superior Court seeking to prevent the city from using public funds to build an opera house created more discord.

To break the deadlock, the building committee decided in August to start from scratch with the hiring of architect Charles Rich, a graduate of Dartmouth College. Things moved quickly after that. Rich’s plans were approved, and builder Hira Beckwith submitted a low bid of $47,385 ($1.6 million today), although the final cost was $62,000. Construction began in the fall of 1895 and the Italian Renaissance Revival style building was completed two years later with a dedication on June 22, 1897.

A recreation of the 1897 dedication speeches will be part of the June 25 show, but not one that demonstrated the raw emotion that reigned at that time.

Dr. Osman Way, who was at the heart of the debate and had resigned as a member of the building committee, wrote Gatz, derided the demolition of the Old City Hall as “an act of vandalism”, but said nevertheless stated that he would try to be “faithful to majority rule.

Equally controversial was the debate more than 60 years later, when the opera house was nearly demolished.

In the mid-1960s the venue was closed due to its condition and lack of support for live entertainment. Dalke said former mayor Marion Phillips tried to persuade the city council to take action and invest in needed repairs, to no avail.

Dalke said local entrepreneurs ridiculed the idea of ​​saving the opera house and instead suggested it be demolished, leaving only the town hall offices on the first floor. But Phillips was undeterred. She brought “experts” from the Hopkins Center for the Arts in Dartmouth to tour the opera house and their opinion apparently put an end to talk of demolition, Dalke said.

“When they walked in and saw the beauty, they said, ‘This building needs restoring.’ ”

John Bennett, now a retired Stevens High School art teacher and current board member, led efforts to add the opera house to the National Register of Historic Places in the early 1970s. from there, Bennett worked with others to hire an architect and raise money for the restoration. The building reopened in the late 1970s.

“This place wouldn’t be here without his efforts,” Dalke said of Bennett.

Today, the city’s architectural and cultural centerpiece needs more repairs, including a new roof, and Dalke said they are struggling to attract large audiences following the pandemic closures. But for now, opera fans are content to take a moment to celebrate its 125-year history and the city’s performing arts talent.

“For this show, I’m very happy that these organizations are coming back to the opera house and collaborating with us and partnering with the show because it really is a community stage,” Dalke said.

For more information about the show and the book, visit www.clarremontoperahouse.com.

Patrick O’Grady can be reached at [email protected]