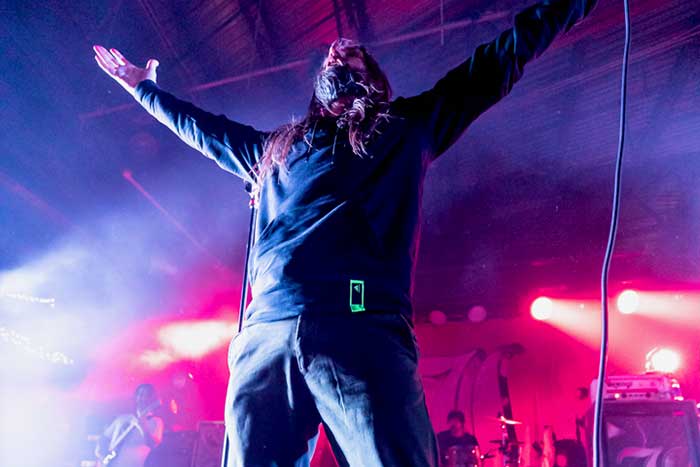 REVIEW AND PHOTOGRAPHS BY NATHAN KATSIAFICA

It’s holiday show season, and we have perhaps caught the biggest and heaviest this year on Buffalo’s annual two-day Every Time I Die show, Tid the Season, also known to most fans. more die-hard ETID (aka Etidiots) under the name “Shitmas.” Held in a converted grain mill turned into a Buffalo Riverworks venue, this year’s lineup for the December 10-11 shows was absolutely filled with a variety of acts spanning several different genres, from hardcore acts like END and Knocked Loose. , to Circa Survive post-hardcore act, OG Ice T hip-hop, and more, there was something for everyone to love!

The place itself was decorated with Christmas lights, with Every Time I Die’s “I” logo illuminated in green and red. In honor of the occasion, local brewery Thin Man released a lager So we go to war! nominated for a line in the band “All This And War” track of their last outing Radical. Additionally, local artisan Oxford Pennant had set up a booth stocked with Every Time I Die badges and on-site seamstresses sewed them onto fan clothing while they waited. Truly, it was an Etidiot’s paradise.

Tid the Season’s first night kicked off in the afternoon of Friday with a long line of eager fans ready to enter. The night’s festivities started off with a bang, with a performance by the punk duo ’68. Guitarist and singer Josh Scogin warned the audience that things were about to get noisy as he launched into their set, telling them, “Cover your ears and hold your butt!”

’68 is a band that translates much better live than on recordings. Scogin and his bandmate (drummer) Nikko Yamada, although both very talented musically, are absolutely bonkers live, with Scogin sneaking and stomping on the stage, and Yamada playing more or less the real life Animal of the Muppets. It was performance art, not just music, and the crowd ate every minute of it.

After that opening salute, the barrage of high octane performance continued as hardcore Texan actor Kublai Khan emerged to trigger a punishing set. The band’s music, reminiscent of metallic hardcore from the 90s, got the crowd moving and opened the first mosh pits of the night with one of the most hilarious mosh calls, which is probably not worthy of being. published here! If you haven’t seen them live yet, you can catch Kublai Khan on tour with Knocked Loose next spring.

Things then went from heavy to strange reprieve. Definitely the odd band that night, Mariachi El Bronx gave a set not of punk rock like many of the same musicians would the following night (playing as The Bronx), but of mariachi music. Seeing frontman Matt Caughthran hum instead of jumping around the stage was shocking, but it was a great set of live music, even if it was a complete change of pace.

Unfortunately, due to a positive last-minute Covid test, Poison the Well announced that they were dropping programming the day before. Instead, fans were treated to Buried Alive, the hardcore band from Buffalo 90, with none other than Scott Vogel of Terror on vocals. After reforming in 2020, it was the biggest show of the group, performing to a sold-out hall with some 5,000 people in attendance, and they were amazing! Vogel and his band mates were so impeccably tight, it’s no wonder the members of Every Time I Die were so fond of it. My only complaint is that I wish the whole thing was longer!

Circa Survive came on for the last support set of the night. Frontman Anthony Green was on hand as the band exploded through a 10-song set that contained a bit of everything in terms of discography, “Imposter Syndrome” and “Drift” from their latest release, A dream of love, to “Stop the Fu * king Car” and “The Difference Between Medicine and Poison Is the Dose,” from their first two feature films, to name a few. There were definitely some Circa Survive fans in attendance, judging by the volume of crowd participation, be it chanting or crowd surfing, especially for the closer ‘Get Out’ set of years. 2010. Blue sky noise.

A curtain fell with a roaring fireplace projected over it, and the change of scene for Every Time I Die began, out of sight. The mood in the venue was electric as fans eagerly awaited the first of the group’s two headlining sets which would take place by Sunday morning. Finally, with the opening notes and the opening line – echoed by a thousand or more voices – “Spare only those I love, kill the others!” ” from Radical the opening of the album “Dark Distance” sounded, the curtain fell and all hell broke loose.

If you haven’t seen a hometown show from Every Time I Die, it’s even more energetic than normal (which is already a high bar). Considering that this crowd was made up entirely of Every Time I Die devotees, you can see why the words fail to convey the pure passion that ricochets between the band and the audience, multiplying a hundredfold throughout the night. If there was any friction between the band members, as recent public tweets have suggested, it was not apparent at any time that night or the next. As the band made their way through a 26-song set, they only paused briefly to smile and at times gawk at the intensity with which the crowd sang their lyrics to them, surfing the crowd and moshing. Guitarist Jordan Buckley was in his usual form, leaping and struggling on the stage as he and fellow guitarist Andy Williams strummed a cacophony of delicious dissonance.

In the past I’d seen some great performances from the band, especially frontman Keith Buckley, but it sounded perfect tonight, whether on more recent tracks like “Post-Boredom”, “The Whip” and ” Planet Shit “. or fan favorites like “The Coin Has a Say”, “Floater”, “Ebolarama” and “We’rewolf”. The deeper cuts would come tomorrow, because Friday night was a night for the hits. As they had done for their series of tour dates before that, Every Time I Die was joined by Scogin, resuming their guest spot on Radical “All That and the War” track. The night’s festivities at Riverworks ended with this, but continued with many dives in downtown Buffalo until the wee hours of the morning.

The best musical reissues of the year, from The Beatles to Philly soul to The Roots | Ap

Not-for-profit organization founded in honor of Jim Thorpe, along with strategic partners, brings new water-producing technology to communities on the Pine Ridge Reservation