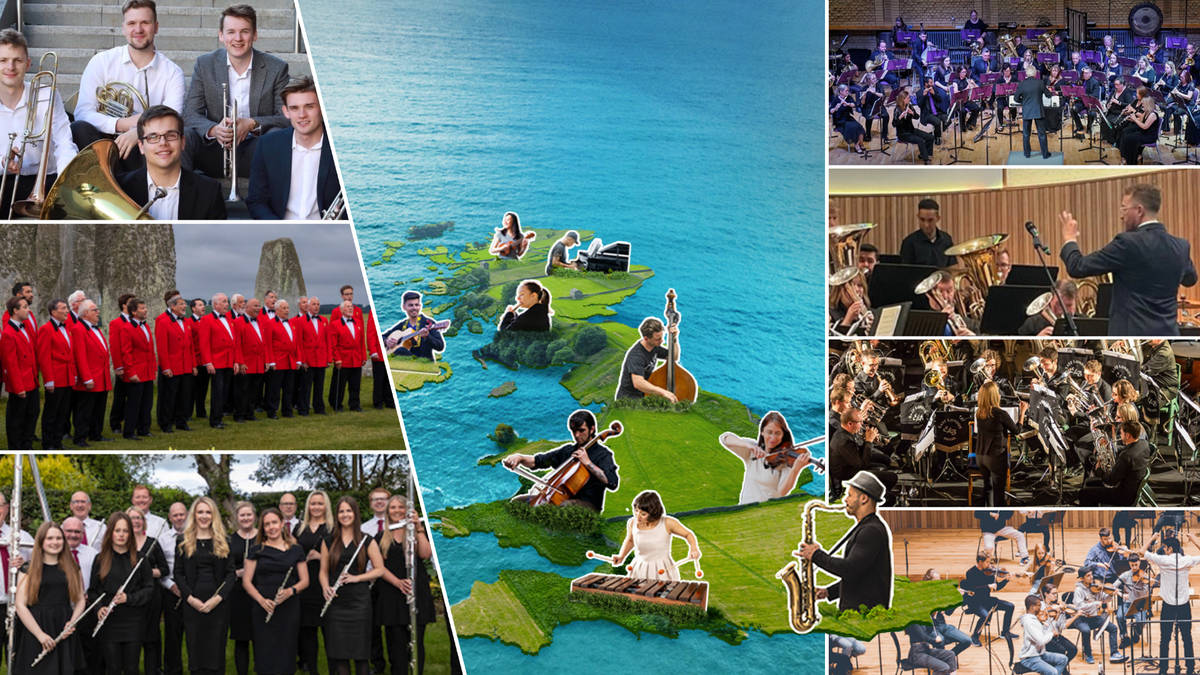 As part of Classic FM’s 30th anniversary celebrations this year and to mark the Queen’s Platinum Jubilee, we wanted to celebrate music creation across the country.

A wide range of musical groups, from brass and wind bands to choirs and chamber groups, have submitted recordings of their performances. They were judged on their skill, musicianship and choice of repertoire by an esteemed panel of music experts, including Classic FM presenter Myleene Klass, composers Debbie Wiseman and Paul Mealor, bandleader Ken Burton and brass musician Carol Jarvis.

The recordings of the winners will be presented by Classic FM over the next few days. They will also be sent to Her Majesty the Queen, known for her love of amateur music.

The seven winners of Britain’s big platinum performance are:

A postal worker, a solicitor, accountants, teachers, students and pensioners all contribute to the incredible ensemble of Carluke Primrose orchestral flutes in Scotland. The ensemble was formed by a group of South Lanarkshire residents in 1938, who were mostly miners from the Castlehill colliery. They save on their wages, organize sales of garden produce and go door to door to raise funds for the first instruments. Their current conductor is Emma Kennedy, from the ensemble. Together they have recently performed in concerts and competitions including the Glasgow Music Festival and the Scottish Concert Band Festival.

The ensemble said their win “gives us a fantastic opportunity to showcase the unique sound we create using eight different types of flute. We hope Her Majesty and listeners enjoy the show and maybe even be inspired to learn the flute themselves!

The London Welsh Male Voice Choir was formed in 1902 and quickly gained a reputation for excellence in performance and competitive success in England, Wales and Paris. Disrupted by the two world wars, the choir was re-established in 1961 and today has over 100 members. The choir has performed in many of Britain’s most prestigious concert halls and cathedrals and has performed twice at the Royal Variety Command Performance. Every two years the choir organizes and hosts a festival of male choirs at the Royal Albert Hall, which attracts choral participants from all over the world.

The choir said: “We feel humbled to represent the male choir genre across the UK and Song Country, Wales, where some of us are from. At a time when choirs are working hard to regain a sense of ‘normalcy’, what better way to celebrate than by making music for Her Majesty’s Platinum Jubilee! ? We hope you enjoy our performance.

This group of musicians told us that playing together is above all “community and family”. The musicians rehearse once a week in Walthamstow, east London, but are also proud of the relationships they have outside the rehearsal room. East London Brass is run by Jayne Murrill, a renowned freelance trombonist who has performed with many of the UK’s finest orchestras and bands. Under his guidance, these players competed across the UK and Europe.

“Winning means a lot to us as a community of amateur musicians,” the band said. “Marching bands across the country and around the world are making incredible music, innovating and constantly pushing the boundaries. It’s a fantastic opportunity to show it. »

This orchestra of 45 musicians was created in 1992 by its musical director, Keith Allen, in order to meet the demands of musicians in the region wishing to play with a high quality wind ensemble. The orchestra is made up of musicians living and working in and around Birmingham, as well as some who travel from all over the UK to help create music. The musicians pride themselves on the quality and variety of the music they play, with a strong dedication to creating and performing contemporary works for wind orchestra.

“We feel privileged and honored to be one of the winners,” the ensemble said, “and it’s a credit to the musicality of the musicians. The orchestra celebrates its 30th anniversary this fall and this distinction gives us even more reason to mark the occasion in style. Thank you!”

This group from West London has 27 members. The average age of the group is 25 to 30 years old and it is mainly made up of those who have moved to the national capital for work or study. Together, they perform in a mix of events, including community events, self-promoted concerts, and private functions and competitions, and have recently been promoted to the championships section (the highest level of marching band), for the first time in the group’s 125-year history.

“When the marching band is done well, it offers so much to local communities and the wider musical world – we are thrilled to represent our own realm of musical creation!” the band told Classic FM.

This brass quintet was formed in 2016 and is made up of students from the Royal Birmingham Conservatory. Its players come from all over the UK, including Portsmouth, Basingstoke, Manchester and Birmingham. The quintet loves to showcase the versatility of a brass ensemble through great music, virtuosity and creating captivating and entertaining live performances. Curzon Brass also gives workshops to primary and secondary schools, hoping to inspire the next generation of musicians.

The ensemble told Classic FM: “Being the winner of this award means a lot to the band and it’s a huge honor to have the opportunity to perform a piece of music for Her Majesty The Queen in her 70th year on the throne.”

These Manchester-based musicians define themselves as a 21st century chamber orchestra. The ensemble was formed during the COVID-19 pandemic and aims to bridge the gap between chamber collective and full symphony orchestra. Composed of students and young graduates, Carme Ensemble places collaboration at the forefront of its action. Ultimately, this new orchestra says it wants to support and promote all of its talented young musicians, and help them all take their careers to new heights.

Young composer Sam Kane, who is part of the ensemble and composed the winning piece ‘Three Northern Landscapes’, said: “I am so excited to share with people my interpretation of the beautiful landscapes, and I am extremely happy that people can hear more of the Irish language through music.

“A vital part of the nation’s musical ecology”

Announcing the seven Big Platinum Performance winners in Britain, Classic FM editor Philip Noyce said: “As we celebrate Classic FM’s 30th anniversary and mark the year of queen’s platinum jubilee, we are delighted to present some of the greatest of the talented musical groups with Britain’s big platinum performance.”

Barbara Eifler, Managing Director of Making Music, said: “The sheer variety of party music submitted for Britain’s big platinum performance is a beautiful testimony to the dynamism and richness of the British leisure music scene. The contribution of amateur musicians to their communities is a vital part of the country’s musical ecology, and we’re thrilled to have partnered with Classic FM to bring some of these exceptional bands to millions of listeners, as well as to Her Majesty. ”

The nation can hear from all of Britain’s Big Platinum Performance winners. They will be featured on Classic FM over the next few days, beginning with East London Brass on Classic FM’s More Music Breakfast with Tim Lihoreau on Wednesday August 10th. Aled Jones, Anne-Marie Minhall and John Brunning will also present the winners of their shows that day.