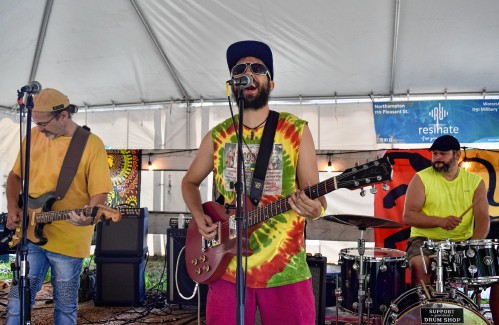 CHARLEMONT — Fourteen musical numbers performing on two stages helped celebrate the 25th anniversary of the Charlemont Reggae Festival on Saturday, sharing the message of love and positivity in music.

Hawks & Reed Performing Arts Center in Greenfield sponsored the event along with Resinate, a cannabis company in Northampton and Worcester.

Organizer Francis DeAngelo said he had been preparing for the Charlemont Reggae Festival for months.

“What makes this event so special is that we can get together again and see live music,” he said. “Live music has been the hardest hit by the pandemic. To be able to play again is amazing.

The original organizer was Ras Jahn Bullock, of Loose Caboose and later member of The Alchemystics, who organized the unique event in 1985. Then in 1995 musician Abdul Baki – who performed at that year’s event with his band, Root Fiyah – founded the current reggae festival which continues to this day, except for a two-year hiatus amid the COVID-19 pandemic. Hawks & Reed took over the event in 2019.

“We are here to do community outreach and brand awareness,” said Dave Dumas, general manager of the Northampton site. “As the prices go down, you have to do it out of passion.”

Matt Nichols attended the festival with his entire family from Brattleboro, Vermont. He played keyboards in the band Tuff Riddim International at Jammin Stage on Saturday. When he’s not performing at an event, he runs a cafe in Brattleboro called Love Buzz, where he plays reggae music and serves organic tea and coffee.

“I love music because it’s the simple message of love,” Nichols said.

“I sit back, relax and let my mind get creative,” she said of her work. “I never know what I’m going to end up with.

“It’s a great family event,” Duah said of the Charlemont Reggae Festival. “That’s what this music is about: family.”

Festival musicians have come from near and far. Headliners EarthKry hailed from Kingston, Jamaica, and made Charlemont a midway stop on their US tour.

While the headliner came from afar, most of the artists were local bands. Keyboardist Jason Metcalf has played with the bands Rhythm Inc., Dave Noonan’s Green Island, Shanti Starr, Burnie T. and The King and Crown Prince. He played at the Charlemont Reggae Festival for 15 years.

“I love the feel and the groove of the music,” he said. “I also like the message of reggae.”

“I love the body-focused musical style of reggae. It’s meditative; it puts you in a transient state of mind,” added Dan Thomas, a guitarist with Dave Noonan’s Green Island who lives in Easthampton. reggae has always sent a great message, looking at history, even the darker sides always have a positive ending.

“I love this festival,” Thomas continued. “It’s great to get together at the end of the summer, enjoy the music and have a day outside.”