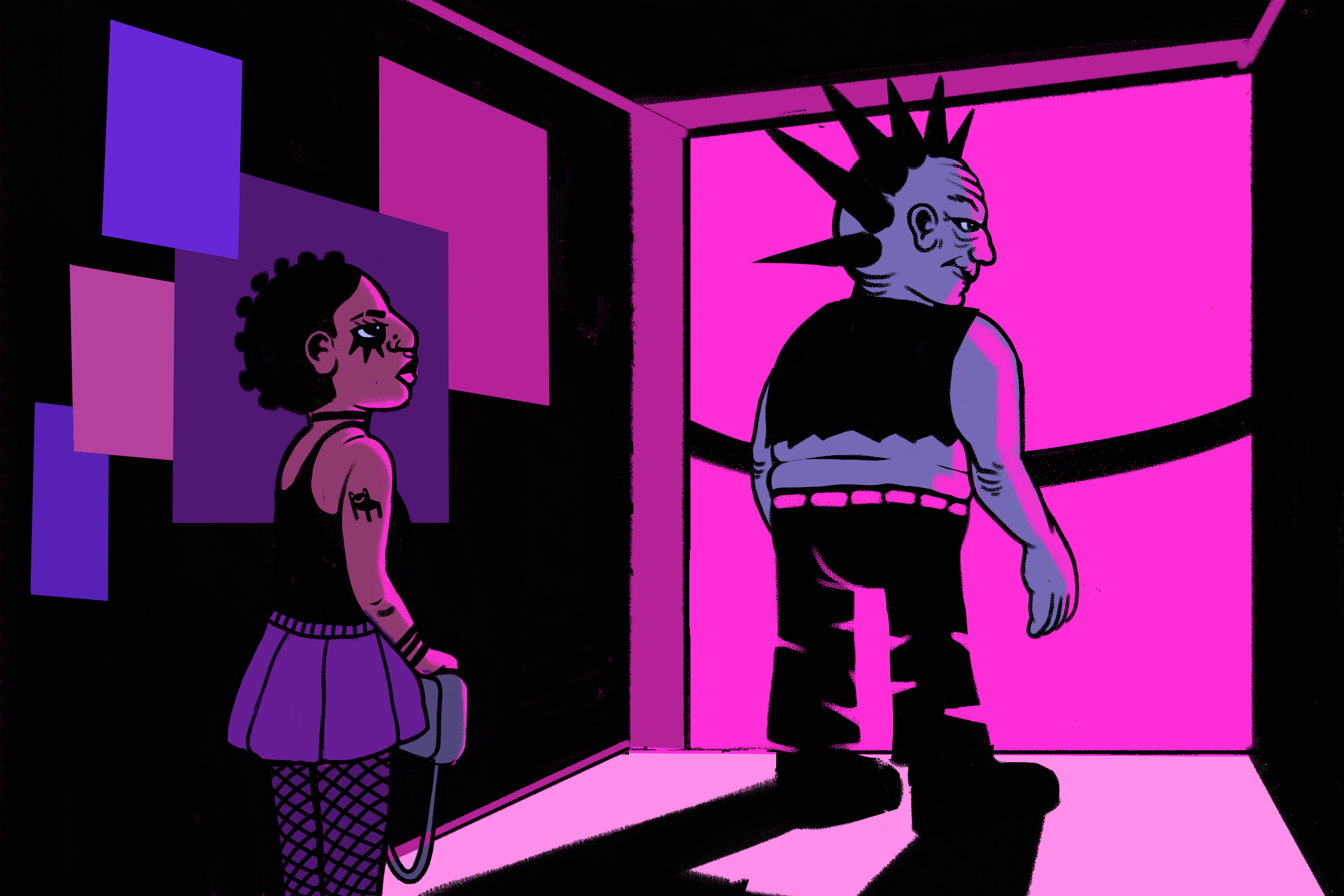 Loneliness, at one time or another, has played a central role in the lives of many people. Whether it’s actual isolation or a fear of it, it influences how people perceive their social interactions and the value of their lives. How lucky we are that music exists! “Outsidership,” especially when viewed through music, is strangely a very connected experience at times, realizing that you and others see the world the same way. And there have been so many fantastic musicians (Nirvana, Radiohead, Velvet Underground) who deeply express their own personal experiences as an outsider. Much of rock, indie rock, and grunge was founded around this sentiment. The more specific you are, the more a general audience can relate to.

My anger rises when these groups (so often white, straight and male cis) or their fans pervert the “underdog” label and take it for themselves. It most certainly has to do with feeling completely individual – but everyone is an individual in their own right. Pop music listeners are also individuals in their own right. Taking the label of “outsider” and keeping it to yourself is not the goal of most of these groups. Ironically, being an underdog is a shared experience. It is widely shared by women, people of color, and members of the LGBTQIA + community. I have certainly walked into many rooms in my life that are full of men and immediately felt an uncomfortable twinge as I reconsidered how to relate to them in conversation, or whether to remain silent instead. And there are a lot of fans of these bands, and some bands themselves, who don’t fit into any of these categories and refuse to recognize outside identities besides their own. While we may all at some point feel hopelessly lonely, there are some who are born into it and can never escape it. It creates certain groups and listeners that thrive by making people feel uncomfortable. By communicating their own emotional experiences, they are using too much anger, not enough empathy.

In writing this I am not trying to attack anyone’s social experiences. Some prefer to exist mostly or entirely on their own. Some people thrive this way and don’t need the people in their day-to-day life to enjoy their existence. Some have become lonely because others don’t talk to them because they think they are different or weird, which in turn leads them to talk to fewer people, then fewer, then almost no more at all. . These are not the people I’m talking about, and I don’t already want to criticize them. The ones I am referring to are those who use their “foreign” mindset to aspire the joy of art for others.

I have met countless people, often men, with a superiority complex over the music they listen to. They despise pop music, dismissing it as pap. At one point, I bought into that. Entrenched in the male-dominated punk world before realizing how deeply problematic it is, I embraced a bitter outsider mindset that despised pop music, which I uttered with a peculiar derision. Then, amid the discovery of the use of swastikas and iron crosses by the bands [COPY: need a link here] like the Ramones and the Dead Boys in the CBGB punk scene in New York (documented by Legacy McNeil and Gillian McCain in “Please Kill Me”), [COPY: need a link for the book] or Sid Vicious from Sex guns, I realized how much they screwed up this culture. The swastika, as they tried to explain, served as a symbol to shock people. [COPY: link] Obviously, this is absolutely no excuse. In their anger, they alienated those who had already suffered trauma and hardship, who had literally been driven out of society and tortured and persecuted.

They claimed the underdog label as their own, making the punk scene an even worse place for people with genuinely marginalized identities. As discussed in Todd Haynes’ new documentary “The Velvet Underground”, The Factory, directed by Andy Warhol and producing bands such as The Velvet Underground, was a toxic place for women, a place they were only appreciated for. their appearance. When you see a whole music scene full of white people, or full of men, it’s not because there weren’t any marginalized identities that wanted to be part of the scene. This is because there was a lot of racism or sexism or whatever -ism involved. When the majority of listeners are men, it is worth asking yourself Why.

Sometimes culture is formed by the group. But other times it’s misinterpreted by fans. Especially with sensitive subjects, no matter the intention with which the artist has created, and more how the general public probably interpret the lyrics. For example, Nirvana’s Kurt Cobain was a devotee feminist, and wrote “Polly” and “Rape Me” (both stories about sexual violence) as major sexism. He believed that men should be educated not to rape, rather than asking women to protect themselves. However, the lyrics of these two songs are incredibly inflammatory. While he wanted them to be stories of women defending themselves, this is certainly not their only or even their most obvious interpretation.

Bands in such positions of importance have a lot of influence, and when they release something, it will surely be interpreted in a million different ways. The source also matters; while chatting with a friend, he noticed that these would probably have played out very differently from Courtney Love songs, rather than Nirvana songs. Even though Cobain intentions were good, these songs can probably serve to fuel something terrible in some listeners and disregard his responsibilities as an influential male artist.

Even though the predominantly male white groups that filled these genres were not bad people at all, few of them considered their dominance of these musical genres. It is thanks to this that a whole counter-movement was formed (that of the riot grrrl) and is still in progress. When looking for indie rock bands in the ’90s, you have to choose from legions of prominent white men, before reaching people with identities society has automatically viewed as underdogs. For example, Long-finned killie, a ’90s indie rock band led by black gay Luke Sutherland, has just 1,470 monthly listeners on Spotify. Although they have made significant strides towards inclusion in one of the whitest, most male dominated genres, his name and that of the group are virtually unknown. It is this form of sexism, racism, homophobia, transphobia, etc. which is the most widespread: that of simply not considering the space you occupy, and whose voices are not heard.

When I think of “pop star”, I first think of a female pop star. This genre has influential women with strong voices, who increasingly use those voices for good and refuse to bow to the industry. They celebrate love and good times – things revered across genres, but shunned when very feminine women sing about them with autotunes and synths. That’s why when men tell me how much they hate pop, part of my brain wonders if it’s just internalized misogyny. After all, the Beatles were at one point dismissed as a “boy band” because their listening was predominantly female.

Recently, on the second day of an 11 hour road trip, my girlfriend and I chatted about her love for pop music. “I love to talk about art and share my passions for it in conversations,” she said. “Pop music is just an art that everyone knows and that a lot of people love! It just widens the scope for love and discussion about it, ”she concluded with a smile. It was one of those seemingly simple statements that left me thinking for a long time and made me want to write this play. Art is a way to share feelings. Although much of the art is based on an idea of ​​“otherness,” most of the time it is an invitation to experience feelings together. Making art is a very personal thing, yes, which can exist on an exclusively individual level. But the share art can be one of the most basic forms of communication – by being understood, whether through a song, a movie, a book or a painting, you are no longer quite alone.