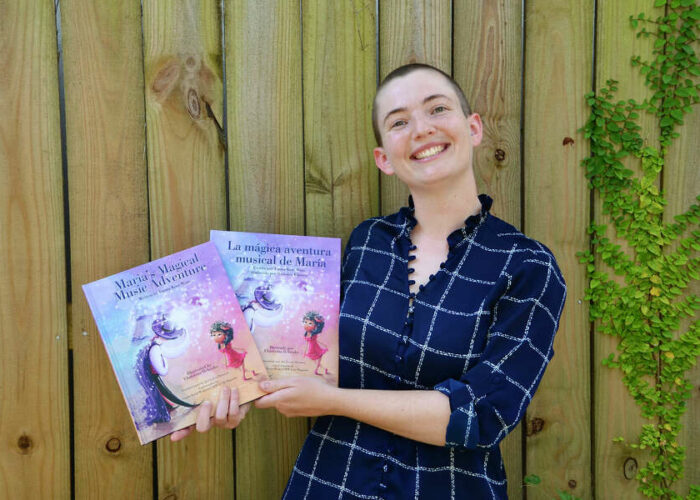 Last fall, local composer Emma Kent Wine put pen to paper to begin her next creation, but before there was music there was an enchanting children’s story.

She imagined an adventure through time, writing about a curious young girl named Maria who returns to the Baroque era to meet Venetian virtuoso Antonio Vivaldi with the help of a musical magician.

“Maria’s Magical Music Adventure,” commissioned by Ars Lyrica Houston, is now available for purchase in English and Spanish, and on the afternoon of November 2, the early music ensemble will celebrate its official launch by hosting a fundraising lunch at Tony’s, an iconic Italian restaurant in Upper Kirby. While guests enjoy a gourmet meal, Wine will deliver a reading from the delightful tale, which will be accompanied by a live string quartet and followed by a book signing.

“I wanted to inspire children and adults to think about how history is made and experienced both in the present moment and hundreds of years later,” said Wine, who as lead of operations and outreach at Ars Lyrica, is eager to share her enthusiasm for the classic. music and hopefully sparking people’s imaginations in the process.

The book is on sale for $25 (plus shipping, if applicable) in English and Spanish on the Ars Lyrica Houston website: arslyricahouston.org/shop/maria

Although she never considered herself an author, Wine relished the opportunity to step back in time and reflect on what might have captivated her young self. First compiling her thoughts into an essay of several hundred words, she narrowed the narrative down to make it digestible for children before turning to music. For the accompaniment, she composes some original musical interjections and arranges excerpts, notably the recognizable theme of spring, from Vivaldi’s “Four Seasons”.

“The book has a bit of everything,” she said. “There is adventure. He has music. It encourages reflection on emotions, history and social studies. It’s also very Houston-centric.

Guided by a magician named Matthew – after artistic director Matthew Dirst, who founded Ars Lyrica in 1998 – Maria travels to 18th-century Venice, where shimmering waterways reflect the starry sky. Houston is her home, however, and references to the city of Bayou are sprinkled throughout the text as well as in the dazzling drawings by Ekaterina Ilchenko, an illustrator based in Europe. Whimsical scenes featuring Texas wildflowers are intercut with those of an Italian court, where revelers are dressed in clothing inspired by authentic Baroque fashion.

Not only does this concept of time travel align with Ars Lyrica’s mission to create experiences around Baroque-era music played on period instruments, but the children’s book also reinforced the organization’s impact in making early music fun and accessible to audiences of all ages. . The project – whose idea came at the suggestion of board member Kwan-Wong, a local magazine publisher and philanthropist – quickly grew into a multi-disciplinary endeavor that continues to expand community programming and whole collaborative partnerships.

In addition to being featured in an episode of Ars Lyrica’s “Musical Storytime” virtual series, “Maria’s Magical Music Adventure” can be experienced live, accompanied by a string quartet or a solo musician, through family reading events across the city, one taking place during the Menil Collection Neighborhood Community Day in April. This spring, the tale will also come to life on stage in a world premiere play, directed by Tim Fried-Fiori and co-produced with the Express Children’s Theatre.

“This project ticks a lot of boxes for us. It’s a great, empowering story for children, and it’s a continuation of our efforts that we started even before the pandemic,” said Ars Lyrica Executive Director Kinga Ferguson, speaking of the group’s commitment. improve social-emotional learning.

“Houston is a cosmopolitan city, and we need to represent, promote, and deliver programs that focus on different cultures, languages, and ethnicities,” she continued. “We sponsor this project to improve the lives of Houstonians, and that’s what we’re all working toward.”