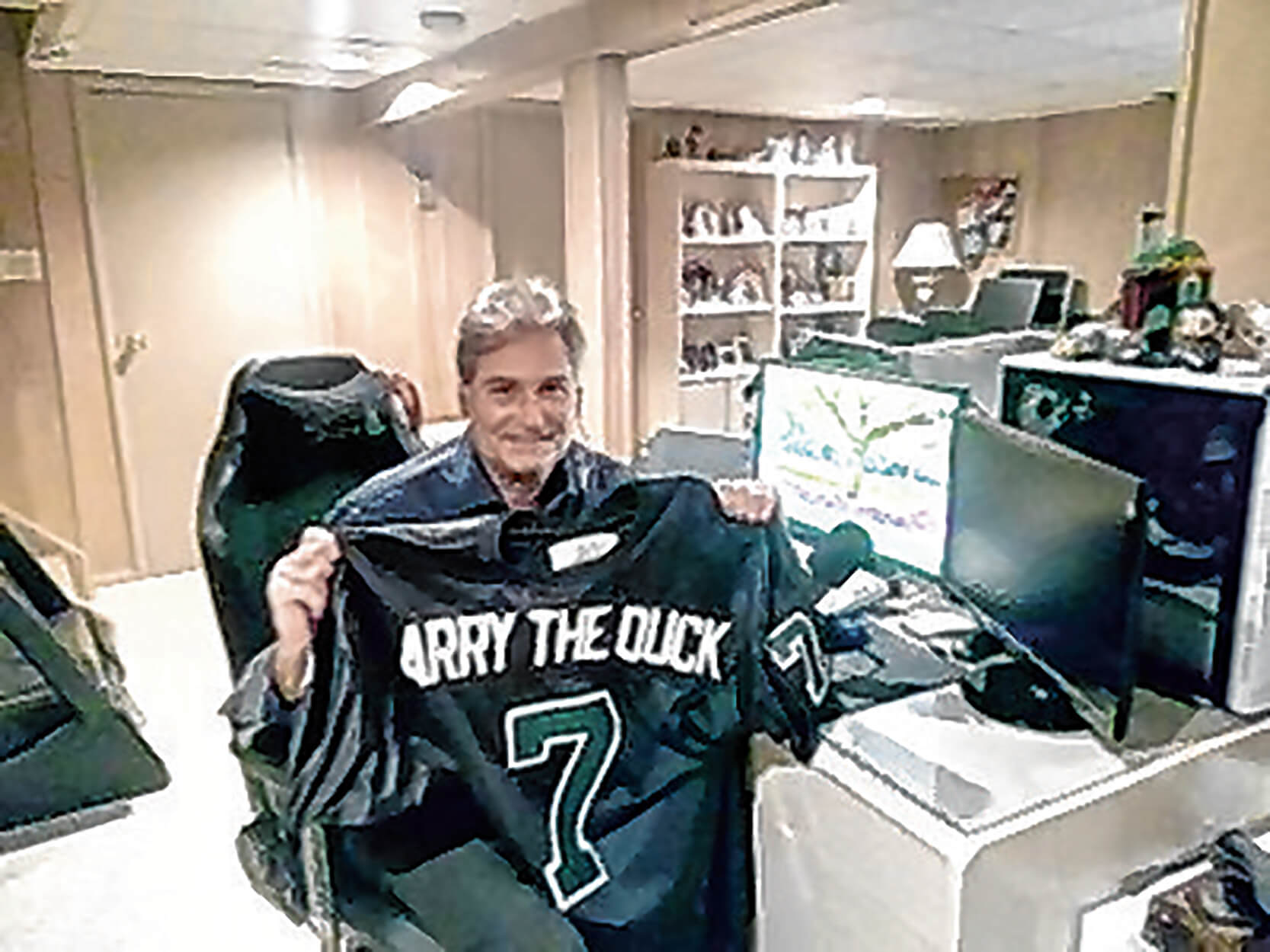 When it comes to life experience, Larry “The Duck” Dunn can lay claim to being a man who’s lived a handful of lifetimes. Best known as WLIR’s longtime music director for nearly all of the 80s, he continues to run the 5-9 o’clock shift on Sirius/XM’s First Wave 33 Monday-Friday, with the occasional Saturday .

Some of the career pit stops he’s made since resigning from WDRE in August 1991 (more on that later) include Newsday Media Group/Cablevision, Reed Elsevier (owners of NME and Melody Maker), Variety and Disney/Capital ABC of Cities. Most recently, he spent the past five years with Island Federal Credit Union, progressing to becoming a Certified Strategic Marketing Manager (CSME) after earning his certification three years ago in Seattle.

And although he never considered ending up in finance, the Massapequa resident embraced that world with joy.
“The world of credit unions is wonderful because it’s not-for-profit, whereas banks are for-profit,” Dunn said. “Because of this, our rates are much lower. We have many more free services. We report to members, while banks report to shareholders. This is an interesting and awesome model. Plus, credit unions cooperate with each other, which is why they have shared branches, not just here on Long Island, but across the country. We have toll-free ATMs, so you can go to other credit unions. And if you’re a Chase banker, you won’t get that with Citibank.

Dunn’s other passion for the past 12 years has been serving as Vice Chairman of the Long Island Cares (LIC) Board of Directors and ensuring that food insecure people are fed. While he rose to the job when he was senior vice president of advertising at Newsday after the person serving on the publication’s board of directors left, the North Merrick native’s connection to the organization dates back back when he was a senior at Mary Regina High School (which is now known as Kellenberg High School). It was here that he and future Nassau County Judge Bob Bogle met LIC founding member Harry Chapin, who was then performing shows to raise money for world hunger.

“I was the chairman of the concert at the time and Bob and I heard that Harry was doing these [charity] shows,” Dunn recalled. “He didn’t want to do the clubs because there was an associated cost. In the words of Sandy Chapin, who is the chair of the board and Harry’s wife, she always said that Harry liked high school kids because they were impressionable and they would get it. He wanted to play high school, so what happened was we got Harry Chapin’s number and Bob called and got Sandy on the phone. Can you imagine calling Harry Chapin’s home number? And then Bob and I learned what exactly was involved. We got the auditorium thanks to Father Mullen, who was the principal. He offered us the auditorium for a Wednesday afternoon at 4 p.m. That was before social media. We spread the word, sold the tickets and gave all the money to Harry.

This connection to Chapin encouraged Dunn to take up the LIC seat, a role he is proud of, especially given the harshness of communities affected by the pandemic.
“I had shaken hands with Harry Chapin so I felt there was this connection with Long Island Cares, especially with food insecurity now with what we’ve been through with COVID-19,” a- he explained. “We fed over 278,000 people during COVID-19 who were food insecure. It was over 19 million pounds of food. So I got involved, joined the board and got really passionate.

As the eldest of seven children before his family moved to Merrick as a child, Dunn’s energy and gregarious nature fueled his life’s journey. When told his parents couldn’t afford to send him to college, he worked full-time as a pharmacy technician at Mardell’s in Hempstead, which, unbeknownst to him, was a stone’s throw from WLIR, a station he had been listening to religiously in high school and until enrolling full-time at St. John’s University. Dunn’s tenacity saw him grow from WLIR trainee to become the youngest member of the on-air staff on June 1, 1979, when the station was broadcasting a progressive rock format and had yet to become the flagship of the new wave. 80s. Long before Dunn introduced Duran Duran to Madison Square Garden or helped break up U2, his early years on radio were a trial by fire, interviewing Van Halen and Ozzy Osbourne fresh off Black Sabbath. The turning point came in 1982 when program director Denis McNamara ceased to be one of five AOR stations in the market (the others being WBAB, WPLJ, WAPP and WNEW because, as Dunn put it, “How many many times can you play ‘Stairway To Heaven’?”) and embraced genres like synth-pop, post-punk, reggae, alternative rock and gothic, music that was downright ignored on the rest of the dial.

As the 2017 documentary recounts, Dare to be different—WLIR: the voice of a generation, it was a wild ride until the FCC revoked parent company Phoenix Media’s license in 1987. And while Dunn was brought back by the new owner to serve in an advisory role for programming and musical needs, his full-time ride status ended when a new program director handed Dunn a playlist and said that was what he was going to shoot. The concept was anathema to the LIR stalwart’s previous radio experience and led to his on-air resignation during the weekly Saturday night gig Dunn had shot at the Malibu nightclub.

“I’m not a quitter but I did something because I couldn’t take direction [at the station]”Dunn said. “Disabling a playlist wasn’t what I was hired to do. I was hired for musical freedom, knowing what to play at the right time, and artist sequencing. Dennis [McNamara] gave us the freedom to break artists. We may have been seen as the New Wave station, but we were the new music station. It was like doing A&R on the radio. We were always on the hunt for the next nugget of gold and that was part of the pride. It’s one thing to break it, but it’s great to play good music because without the listeners, what are you? You are an antenna that does not broadcast to anyone.