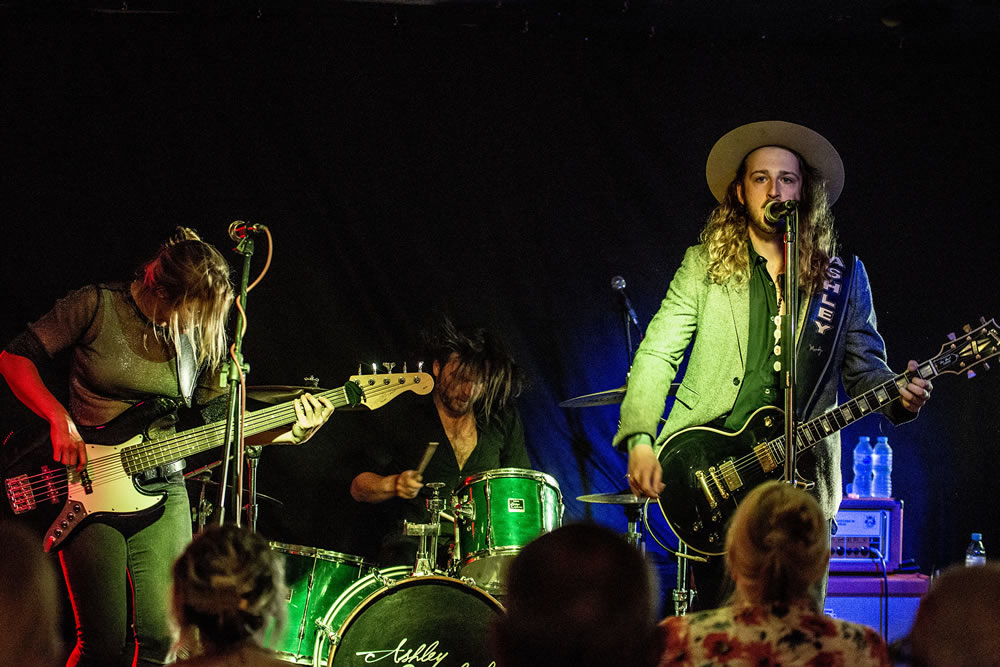 After eight months of forced hibernation, the Ashley Sherlock Band of Manchester stormed the top of Stockport. Originally planned as a single standing concert, the group split the event into two nights to adhere to social distancing rules, with both events being seated. Nigel reports for Louder Than War.

Able to be backed up by the funk-blues power trio (a phrase I’ll use more than once) TG Lee & The Rago Band, the concert is brilliantly put together, with Mike Swann and staff skillfully roaming the sweltering venue in making sure everyone is well watered!

Career through half an hour of punchy blues-rock with a heavy funk side, courtesy of the extraordinary Flea-inspired talents of bassist Jonny Hargreaves; the medium, led by TG Lee and backed by Dan Briggs on drums, wows this hungry audience. Many in attendance haven’t seen a live event in over a year, so witnessing the Firestorm virtuoso talents of these three is a revelation. It’s pure fun from start to finish; a big smile and a big heart from the leader, with the supporting cast head down pounding some of the sweetest beats you’ve ever heard!

I played a few Ashley tracks on my radio show so I kinda knew what to expect, but nothing prepares you for how these three come together on stage! There is something incredibly special about power trios (and voila, I did it again!). Without the help of a second guitarist, the three protagonists must be fully aware; in harmony, playing their every move. I wasn’t going to bring up The Experience because Ashley is a completely different player than Hendrix, but when you look at the energy drummer Mitch Mitchell puts into every performance, carefully seeking to follow the frontman; how Noel Redding sublimely woven his intricate basslines through the scrum, you begin to understand how the dynamics of this band work.

As complex as Clapton, as refined as Page, there is a sublime and jazzy way that Ashley delicately weaves her magic on the explosive riffs that are the highlight of this set. Featuring a mix of quirky blues from CSNY, Little Feat, Rory Gallagher and Robert Cray, right through to self-written tracks from the new EP, If You’re Listening (coming out Friday 9e July), Ashley knows how to wow the crowd. Combined with his incredible vocal ability, both Paul Rodgers and Ronnie James Dio, he oscillates between baritone and falsetto, the words falling effortlessly into the mic. It’s hot in the room and I love the way Ashley pulls a patterned handkerchief out of her back pocket to wipe her dripping forehead!

It’s easy to just stand there and play a bassline, but Charlie Rachel Kay knows how to play; perfectly augmenting the frontman with his own supporting riffs. After a slow start, drummer Danny Rigg enters an Animal-Moon zone, destroying his small battery in the process!

It is not all easy. Good Hearted Woman’s yeh-ha, thumbs-in-dungaree goes awkwardly with Ashley’s explosive southern blues. Invincible, an inexplicable power ballad also seems strangely out of place, but when the band returns with Fine By Me, it’s like Ritchie Blackmore’s guitar break in Lazy on Made in Japan. He’s back in the room!

The group finishes with Bad Penny, a classic of Rory Gallagher; then it’s over – almost an hour and a half of the best blues rock you’ll hear on this side of Nashville. The band proving that the scene isn’t all post-punk and silly, and that you can fill a room twice as long as you are good at!

Nigel Carr lyrics. More of Nigel’s writings on Louder Than War can be found in its author’s archives. You can find Nigel on Twitter and Facebook Listen to Nigel’s show on Radio Alty – Wednesdays from 9 a.m. to 11 p.m.