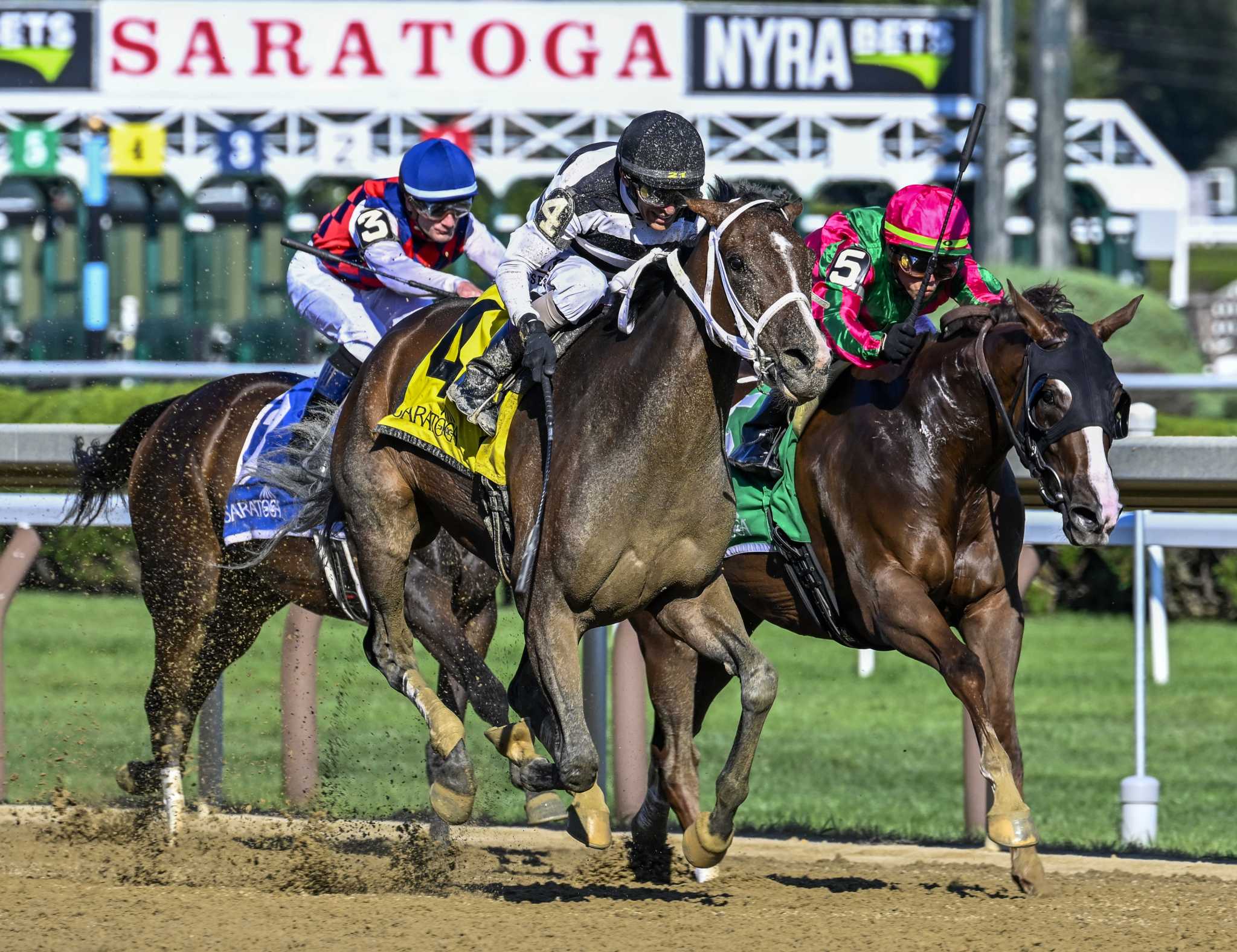 Soft music for the leader of the group

SARATOGA SPRINGS – The leader of the group took the lead past First to Act at the top of the final straight, then won the battle to the finish line in the $135,000 Summer Colony Stakes, one of the co -Friday footage from Saratoga. Hall of Fame jockey John Velazquez’ victory earned him a hat-trick for the afternoon.

After being pushed back in front of the starting grid, the 4-year-old filly followed the pace set by Evoutante for the first six stages. Velazquez swung the Bandbox girl five wide in the stretch and joined the battle with First to Act and Spa’s top rider Irad Ortiz Jr..

As the wire went on, he led the three-quarter-length strip on first to act at second place by a header to Bewitching. The band leader ran the mile and a furrow in 1 minute, 49.65 seconds on a fast track.

The victory of the flag carrier of SMD, Ltd. was his sixth in 15 starts. His paycheck of $74,250 in Saratoga put him over half a million in purse income, most of that money coming from races at Monmouth Park and Parx Racing.

After the photos were taken, the group leader’s trainer, John Servis, reported that the filly’s owner, Will Schwartz, “gave me the run and said, ‘If she’s okay, I would like to go to Saratoga. I said we’d play by ear. Coming this week, I said, “We’re going.” ”

The co-starring $150,000 Skidmore Stakes for 2-year-olds going 5 1/2 furlongs turned into a two-horse battle between Oxymore with Jose Ortiz on board and No Nay Hudson with Velazquez trying for his fourth score of the day.

Oxymore, a gelding son of Australian sire Astern, retired in the final sixteenth of a mile to win by 1 1/4 lengths as the 6-5 favorite. Irishman No Nay Hudson took second place by three quarter lengths ahead of Private Creed and Ricardo Santana.

Oxymore’s win was the second in a row of his two-race career and the second of the day for Mechanicville head trainer Chad Brown, who was on the track and tending to practice duties after being stopped. Wednesday night and charged with felony obstruction of breathing in an incident at his home.

Madaket Stables’ Sol Kumin bought Oxymore for $30,000 at Keeneland’s September sale last year. After the Skidmore, Kumin said, “It was a good buy. Looks like it’s going to go a little longer too. That’s what we hoped for. »

Brown agreed with Kumin, saying, “When you look at this horse, he doesn’t look like a sprinter, so I’m excited to bring him out at a distance. He looks like a pure road horse.

Kentucky Derby winner Rich Strike ran five furlongs in 59.82 seconds in preparation for the Aug. 27 race of the $1.25 million, Grade I Travers Stakes at Saratoga’s main track with the practice driver Gabriel Lagunes in the saddle.

Coach Eric Reed said: “He worked really well. It worked faster than we thought. But, he did it easily.

Love reigns in the field

Coach Wesley Ward brought Love Reigns into Sunday’s $150,000 Bolton Landing. The 2-year-old US Navy Flag girl is back from the Royal Ascot meeting in England, where she finished fourth in the $137,000, Group II Queen Mary Stakes with Irad Ortiz Jr. in the saddle.

Ortiz will once again race the Stonestreet flagship against eight rivals in the 5 1/2 furlong dash on the Mellon Turf Course.

Ward also signed Irish No Kay Never from Stonestreet, a first-time winner at Indiana Grand in May. Tyler Gaffalione will ride it.

Robin Sparkles is looking for another

Michael Schrader’s Robin Sparkles will be looking for another win in Saturday’s $150,000 Smart ‘N Fancy Stakes for older fillies and mares. In her last outing, the daughter of Elusive Quality made every pole a winner in the Grade III Caress Stakes in week two of the meeting.

Five horses went to the post in the first race on Friday’s card. Each of the young girls was eligible for $40,000.

Strong Light, the show horse, was claimed by Ten Strike Racing and its trainer Michelle Giangiulio. Psychic Income, the fourth, is now owned by Joseph M. Grant. His new trainer is Ray Handel. No codes were taken by coach Rudy Rodriguez on his own account.

Riot House of Amore Thoroughbreds, winner of a Gulfstream allowance in April, is back from its spring break. Trainer Danny Gargan is targeting next week’s $135,000 Better Talk Now Stakes at a mile on the Inner Turf course for horses that have never won a stake (other than National Breed) at a mile or more.

Riot House prepared for its engagement with stakes with a half-mile breeze on the Oklahoma grass course in 47.86 seconds on Sunday.

As soon as Friday’s sixth race was over, the stewards flashed the inquiry panel and Provision second rider Luis Saez claimed a foul on Eric Cancel, who rode Let’s Go Big Blue to victory.

The problem in the fault claim process was that George Weaver trained both horses – Let’s Go Big Blue for August Dawn Farm and Provision for Gatsas Stables, RA Hill Stable and John Gaspar.

After viewing the videos several times, the commissioners let the initial classification stand.