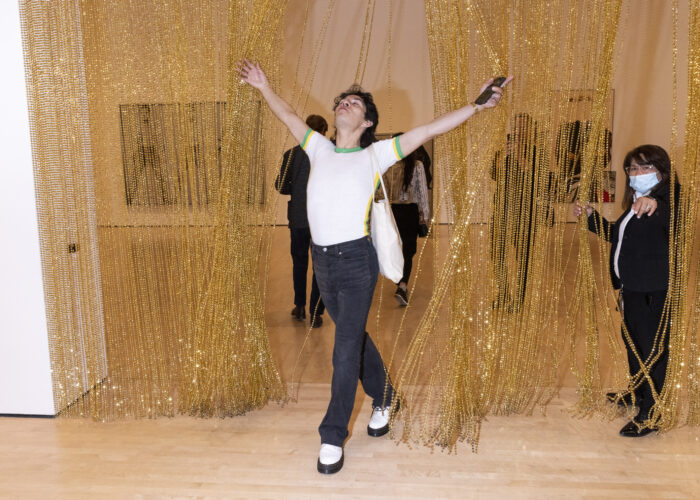 When Art Bash returned to the San Francisco Museum of Modern Art on Friday, April 8 — for the first time since 2019 — it drew crowds in full pre-COVID strength. For five hours, five floors of the museum were filled with unmasked revelers (verified by vaccination) dancing, drinking and watching performances and art activations throughout the building.

“It shows how much people want to come together and how important it is for culture to be a part of post-COVID San ​​Francisco,” said Janet Bishop, chief curator of SFMOMA.

But even amid the hard-hitting soundtracks of Bay Area DJ $picy, Miles Medina and Rcade that gave the institution a nightclub feel, the museum found ways to center the art for revelers. This included the stunning setting of dinner at Schwab Hall designed by 2006 SECA winner Sarah Cain, images set to music by Minneapolis photographer Alec Soth and musician Dave King (of Los Angeles-based Celtic band Flogging Molly) in their performance “The Palms” and San Photo-installation projected by Francisco’s documentary photographer Michael Jang in the White Box Theater.

From art cars and photography to performances by pop punk royalty, here are some of Art Bash’s most memorable moments.

Cain’s decor for the McCalls dinner party that started the night for some VIPS was one of the most stunning second-floor makeovers since SFMOMA reopened in 2016. The psychedelic, enveloping wall treatment was a much-discussed item.

“The wallpaper is from a painting I recently did called ‘Enter Lightly, Go Lightly,'” said Cain, who traveled from Los Angeles for the event. “I just kind of pulled it out of the atmosphere and put all the pieces together. And I asked for a purple carpet.

Cain also noted that Portland artist Shelly Pehrson, who created the paper flowers arranged in the People’s Pottery Project bud vases on the tables, also made the flowers that New York Congresswoman Alexandria Ocasio-Cortez wore. in her hair at the 2021 Met Gala with her famous “Tax the Rich” dress.

Schwab Hall wasn’t the only space undergoing a transformation. Several bathrooms in the museum have been given graphic art touches by Fernando Garcia’s San Ferncisco studio. In the red-hued men’s room on the second floor, an abstract vinyl mural took pride of place on the wall opposite the sinks and mirrors.

On the rooftop pavilion, San Francisco artists DJ Agana and Vogue spray painted their entry into the SFMOMA Soap Box Derby, which returns to McLaren Park on Sunday April 10, for the first time in more than 40 years. Their work, a moving truck design covered in tributes to San Francisco street art, was a nod to the many similarly graffitied vehicles still spotted around the city.

“Having graffiti in SFMOMA breaks stereotypes and stigma about graffiti,” Agana said. “And seeing art in motion in a group setting is amazing.”

Vogue admitted he found the painting in front of a crowd slightly nerve-wracking, but said it was worth it “if we can expose ourselves to more people and show them what we can do with a spray can”.

The combination of King’s piano and percussion with the images of Soth projected on the screen of the Wattis Theater made “The Palms” a highlight of the evening.

In one of the performance’s most moving moves, Soth superimposed photographs by New York photojournalist Weegee on an overhead projector and announced their titles with a brooding underline.

During the finale of another section, Soth immersed photos in trays of chemicals that slowly caused each image to dissolve, as if going through a process of reverse development.

The Los Angeles punk quartet performed a dynamic set in the atrium, which included songs “Never Say Never”, “No Clue” and “Talking to Myself”.

The all-girl group is between 11 and 17 years old and was accompanied by their parents, who proudly rocked on stage. The band ended their set by inviting Go-Go drummer Gina Schock on stage for a cover of “Tonight.”

“I’m in love with these girls,” said Schock, whose recent book and exhibit, “Made in Hollywood: All Access With the Go-Go’s,” showcases his work as a photographer. “I predict they’ll be the next Go-Go, they’re getting bigger and bigger.”

Cowboy Junkies will perform at the Music Hall in Portsmouth NH

In court and in the sky, tribe continues to challenge Line 3 pipeline