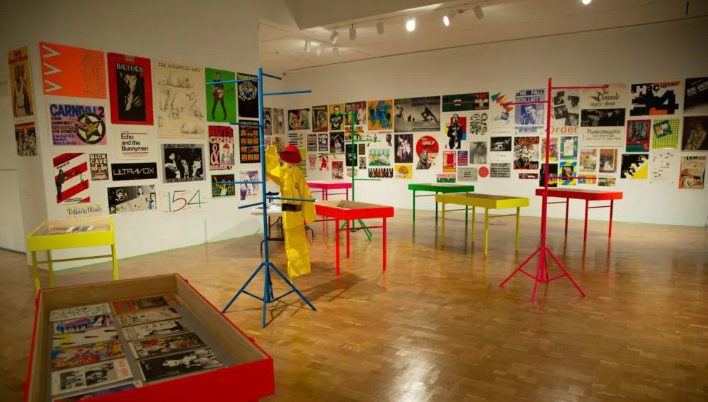 Curated and curated by California Institute of the Arts graphic design professor Michael Worthington, Torn Apart is the largest exhibition of punk and new wave graphic design ever on the West Coast. Featuring nearly 1,000 ephemeral pieces of graphic design produced between 1976 and 1986, mostly from England and the United States, the show includes posters, flyers, publications, zines, clothing, stickers and buttons from the bands, artists and media that helped define punk and new wave.

“And while the exhibit is to some degree concerned with the history of music, it is more than anything, very deliberately and unapologetically, a graphic design exhibit,” Worthington said. “This exhibition draws on the duality of graphic ephemera: both worthless and priceless, ubiquitous but treasures. What would one of us give to possess the lost treasures of our youth? These graphic works, made by trained and untrained designers, are the visual representations of a subculture at the height of its power. These works become index traces of our lost past, emotional tokens/totems that act as vehicles for time travel.

Beginning with the visual explosion that occurred when punk, both the music and the formative subculture, was born, Torn Apart follows the journey until punk implodes, producing a wide range of aesthetics and agendas in its wake, constantly penetrating mainstream design culture. As the exhibit explains, “the lasting influence and legacy of punk and new wave still lingers in the air today.”

The items were taken from author and collector Andrew Krivine’s Too Fast to Live collection, one of the largest private collections of punk and post-punk graphic design and memorabilia in the world. Krivine’s cousin John Krivine founded flagship punk stores Acme Attractions and BOY in 1970s London. Alongside posters and flyers of more than 70 influential bands and performers of the era, you’ll find vintage punk photographs by famed music photographer Sheila Rock.

On view until September 8, Torn Apart features works by well-known designers including Barney Bubbles, Jamie Reid, Malcolm Garrett, Peter Saville, Chris Morton, Vivienne Westwood, Mike Coles, Gee Vaucher, Winston Smith and Raymond Pettibon . It also features works by lesser-known designers in the United States such as John Angus, Martin Kaye, X3 and Alex McDowell, as well as pieces made by the musicians themselves and a plethora of unknown and uncredited designers, amateurs and professionals. .

Free and open to the public