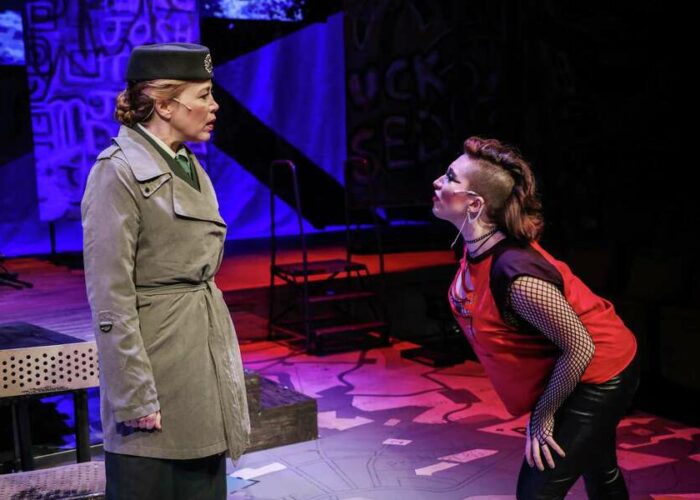 Review: ‘MacGyver: The Musical’ at Stages is a clever invention

Do you remember the TV show starring Richard Dean Anderson called “MacGyver” in the 1980s?

It was a time when we knew who our enemies (the Communists) were and we felt sorry for those who lived in oppression. MacGyver was handsome, friendly and pleasant. He had incredible ingenuity: he could find creative solutions to the most difficult situations, using paper clips and improvised inventiveness to solve the most difficult problems. He didn’t need any profanity or violence. He could “MacGyver it” – an expression we still use today.

But that was then and this is now. Before “MacGyver: The Musical,” the currently-running show’s sendoff to The Gordy, begins, we see big-screen photos of Cher, Tom Cruise, Ted Koppel, Joan Jett, all manner of wonders from the years 80s, backed up by vintage rock music. We are about to go behind the Iron Curtain so that MacGyver can help East Germans who are politically and personally oppressed.

East German punk band The Hamburgers (whose jackets are made of American flags) have their musical instruments set up center stage, and whether it’s an austere military office or a street full of graffiti, the scene design (Jodi Bobrovsky and Kirk Domer) works perfectly. You always know where you are on this show.

After going through a pandemic with MacGyver, it’s a good time for the nostalgia and energy of this show, a perfect blend of an outstanding cast, memorable comedy and music, with the added drama of MacGyver played by an audience member.

Zlotoff convinced McLaughlin that for the musical version they needed to “put a totally unrehearsed, untrained, but brave human at the very center of the story” – and a young woman from Huntsville played the role with good humor and enthusiasm, aided by a signal cards.

That choice could be a huge risk in itself, but production was already owed MacGyver with music and lyric writer Peter Lurye replacing another keyboardist, and Houston favorite and Stages veteran Mark Ivy taking the major role with aplomb. of Johann for another actor.

This fast and fun musical works not only because the actors have impeccable comedic timing, but the singing is terrific. They even sing with the right accents, which makes it even funnier. (Carolyn Johnson not only plays, but is also the dialect coach).

The plot revolves around two East German siblings (Ingrid, played by star Hannah Clarke Levine, and Johann, played by Mark Ivy) who haven’t spoken for years after the death of their parents who attempted to escape from East Germany for the west. They were adopted by their Aunt Hilde, an East German activist, played by the superlative Johnson, a Carol Burnett-level comedian who nails every number, not just musically, but with a mastery of demanding physicality in multiple roles. The choreography is cute, the lines funny, whether they talk about freedom or French existentialism (“not that it counts”).

Audiences will enjoy Lurye’s varied and wonderful songs and a cast that delivers. From the moving “On the Other Side”, a melancholy song about escaping the oppression of East German life, to hilarious numbers such as “Drink, Drink, Drink”, “We are the Tools” and the angry punk, these songs, well, they rock. The cast includes Broadway and TV veterans like Jay Aubrey Jones, the lively and talented Levine, Mike Dorsey, Brandon Grimes and Katrien Van Riel (all making their stage debuts) as well as the superlative comedic and musical talents of Johnson and Ivy. You couldn’t ask for a better cast of players for this original take on a blast from the past, and the cast alone is worth that trip down memory lane, when we really had heroes like MacGyver showing us the way out difficult times with humor and hope.

Doni Wilson is a Houston-based writer.

Indie band ‘let it all out’ to nearly 1,500 attendees – The Appalachian