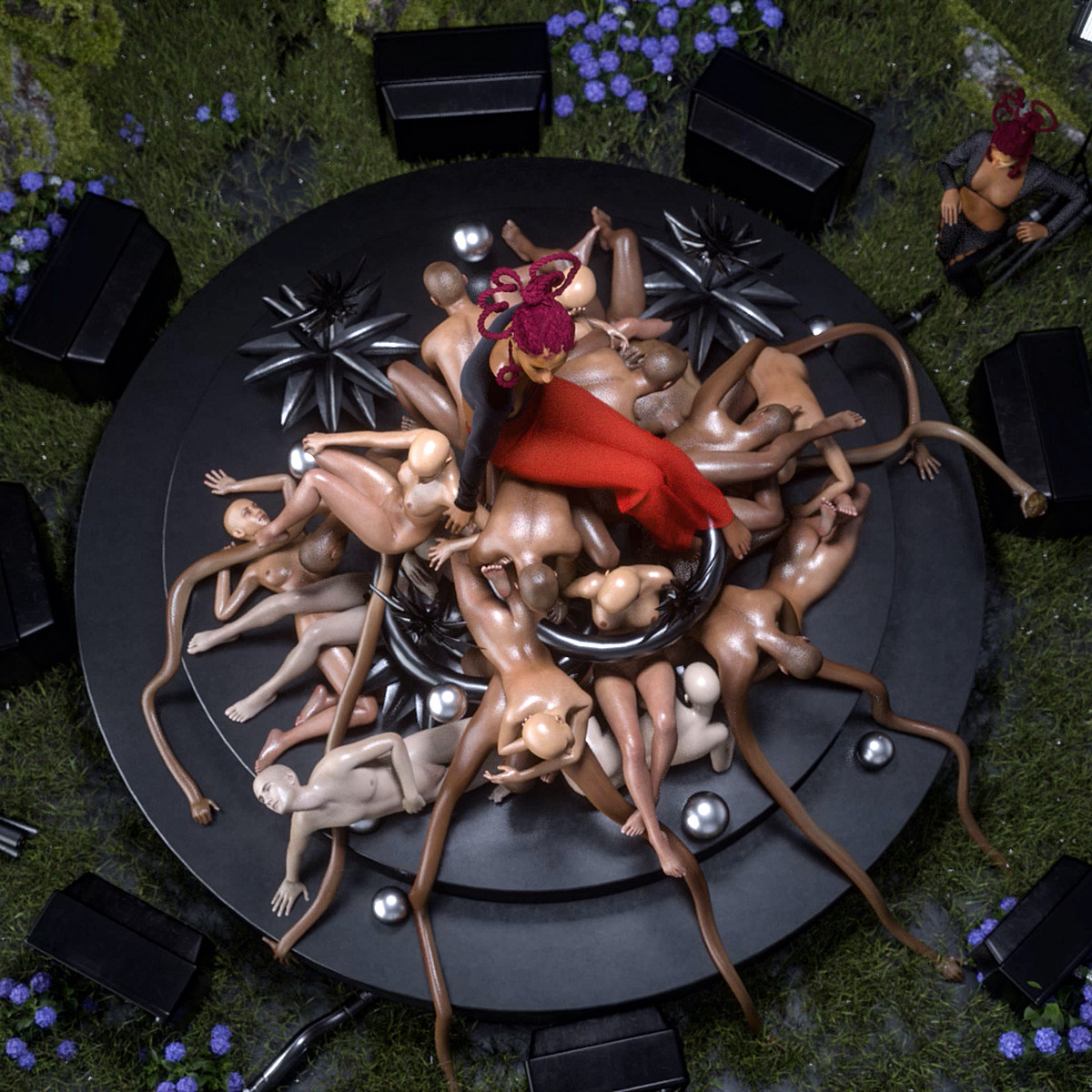 So many artists, so little time. Every week we review a handful of new albums (from all genres), round up even more new music we’d call “indie” and talk about what metal comes out. We post music news, track premieres and more all day. We are updating a weekly playlist of some of our current favorite tracks. Here is a daily summary with a bunch of interesting and recently released songs in one place.

Ravyn Lenae has teamed up with Steve Lacy for her first song in two years, and it’s a very cool dose of airy, woozy R&B.

New York rapper Junglepussy will release a new EP, JP5000this Friday (2/4), and she has just released her first hypnotic single, as bewitching as it is charismatic.

Animal Collective releases a new album boats of time Friday and just before that, here’s a final look. Like the other songs they’ve shared, “We Go Back” finds Animal Collective at its most inviting since probably Merriweather Post Pavilion. The video, directed by host Winston Hacking, is trippy and cool.

Lily Konigsberg (Palberta) and Nate Amos (Water From Your Eyes) team up as My Idea and will release their debut album, Cry Mfer, April 22 via Hardly Art. The effervescent title track and the album are about their collective decision to quit drinking. “The moment I thought I needed a big change and life change, like I was stuck in something, and I was right, I just did it. ‘a very bad way,’ Lily said. “And now what I need, I actually get, is by being sober and having a successful life. I was telling myself a lot of things through these words that were unconscious. I thought I was talking to other people, but I was talking to myself.

The LA Moonchild trio have shared a new song from their upcoming album carambola (due February 11 via Tru Thoughts), and it’s a warm, jazzy neo-soul song with a killer verse from rapper Rapsody.

Andy Morin is probably best known as the keyboardist and co-producer of Death Grips, but he’s also a solo artist and he’s released a new song with Backxwash, whose abrasive industrial rap is very fitting for a Death Grips collaborator.

Solo industry band Author & Punisher have shared another single from their upcoming album krüllerand this one adds an atmospheric, psychedelic touch.

Pennsylvania metal hardcore band Mind Power (members of A Life Once Lost, Dead End Path, Ligeia and Bring The Heat) are back with a new single, and it’s an overwhelming song with some weird, atmospheric stuff in the mix. mix too.

The Barcelona group Verdugo releases its first 7″ …are you peor enemy on March 1 via Triple B Records, and lead single “No Somos Iguales” is a classic ’80s hardcore-style ripper that feels totally urgent and vital in 2022 as well.

LA punks Spanish Love Songs announced hug faces etc.an album of reinvented versions of songs from the 2020s Brave faces for everyone, scheduled for April 15 via Pure Noise. Two tracks have been released now, and they’re both really cool: a synthetic version of “Optimism (as a Radical Life Choice)” and a folk and atmospheric version of “Generation Loss”.

San Antonio ska band Young Costello are the latest signatory to Ska Punk International, and their first release for the label is a fun trad-ska cover of Eddie Murphy’s ’80s hit “Party All The Time.” There is also a dub version of the Tape Girl track.

Arlo Parks pulled out the big Collapsed in the rays of the sun last year, and ahead of her tour with Clairo, she shared a new single, “Softly,” which she says “is a song about longing, about the fragility you feel in the final days of a relationship. while you’re still desperately in love. The song is about what it’s like to prepare before the hit of a breakup and reminiscing about the days when everything seemed bright.

Pictish Trail have shared a new song from their upcoming album Island family. “It Came Back” is funky, in the style of loud electro, and is inspired by real events. “I don’t have a TV at home, and so – while recording on the Continent – I was completely hooked on the flat screen hanging on the wall in my hotel room, constantly scrolling through Freeview channels. to avoid writing lyrics,” says Johnny Lynch, who is Pictish Trail. “There were protests in Bristol, loads of footage of helicopters flying, a heavy police presence. Having largely avoided the news for a year, floating unconsciously in the Hebridean desert, I was suddenly overwhelmed in this dystopian hellscape. Except it was real. Well, it was real on TV.”

New York psych/dance band Psymon Spine, which includes members from Barrie, took their song “Milk” to Hot Chip’s Joe Goddard to remix and he delivered a light and grooy track that just got better. with repeated listening.

Mylar are the latest additions to the Blue Flowers label that brought us Westerman and Nilufer Yanya, and they’re about to release their debut EP, Somewhere else, later this year. “Plastic Champ” is their laid-back, dreamy debut single.

Jerry Paper announced his new album, Free time, which will be released on April 15 via Stones Throw and is the first enjoyable single. “I wrote ‘Kno Me’ thinking about what it means to know yourself and how it clashes with the world’s misunderstanding,” says Jerry Paper alter ego Lucas Nathan. “I felt such a longing to be known and understood by people I’m close to (and, stupidly, strangers!) that I wasted a lot of time losing sight of myself in the process. that non-binary was a huge way for me to get to know myself deeply, and paradoxically something about sharing that with the world made me care less about how people see me. fuller of myself and nothing can take that away from me. The song’s imagery comes from the first day I decided to wear a dress outside while running errands. I kept repeating “fuck you, you don’t know me” to myself in my head whenever I saw someone as a way to center me. Soon I realized that most people just didn’t care. everything or weren’t paying attention to me, so it made me laugh and also feel really good and free!

Calexico released their 10th album in March. This is the title track.

Portland dream-pop punks Glacier Veins have announced their second album, Lunar reflectiondue out March 11 via Equal Vision, and you can hear more about the new single “Autonomy” here.

ABSENT IN THE BODY (NEUROSIS, AMENRA, SEPULTURA) – “THE ACRES/THE ACHE”

THE LINDA LINDAS – “GROWING UP”

Young punk band The Linda Lindas have announced their highly anticipated debut album and shared the title track, which you can read more about here.

Bright Eyes are re-releasing their discography on Dead Oceans, and they’re also releasing companion EPs for each album featuring new renditions of songs and covers where they’re joined by special guests including Phoebe Bridgers and Waxahatchee. They shared the first single from each of the new EPs (which you can pre-order, as well as the reissued albums, here.

En Garde, the emo/post-hardcore band from Akron, Ohio, made up of vocalist/guitarist Ross Horvath (of A Voice Like Rhetoric) and drummer Andy Hendricks (of Annabel), recorded their debut album in 2012, but it does not finally come out until February. via Count Your Lucky Stars / Storm Chasers LTD. Learn more about debut single “Wrong Places” here.

Pupil Slicer and The Armed have each released one of our favorite punk albums of 2021, so it’s great to hear that Pupil Slicer has just teamed up with The Armed’s Cara Drolshagen for a new song, “Thermal Runaway.” Learn more here.

Looking for even more new songs? Browse the archive of new songs.