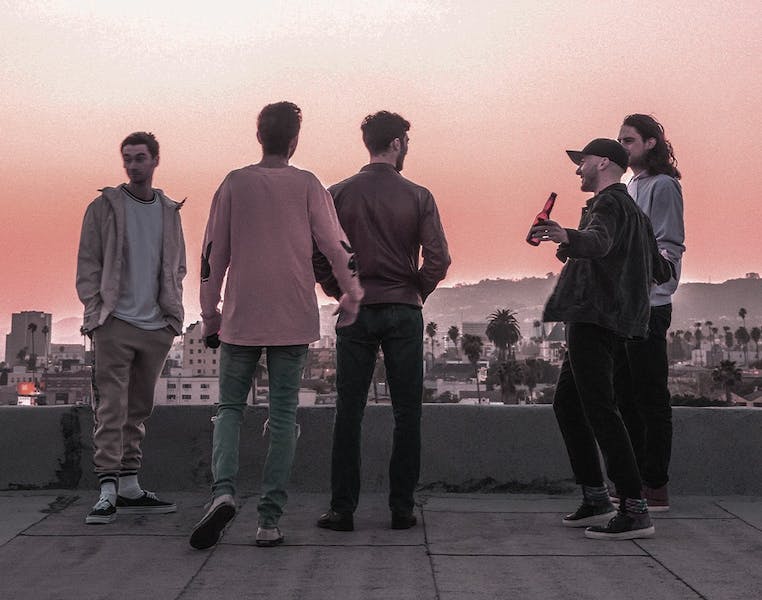 SaticÃ¶y is a three-piece group based in Los Angeles Ohio University elders and a member of the group they recruited from another group. It consists of Derek Long on vocals, songwriting and guitar, Jaron Takach on drums and production, Jon Averbook on bass guitar, and Tim Greer on keyboards and saxophone. Long, Takach, and Averbook were part of a group in OU, and after moving to LA, they formed SaticÃ¶y with recruiting Greer, from Philadelphia, whom they met in LA.

SaticÃ¶y has an EP coming out in November, so they’ll be releasing singles and music videos frequently in the coming weeks. The group is managed by OU alum, Macy Gilbert, who currently lives in LA and works in the music industry‘s timing and licensing business. The post office sat down with SaticÃ¶y to discuss the origin of the group and their current situation.

Long: We didn’t all go to OU, but Jaron, John and I did. Tim was someone we sniped here from another group. We went to media school for audio production, and that sort of set the stage for us to move to LA and find a job in media. Plus, we were in a group in Ohio which I think creates the real connection.

TP: Some say your music changes genre. Has it always been like this? How do you think you grew up musically?

Takach: I think we’ve experimented with a lot of sounds and I think you will see as you progress that the sound has become more concise. I would say it’s definitely more of an alt-pop trend or more alternative with R&B influences and the new stuff has almost a bit of grunge.

Averbook: The genre, I think that’s a good point too, because I feel like, even with our new road and what we’re doing, it’s still a little hard to categorize ourselves into a specific thing.

Long: It’s not so much a question of gender as of mood. You see playlists that a lot of people make that are more based on moods than genres. Like you can have a punk song with hip-hop drums and still call it punk. It’s more about how music makes you feel these days.

TP: You recently signed a publishing contract with Universal Production Music. How do you feel about this?

Long: It’s the first deal they’ve ever done with a band like this, which is really interesting. So we’re kind of pioneers for that kind of a deal, but basically they’re just going to represent us for the timing and the pitch licensing, so any songs that we put out, they’re going to have the right to pitch for the movie, television, advertisements, etc.

TP: Your new single, ‘frosty boy, ‘is already drawing attention to streaming services. Do you think this song is the start of a new sound for you guys? What can we expect for the clip?

Takach: It’s definitely the start of a new sound, that’s for sure. This song, I think in particular, is the epitome of everything we are trying to create together.

Long: [toward music video question] Seventies. We have our ‘Icy Boy’ here, Tim, playing your stereotypical kind of LA asshole, what do you call them? Influencer.

Greer: So it’s kind of a criticism of someone in LA claiming to be all of that, but actually they have insecurities like anyone else, trying to be successful in a big city. He follows the delusions and reality of one person, the Ice Boy, and that’s what I play. It’s gonna be a lot of fun.

TP: You released an EP in November. What were the main inspirations for the songs on it? Do they sound like your old music or do they have a new sound?

Long: It’s a lot of new sounds, but there’s like a lot of flavor to our old stuff. As the next single we’re releasing has similar flavors to our single with Tangina Stone, ‘Clean it up. ‘ It’s a bit more of the R&B genre. We still have that kind of pop foundation that we’ve kind of put in place so far, but we’ve just tried to inject more edge into it, you know, we want to add more distorted guitars.

Averbook: Stuff that will really translate into life – a lot to keep that in mind as we do this. We’re just trying to see what can get the crowd moving and stuff. I don’t know about you, Tim, but I do know that Derek, Jaron and I all had a big punk phase back then. When we were in ‘Waivada 2.0’ I remember hearing Derek doing punk stuff and I was like ‘This is crazy.’ I’m really glad we’ve kind of built that into the sound now, because I feel like there is a really good feeling when you play it.

TP: “Color fadedhas a lot of flow. This track gives listeners the impression of driving by the beach, transcending reality. Do you think this song deserves to be one of your biggest hits?

Long: I think we all have different favorite songs, but I think it’s pretty indisputable that ‘Faded From Color’ is just a universally enjoyable song. I think he has a deep pocket, he has very relevant songwriting. Any kind of creative person who tries to work nine-to-five and do their creative hobby will relate to that, and it’s just catchy, you know, like that chorus is really catchy.

TP: Macy, how long have you worked with them and what exactly are you doing to help them as a manager?

Gilbert: I’ve kind of started doing a lot of their marketing stuff recently. Since they’ve been working on all the EP-type stuff, right now we’re just working on social media calendars, ways to get their marketing stuff out. We are currently working on mailing lists to send to radio stations, blogs, giveaways and partnerships – whatever we can to try and get the word “Icy Boy” out. We’re also going to do that when the next single comes out and when the EP comes out. I’m also currently in music license, so I’m just trying to talk to the music supervisors and try to get them to get syncs.

TP: What advice do you have for young students who want to work in the music industry but feel so separated?

Takach: I think it definitely differs from the creative side to the business side. There are different approaches for the two, but if you want to talk about the creative side, I think it starts with just doing stuff, and I think that’s the core. To quote Roger Cooper, ‘Content is king.’ And you’ve heard this phrase many times, but there is so much truth to it, because when you create things over time, if you do it regularly, you will improve yourself, and eventually someone will start to value your. time you put into this, and then they’ll start paying for it.

Long: I would also say, even outside of creation, be creative. For example, take a look at what you might be missing out on in the music industry. Like I said, we didn’t even know this sync world existed until we came here. So as you talk to us or talk to other alumni who come here and work in different facets of the music industry, this is a great network for you or anyone else.

Averbook: I was also going to say networking, outside of creation, and just doing what you’re doing right now. Like even talking to us, it might spark ideas or just give you information you weren’t aware of or who knows, even better connections.

Takach: If you go back to how we first got this publishing deal, it’s because I met this guy named Lucas Spry at a bar one night, and he was a drummer and I was a drummer, then we started playing what was called drum sheds. Then, a few months later, he got a job at Universal, which led him to invite me to lunch with this other girl named Christina May. She’s the one who set up this ad deal and it’s kind of our bond there.

Gilbert: I mean the same for business too, it’s really all about networking. Every job I have ever got here was based on someone I knowâ€¦ In LA there is such a great network of OUs here – the people of OU are always ready to help. The people of OU will always go to bat for you no matter what, whether they know you or not, just because you are a Bobcat.