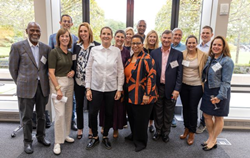 The Band of Sisters with their endorsers and former PepsiCo supporters

“We were honored to be welcomed home to celebrate the launch of You Should Smile More,” said Dawn Hudson, former president and CEO of Pepsi-Cola North America and founding member of The Band of Sisters. “It’s so gratifying to see the enthusiasm of the next generation of leaders at PepsiCo.

The Band of Sisters, six former PepsiCo executives, gathered at PepsiCo headquarters in Purchase, NY, on Wednesday, September 7 in front of associates and alumni to launch their new book, You Should Smile More – How to Dismantle Gender Bias in the Workplace. Over one hundred and fifty current associates and former colleagues attended the event where the Sisters shared remarks and copies of their book.

The group of sisters – Dawn Hudson, Angelique Bellmer Krembs, Katie Lacey, Lori Tauber Marcus, Co. Nicholson and Mitzi Short – met over two decades in various roles at PepsiCo between 1987 and 2016. The company is the place where they first bonded and began to learn, support and value ways to stand up for themselves and each other in their careers. Wednesday’s launch marks the official start of the Sisters’ inspiring and action-packed talks at companies across the country on how to recognize and effectively respond to microaggressions rooted in gender bias and create a workplace culture. more inclusive.

The rally was co-hosted by Anne Fink, Global President of PepsiCo Foodservice, and Tina Bigalke, Global Director of Diversity, Equity and Inclusion at PepsiCo.

“At PepsiCo, we know business thrives and people perform at their best when diversity and inclusion is a priority,” said Anne Fink. “We were thrilled to host The Band of Sisters for a conversation centered around creating an equitable future for all women in the workplace.”

Tina Bigalke adds, “PepsiCo continues to have open discussions about gender parity and inclusion, especially as we strive to make progress toward our pep+ goal of achieving gender parity in leadership roles. by 2025. We welcome these accomplished alumni to inspire our current and future generation of leaders and continue to push the boundaries of what is possible.

“We were honored to be welcomed into PepsiCo to celebrate the launch of our book, You Should Smile More – How to Dismantle Gender Bias in the Workplace,” said Dawn Hudson, former President and CEO of Pepsi-Cola. North America and founding member. of The Band of Sisters, “It was fun reconnecting with our former colleagues, and so gratifying to see the energy and enthusiasm of PepsiCo’s diverse and inclusive next generation of leaders. This evening was a perfect moment of circle in our careers.

Based on the latest research, personal testimonials and interviews with dozens of professionals, women and men, You Should Smile More shows witnesses, allies and supervisors at all levels of their careers how to dismantle everyday gender biases – a small thing at a time. time.

About the Sisters Band

The Band of Sisters is made up of Dawn Hudson, Angelique Bellmer Krembs, Katie Lacey, Lori Marcus, Cie Nicholson and Mitzi Short, six high profile women who have seen it all – from the bottom of the ladder to the boardroom. They have operating experience in over 20 industries, from large corporations to small startups, in many male-dominated sectors. They bring unparalleled insight into inclusive leadership and work culture.

More information can be found at https://thebandofsisters.com

Share the article on social networks or by e-mail:

Finding Community Inside and Outside Community College – The Bowdoin Orient