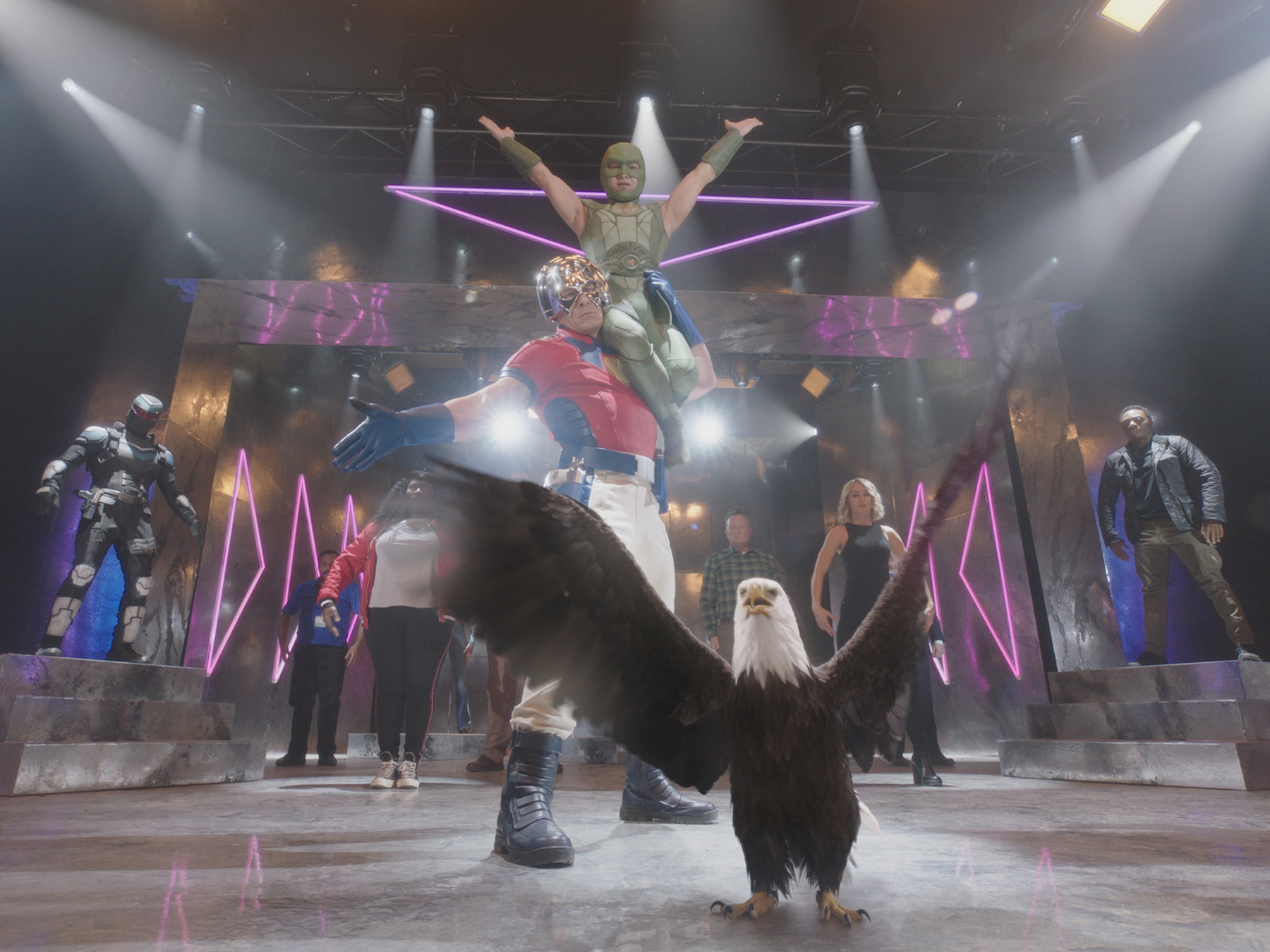 The streaming era of TV has also turned out to be the Skip Intro era, where binge-watchers are encouraged to skip the opening credits of their shows and jump right into the plot. And many shows from this era feature long and tedious credits for which this feature seems like a godsend. (The first major streaming drama, Card castle, had a coma-inducing credits sequence that almost single-handedly inspired Skip Intro.)

Then there are the intros you’ll never, ever want to skip, like the incredibly cheesy title sequence for HBO Max’s Peacemaker, in which John Cena and his friends start dancing to “Do Ya Wanna Taste It” by Norwegian glam metal band Wig Wam.

Like all the best TV intros, from The Rockford Files at The Sopranos at game of thrones, this musical number — which Peacemaker creator James Gunn came on the first day of writing his screenplay for this spin-off of The Suicide Squad – is hugely entertaining on its own, while setting the right mood for the show that follows it.

Gunn spoke yesterday with rolling stone on where the song is, the choreography, and why he hopes to defeat the “Skip Intro” button forever.

Where did the idea for this title sequence come from?
The absolute real truth is that I did exactly this thing in a movie called Great, only it was lively. We had no budget for that. I love having dance sequences and having fun with them and I wanted something at the start of this show that was going to be different and fun and convey that we were going to be a different type of superhero show, which we weren’t We didn’t have any rules in place, and that would say a lot about the creative approach and tone.

I have the credits paused on my monitor right now, and there’s still the Skip Intro button taunting me.
Part of my goal is to defeat the Skip Intro button. People work really hard on these things, and you want the audience to pay attention when their names come up. Getting viewers to do that for all eight episodes was worth doing what we did.

How many songs did you envision for it, and how did you end up with the song Wig Wam?
All the music is glam metal that exists in the world of Peacemaker – hair metal, sleaze rock, whatever you call it, or a mix of those genres. The Wig Wam song was just, to be quite honest, one of the first things I thought of. I started putting together a list of Peacemaker music long before I started writing the series. And Wig Wam’s song just seemed like the one with the perfect lyrics for our show: “Want a taste of it?” Do you really want to taste it? And so there was really nothing else in consideration but that song. This came to me, with the idea of ​​dance itself included in TV movies.

Where did the idea for the choreography come from?
I hired a great choreographer named Charissa-Lee Barton. who I think understood best what I was saying. I’m not a choreographer, but I showed him some of what I thought the dance moves were, and explained the basic essence of the scene, which is that it’s just this absolutely ridiculous, goofy, nonsensical dance, but combined with everyone being absolutely dead serious, and not even breaking a split second. Everything is completely serious on the one hand, and everything is completely goofy on the other. I think that’s a lot like the spirit of the show. It’s a serious show in some ways, and in others it’s completely bananas. So I explained this to Charissa, and then she did the heavy lifting. She made all the actors who came to rehearsals work very hard. A funny thing is that it was only after I hired her that I found out that she was married to my friend [Resident Alien star] Alan Tudyk, and when she sent me all the little dance move idea clips from her kitchen, they all featured Alan as the Peacemaker.

Every time I watch the intro, I start noticing different things. Like, when Jennifer Holland arrives as Harcourt, she moves around like a puppet. Were there certain thematic ideas you were looking for?
[Laughs.] I do not know. Maybe Charissa was. The absolute truth was that some people are better dancers than others. Jen was probably the best dancer of all, she’s a former gymnast and she was able to do everything very well. Other people were in between. Danielle [Brooks] was great. Annie Chang, who plays Detective Song, is a dynamite dancer. And then we had our Robert Patricks who is fun to watch in the background, but is definitely not a sing and dance man. It’s fun to focus on the different people doing the dance. Steve Agee said that he and Chuk [Chukwudi Iwuji] were the worst, but I thought they were pretty good. I think Steve was surprisingly good for such a big guy.

John Cena is an athlete, but not all athletes are good dancers. What help, if any, did he need?
He needed help. He wasn’t like Jen or Danielle or Elizabeth [Faith Ludlow]. It would take a few more tries than some people. But I thought John was a really good dancer, and I think we were lucky overall because everyone was able to dance pretty well, do the choreography, when I was afraid they can’t do it. And Charissa, to a certain extent, built it around the actors and what they would be capable of, giving some people more to do and some people less as we went along.

You have your main cast in there, but you also have guest stars who only appear once or twice during the season. Were some of these people in the dance just because they were in the first episode?
It’s kind of true, but there’s someone in there that doesn’t show up until episode five, and we shot it in the middle of the season schedule. We shot the whole thing in a high school auditorium for a day, and I remember it was painful. We called Rizwan [Manji, who plays hospital custodian Jamil in two episodes], and said, “Do you want to be in the dance?” He said yes, but it was during Covid in Canada, so he had to self-quarantine for two weeks on three occasions, and one of them was just for dancing.

Was there a particular visual inspiration for this black and neon scene?
It was mostly from Lisa Soper, our production designer. I originally said I wanted it to look like a 70s variety show, like with Sonny and Cher, but we tried that and for some reason it didn’t work, and we ended up leaned more into the 80s stuff. And I think that made more sense, because a lot of the Peacemaker personality comes from that decade, so the 80s music video, like the Kraftwerk one, fits a little better. Originally, we were supposed to do the whole dance sequence at Peacemaker’s headquarters, which is a big set throughout the season. But we started rehearsing it there, and it didn’t sound good; it looks too small. So I said, “I think we need to make a set for that.” I’m so glad we did.

You have a reputation at this point for coming up with soundtracks that match your characters’ personalities. Why glam metal for Peacemaker?
Sounds like that’s the kind of music Peacemaker would like. For a few years now, I’ve also had this personal obsession with what people call “hair metal” music. So that fits perfectly with the making of this show. Maybe that’s even part of the reason why I chose Peacemaker out of all the characters in The Suicide Squad. I was a punk rock kid growing up, so I had an appreciation for certain pop metal bands. I liked Mötley Crüe and some things. Hanoi Rocks, who are talked about a lot during the season, were a very important group for me. But I also ridiculed a lot of hair metal music. I think there are good songs in all genres of music if you look closely. And I became obsessed with finding really good hair metal bands and songs, and started this huge collection on my own on Spotfiy, and through that, I discovered all these great sleaze-rock bands modern people, who are mostly outside northern Europe, who make music today. And I think they’re a lot better in general than the average 80s hair metal band because they don’t take it too seriously. It’s a commitment to having fun. And part of the idea was to publicize some of these modern bands, like Wig Wam or Cruel Intentions.

Do you remember how you described the dance scene on that first day of writing the screenplay?
I said, “This is the greatest opening credits scene of all time” and “This is the weirdest dance you’ve ever seen and everyone in it is completely and 100% serious .”

Thanks for chatting, and I promise you I’ll never touch Skip Intro on this one, ever.
We’re just thinking about how we’re going to improve our game in season two.

The Boy Named If – Playing to his strengths

Chris Reed: How three ambitious documentaries seek to change our view of the past