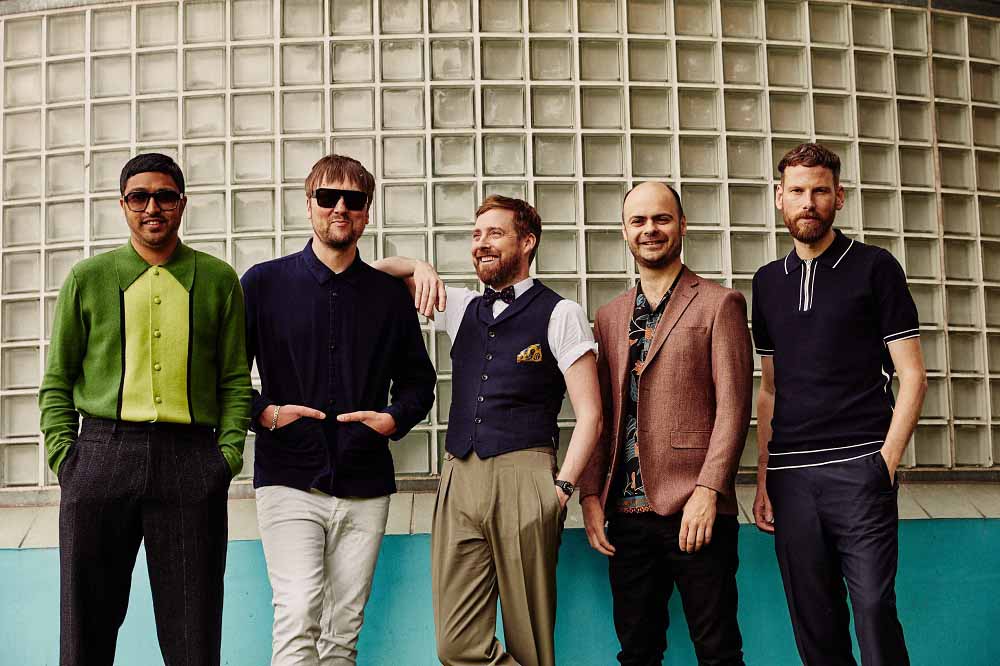 Oh my god i can’t believe it, the Kaiser Chiefs return to concerts with a return visit to the Scarborough Open Air Theater on Sunday August 8. We reported at the end of the year that they would play in the UK’s largest outdoor arena in July but, with restrictions still in place, the date was postponed.

“It’s been a long time since we’ve been able to go out and play in front of people,” Kaiser Chiefs bassist Simon Rix told me, heaving a huge sigh of relief. “These are the things that we normally do and take for granted, just to do a concert on a weekend, or whatever. I’m very happy that we can finally get out there and release all this pent-up tension on stage.

“We didn’t rehearse during the first lockdown, but since the last Lockdown 3 shutdown, we were able to walk into a room to write songs and rehearse. We have to do a little bit to be tight and make sure we’re all in good shape, to make the preseason! laughed the Leeds United fan.

The Scarborough date is a much anticipated comeback after a great night out there in 2017. “This concert was really good,” Simon recalls, “and we can’t wait to go back. The weather is so weird, now, because we released our last album in 2019, which seems years ago, but also feels like last week – because we haven’t done much since it was released. .

“We will also be in Halifax, the Piece Hall shows (September 11/12), a special event that we have never performed before, so that should be special as well.”

Yorkshire rock legends, with Rix alongside Ricky Wilson (vocals), Andrew ‘Whitey’ White (guitar), Nick ‘Peanut’ Baines (keyboards) and Nick Hodgson (drums), burst onto the scene in 2005 with the huge hymns of the festival I predict a riot and Oh my God from their first album Employment. The album initially reached number 3 on the UK charts, but after three 2006 Brits awards, including Best Group, the album peaked at number 2 a year after its release. Vijay Mistry replaced Hodgson on drums in 2012. Since 2005, the Kaiser Chiefs have, with just one break, worked continuously until the pandemic struck last year.

“It was in 2010 when we had some free time between albums for the last time,” says Simon. “We did festivals every summer, concerts in the winter and wrote an album in the spring. So even though people think we have free time, we work pretty hard. At the end of 2020, everyone was wondering “Have you written a new album? Have you been creative? ‘ The answer was a big “No!”

“In fact, because of Covid, we were forced to take a break from each other and be on the road and write songs. I think we all enjoyed being home and doing “normal” things, like gardening. So, it feels good to think about all you’ve accomplished, recharge your batteries, and find new inspiration. This year we started to put together some ideas, pretty slow progress but there should be some new music coming soon.

“I returned to Leeds in 2017 and the pandemic has been a great opportunity to reconnect with my community, to volunteer, to try to support local places and to work with local artists who are going through difficult times.

“If you look at us, we go back to where we left off, able to start playing gigs, but if the pandemic had happened in 2005, Kaiser Chiefs would have been really stuck. Without the Employment album, we would have been in a totally different situation.

“So I talked to local groups, trying to help them find a way through it all and it has been really good reconnecting with Leeds and the region. It’s good to give something back, but I also have a lot. I enjoyed volunteering and working with new artists.

“When the public is having a good time, it makes us feel good and play better”

One of the joys, for musicians, is when the audience returns in a live performance, something Simon says he missed. “Yes, we always say that concerts are a joint effort between us and the audience. When we play well the audience has a good time and because they are having a good time it makes us feel good and play better, a symbiotic relationship, you need both.

“We did a few things without a crowd and you don’t get the same kind of vibe so I can’t wait to be in front of those thousands of people because it makes such a difference in the way you play, how you you feel and all .. Hopefully we’ll take these steps on an interim basis with everyone being responsible, having a test before coming to the gig and not being a super-broadcaster.

The key to the music of the Kaiser Chiefs is those great Simon basslines that bring the music to life, but it was on the guitar that Simon learned to play Beatles songs.

“I really liked The Beatles and when I was 7 or 8 I learned all the Beatles songs on the guitar. McCartney was a bass player, so he was influential. And then, weirdly, I was in Cream with great bass lines.

I suggested that Cream was heavy enough for a young boy.

“Yeah,” he laughed. “My dad played me a lot of great guitar music, so I’m grateful to him. Later it was The Jam, punk and post-punk, The Clash and The Stranglers. A lot of people are learning the guitar, and nowadays the drums, but a lot of people ignore the bass. I had access to a bass, so I became the bassist. At first I was hoping that one day, maybe, I would take up guitar, but then I played guitar in a band and I didn’t like it too much. So I went back to bass and have been on it ever since. It’s just good to get things done and sometimes to have melodic lines in there. But it’s about having the right energy and I’m still pushing. Live I was pushing and pushing and pushing and hopefully that gives us energy.

On our first two albums, in particular, there was a great relationship where me, Peanut and Whitey filled in the gaps. Peanut would play low and I would go high or he would play the piano high, I would come with the low bit. Playing together for a long time, like me and Peanut, we’ve been a band since we were… 15 years old. All of this helps to create great energy.

Large groups also have a great relationship between bass and drums, the rhythm section is the heart of a group, something Simon has always enjoyed. “With Nick (Hodgson), we were in bands even before Peanut, we had our first band when we were 11, which wasn’t very good! Then, when I was in college, I was in a band with Vijay Mistry. So when Nick left Vijay seemed like the obvious choice to me, I already had a good relationship with him. He was in my old group and then we nipped him from another group in Leeds… everyone is friends again now!

The Kaiser Chiefs will perform at the Scarborough Open Air Theater on Sunday August 8. For more information on this show and all SOAT events, please visit scarboroughopenairtheatre.com

US Air Force Band of Flight to perform in Camden