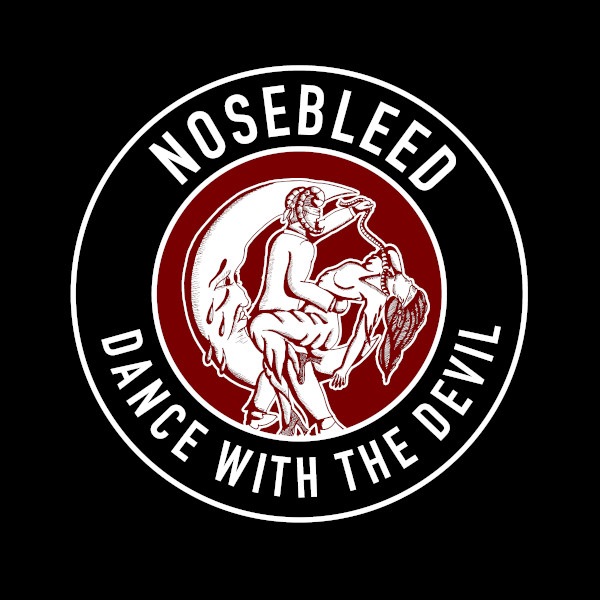 Nosebleed: Dance with the Devil

One of the best garage punk bands to have been vomited up by the UK DIY punk scene in recent years, Nosebleed deliver a glorious racket of rock and roll. They tend towards the choppy, staccato guitar flavor of the garage and, although half-paced for the most part, they can rack up a frantic head of steam. The guitar solos are short enough to add a boost without disrupting the flow, and fit right in with the garage and punk tradition. Think James Williamson meets Johnny Thunders with added reverb.

A few nice heavy floor toms provide the drive when the drummer isn’t hitting a slappy beat with his high hats and snare drums. They’re paired with bass played with the thundering intensity of Dee Dee Ramone and the odd sliver of gloriously dirty overdrive. In keeping with the garage vibe, the vocals are gravelly but they’re loud rather than shrill, with an odd rock’n’roll edge. 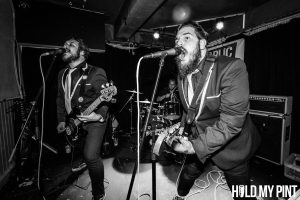 It’s tempting to say that Nosebleed’s DNA draws heavily from the very raw UK garage sound of Armitage Shanks, Thee Headcoats and the general production of Wild Billy Childish but, despite similarities in song structures, they don’t are not so lo-fi. Given their optimistic view of the garage, they are more like the New Bomb Turks.

The polished production of this album by Andy Hawkins at Nave Studio in Leeds pushes them towards high-output garage rock revivalists like The Hives at times. And surely every garage band has a touch of Sonics lurking in the background.

The fun video for the title track Dance With The Devil is a good showcase for Nosebleed at its best. High-octane rock ‘n’ roll meets garage with a chorus that could have been borrowed from The Ramones.

All this is very good but we must talk about the keyboards. They grew on me, but on first listen, they just weren’t enough for me. I could see what they were looking for and it created a New York Dolls vibe but had an ominous Chas’n’Dave touch to it. A few listens and I’ll concede it’s less Chas and Dave and more Jerry (Lee Lewis) and Jim (Jones Revue).

This album certainly has the standard garage punk vibe like previous Nosebleed releases. However, in places they have broken out into what may be a fairly limited genre. There are a few tracks that channel psychobilly sounds: Let It Go, with its twangy guitar, and Round and Round, which has a catchy chorus.

Under The Knife is very much Rawk with a capital R and shows that Eliot Verity can actually sing as well as rage. He further displays his vocal ability on All I Know, which really goes off-road. There’s more psychobilly twang, a touch of spaghetti western and the combination of vocals and guitar reminds me of The Damned as they explore their psychedelic roots. With its poppy chorus, it stands out from the rest of the album and could be an 80s radio hit. There’s no reason it can’t now.

Likewise, the closer album Make Up Your Mind is a slow number but something about the delivery made me think of 13th Floor Elevators.

Overall, Dance With The Devil is an enjoyable half-hour of rock and roll stripped down to love and relationship breakups with a few melodic interludes. Yes, it’s clichés but it’s rock’n’roll.

We have a small favor to ask of you. Subscribe to Louder Than War and help keep the flame of independent music burning. Click the button below to see the extras you get!