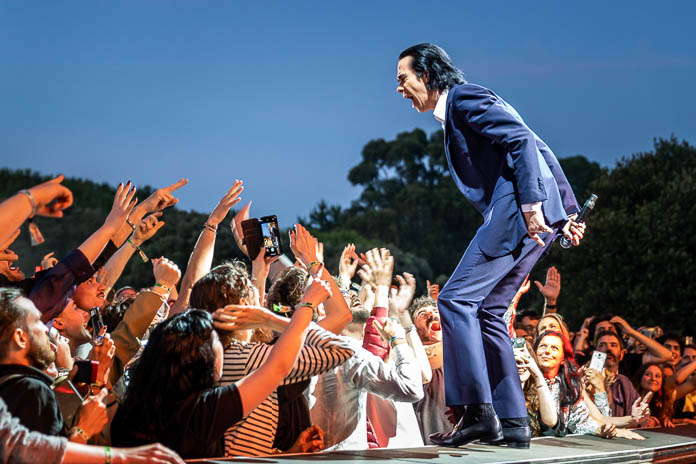 Having previously spent time at the base of Primavera Sound in Barcelona, ​​a branch of Primavera’s oldest side show in Porto, Portugal was a no-brainer for our coverage team. The line-up of decades-old infallible artists (the reunited Pavement, Dinosaur Jr., Slowdive) mixed with up-and-coming artists (Little Simz, Rina Sawayama, black midi, Dry Cleaning) was enough of an impetus for our team to jumps at the chance to cover their first festival since 2019 and have the opportunity to explore a country yet to be visited. In the end, our coverage team found Portugal so inviting that they opted to stay for an extra week of exploration.

Aside from one day being dropped off at the wrong end of the beautiful Parque du Cidade, which apparently rivaled the length of New York’s Central Park with dozens of pounds of camera gear, all went well for the three-day event. days. As mentioned in our preview article (and something other festivals should keep in mind), NOS Primavera Sound ran Thursday through Saturday nights, giving workers a day to recover from the ending. of the festival at 6 o’clock in the morning (!). Indie-oriented bands tended to end with end times around 2 a.m., leaving the early morning hours mostly to EDM artists and DJ sets.

Covering four outdoor stages and a few smaller indoor sets, there was always plenty to enjoy. Notably, Portuguese fans have been meticulous about staying on entire sets before moving on to the next one, likely in part because Porto aren’t likely to bring these bands to town on a regular basis – many artists have noted that it’s was their first performance in Portugal. . Three of the four exterior stages were side by side, allowing for quick transitions from act to act.

Our Day 1 coverage started with the UK band Penelope Islands. The five-track-lead brother and sister (Lily and Jack Wolter) seemed to be having the time of their lives and transitioned easily from shoegaze-y led tunes to simpler pop-oriented songs. One of the most refreshing sets of the three days came from a main stage staged by the Australians Stella Donnelly, which replaced at the last minute the much missed Japanese breakfast. Donnelly exuded as much charm as she did salty language and joked that while some of her songs tended to be gritty, she didn’t feel gritty at all that day. And as far as we know, Donnellly also performed the only handstand in the performance with a little help from one of his bandmates. Sky Ferreira The set was one of the most anticipated considering she hadn’t played a set in almost three years and it predated her Primavera Barcelona set by a few days. Unfortunately, between a few technical issues and perhaps a bit of pre-set jitters, Ferreira only had time for a six-song set, but previewed some new material. Following his set here, according to his social media posts, Ferreira seems to have hit his stride and is enjoying being back in the pop music spotlight.

Even though there was a lot of music afterwards, Nick Cave and the Bad Seeds actually got the top spot headlining the night with a full two-hour performance. Cave’s legendary live performance dynamics were on full display, as he marched on the first song to come face-to-face and arm-in-arm with his most ardent fans (our photographer was one of four “caught at the trap” on the right side of the podium, leading to some of our best shots from the festival). We caught two more acts after Cave’s set. One of the two most punishing sets we took over the course of three days came from noon black. The crowd at hand was whipped up by the band’s recorded introduction by a heavyweight title fight announcer and their precisely played, yet equally impactful game was a knockout winner. Closing night (for us at least) was the one we stayed for in full. by Caroline Polachek the vocals are truly otherworldly and knowing that her setlist ended with “Caroline Shut Up” and “So Hot Your Hurting My Feelings”, it was essential to stick around until the end.

Once the festival layout was set, Days 2 and 3 flowed seamlessly. We made a point of going to the festival site for the opening day 2, the Portuguese based Montanhas Azuis (Blue Mountains for the less literate). Playing as a five-piece band, with plenty of keyboards (!), Marco Franco led the way with a classic Casio sound. Although they weren’t wearing their patent blue rain jackets, there were plenty of flashy shirts on display. And their nostalgic offbeat calliope-based sounds reminded us of the Tenniscoats/Notwist Spirit Fest spin-off band in a good way. Then on the main stage, the American power-popsters beach bunny which charmed an early-day crowd. One of the many highlights of Day 2, Japan Rina Sawayama held court on the Cupra stage across the park. It was obvious from the first seconds of his set that Sawayama had dramatically upped his game to rival the biggest pop/dance stars of the day. Flanked by dancers for most of her set, expect big things as the calendar prepares for her second album due out this fall. Nighttime coverage began with two different performances. australia Coastal fever presented an ever more mature and tight sound from their early days while retaining a flair for a catchy melody. Attracting one of the most rowdy crowds at the festival, 100 Gecs couldn’t have been further from anything resembling a melody. Their mix of backing tracks, noise and non-stop strobe effects, over which the duo vocalizes something between rapping and the shouted word, was something to behold. The headliner of the day was the reconstituted Curb playing only their third set in over 10 years. Stephen Malkmus and his crew were in great shape, and having not seen them since their last album tour in 1999, Bob Nostanovich’s uninterrupted presence on stage quickly came to mind. Highlights from the set included incredibly loose “Grave Architecture,” Scott Kannenberg’s lead on “Date with IKEA,” and a fair ragged performance of the opening track “Two States.” Pavement’s performance on the main stage was preceded by sets with equally nostalgic turns from Slow dive and beck (which did not allow photos of this set).

The performances of the last day were fortunately honored by a third consecutive day of good weather. Late night sets from Interpol and Gorillaz were bypassed in favor of performances earlier in the day. First, as the pitch opened up, the day was Dry cleaning, who, along with several other NOS Primavera Sound artists, have a new album coming this year. The Florence Shaw fronted band delivered the goods with Shaw’s monotonous observations blanketing the band’s searing post-punk sound palette. Shaw showcased as much showmanship as anyone else on the bill while hardly ever moving a muscle, mostly with an eye roll and a shrug. She struggled not to break her cold, calm and detached demeanor given the enthusiastic response from the crowd. Based in Houston Khruangbin (who also didn’t allow photos) brought their heavy groove to a packed crowd on the Cupra stage, which turned out to host some of the festival’s most enthusiastic sets. retro act of the day, Dinosaur Jr., played a solid set on the main stage even though all the band gear was lost somewhere between here and Florence (seeing J. Mascis start the set on a borrowed Jazzmaster was a bit telling that something was wrong) . Bassist and Sebadoh founder Lou Barlow played the role of passionate MC while Mascis shunned audience banter in exchange for a loose, musically emotive set that evoked Neil Young’s Crazy Horse at its highest. The last set we caught before heading out of the festival a bit earlier than previous nights was London Little Simz. She recognizes his name, with his childhood nickname, Simbi, on the lights throughout the set. His stature is supplanted by a huge stage presence and close connection to the crowd. There is no doubt that everyone present was won over or followed Simz’s every move and command. Her breakdown of her routine for the day leading up to her set was as uplifting as it was comforting – describing a hotel massage session that was necessary for her to give her fans her best.

If you’re looking for a more laid-back alternative to the main Primavera event in Barcelona, ​​but want a carefully curated line-up of artists, NOS Primavera Sound may be a good bet for you. The festival runs as smoothly and as on time as anything we’ve seen with seamless stage changes with fairly elaborate requests. Porto is a beautiful city steeped in history with plenty to offer for an extended stay before or after the festival. Pavement and Dinosaur Jr. were both spotted at our hotel and were on hand before and after the festival enjoying what the city has to offer. Our hotel’s indie rock elite gave way to a high-end car rally crowd that had more than a few similarities. A great and welcoming time was certainly had with top performances by the newest and most established artists. Primavera is also hosting events in Los Angeles, Brazil, Chile and Argentina later in the year.

Support under the radar on Patreon.