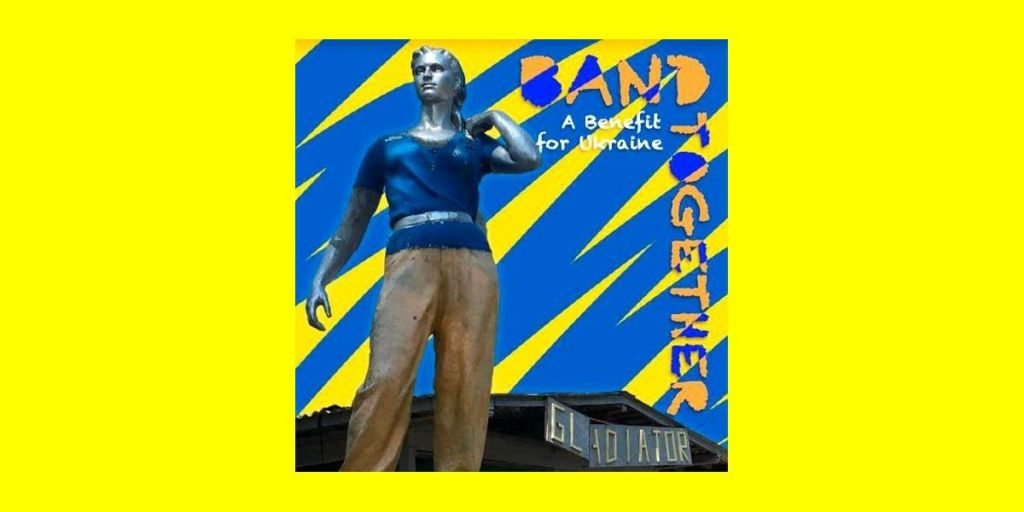 ASTON — For Janis Chakars, professor of communications at Neumann University and famous punk rocker, the Russian invasion of Ukraine was devastating.

As a founding member of punk rock band Citizens Arrest, Chakars used his talents as a music organizer to create a compilation music album, “Band Together, a Benefit for Ukraine”, which features seven Ukrainian bands to channel the aid to Ukraine.

“It’s important that Ukrainian voices are heard at this time,” Chakars said. “I think it’s important for Americans to show solidarity with Ukrainians right now during this terrible time.”

Chakars has an Eastern European connection with his family in Latvia and after visiting Kyiv and, like many people, is outraged at the sight of people being murdered and the country being bombed.

“The war started and I thought about what I could do,” Chakars said. “As guys from Neumann, our whole project is based on Catholic social teaching and Franciscan values, and a basic teaching is solidarity with the oppressed, and there is hardly anyone more oppressed than Ukrainians right now.”

He had done charity albums for Black Lives Matter in the past and also had experience producing a commercial album with his band.

Four days into the war, he called his drumming partner Derik Moore who handled the website logistics, and then he started calling.

Chakars asked Ted Leo to write an original song for the album. Leo plays in a band called Te Both, with Aimee Mann, of ‘Til Tuesday, who had the top 10 hit “Voices Carry” in 1985.

Most importantly, Chakars managed to get seven Ukrainian bands on the compilation album.

Chakars said the performers are all related to punk or post-punk, but not all songs are punk music. Some are folk songs and he said one is even danceable. He is amazed at the effort they are making to be on the album.

“I’m reaching out after the war starts and they’re under duress,” Chakars said during a show on college radio station, 98.5 WNUW, where he played some of the songs. “They make me listen to music while the bombs are falling. I was touched and amazed by their resilience and strength.

Chakars said that the Death Pill group saw their band separated by war. One artist is a refugee in Poland while another is stuck in kyiv being bombed.

“Another sent me the song as she was fleeing the capital,” Chakars said. “I couldn’t believe she said, ‘Sorry, it’s taken so long, I’m running away for safety. “”

Chakars said while talking to the musicians that he asks if they are safe, but realizes what that means now?

“There’s no ‘being safe’, it’s being alive, but I can’t write are you alive, that doesn’t seem appropriate,” he said.

Chakars said a member of the Sasha Boole group had joined the army and others were scattered across the country.

Chakars said talking with Ukrainian artists made him feel guilty about America’s security, but he thought it was a way to show solidarity with the oppressed.

The album is available for $10 on the music site band camphttps://bandtogether.bandcamp.com/releases.

All of the money from the album goes to Razom, a Ukrainian-American 501c3 who has previously delivered medical supplies to people in Ukraine.

Chakars said the name Razom translates to together in Ukrainian. The organization was founded in 2014 to help after the war in the east and has intensified since the start of this latest war with Russia.

“In the first week they shipped 40 tons of supplies, including what they called tactical medicine,” Chakars said. “They have a fleet of drones that they can spot on the safest roads, so they get their supplies to really dangerous places like Kharkov.”

The album is hosted on a platform called bandcamp which Chakars says is an effective way to raise funds.

They have already raised $1,000 and he hopes to contribute greatly. They will also create a tape which he says is trending with kids these days.

The album cover is a photo he took in 2019 during a visit to Kyiv. He said there were signs of the 2014 war in the East, souvenir stalls.

In a park, they saw a Soviet-era statue painted in the blue and yellow colors of the Ukrainian flag with a ramshackle cafe behind it that read “Gladiator.” His son, Vilnis, a graphic designer made the cover of the album.