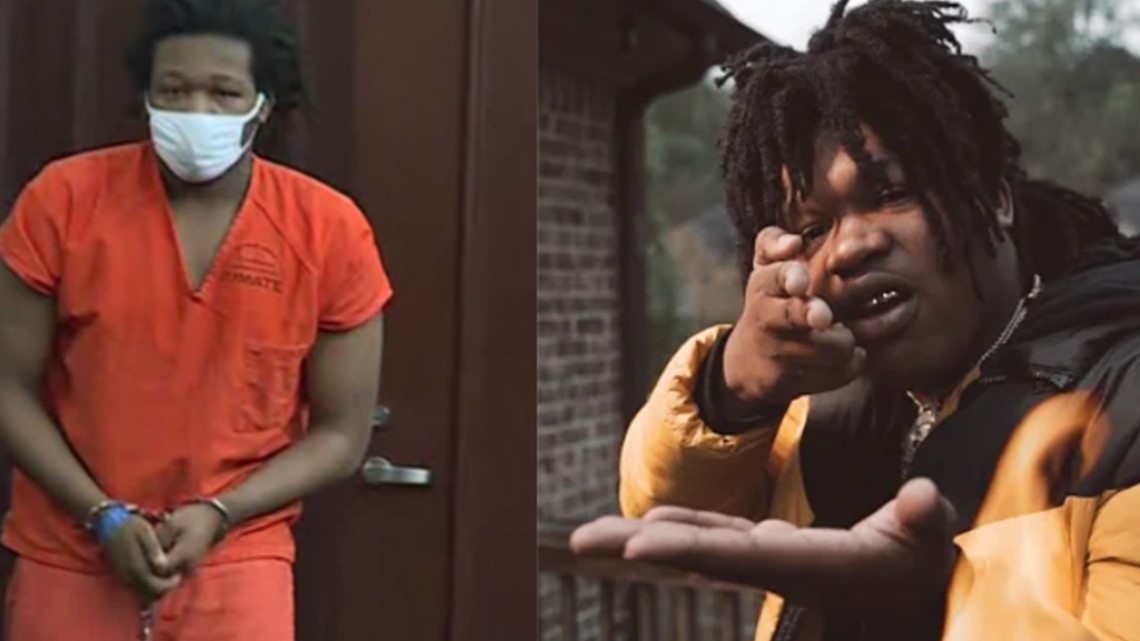 JACKSONVILLE, Fla. — The founder of a New York-based record label told a Duval County judge Friday that he wanted to post bail for a Jacksonville rapper accused of killing two people.

The executive told Circuit Court Judge Tatiana Salvador that he had known Robinson for about three or four years and signed him to his record label two years ago for about $50,000.

“I knew him before I signed him. I have to know him and I’ve taken a liking to his work ethic,” Shipes said. He also told the judge that he thought Robinson was of “good character” and that he did not believe he had committed the crimes he was charged with.

Shipes said he was willing to pay $25,000 to have the rapper released. “If I could put in more money, I would,” he told the judge.

Having entertainers in jail for various crimes is nothing new for Shipes, but he said he has never testified in any of their cases like he does for Robinson.

“Unfortunately, there are other artists who have signed me who are…locked up and incarcerated, but I’m not going to court and talking about it,” Shipes said. In many of these cases, Shipes said there is evidence to suggest the artist might be guilty.

“Knowing this case and Hakeem as well as I do, I’m really passionate about it,” Shipes said. “I think based on the evidence, it really shows he’s innocent.

“I’m trying to do everything I can to get him out and get him back on track… he was becoming a music superstar when all of this happened and he lost all of his momentum. I really care about him and I want to see him back on his feet again,” Shipes said.

Robinson’s attorneys argue that his $4 million bail is unfair and is tantamount to having no bail at all. Robinson has been in the Duval County Jail since September 2020 after being arrested and charged with the Jan. 15, 2020 shooting death of 23-year-old Charles McCormick, an up-and-coming rapper known as Lilbuck.

While in jail on that charge, Robinson was charged with the February 25, 2019 shooting death of Adrian Gainer Jr., aka Bibby, at the Hilltop Village Apartments.

Police said both shootings were gang-related.

Prosecutors objected to Robinson’s bail reduction, saying his criminal history made him a risk to the community. The state cited several of Robinson’s previous cases dating back to when he was a minor. Some of the cases happened when he was 12 and 13 years old.

In his music and on social media, Robinson has mocked the victims he is accused of killing and other rivals, or ops, killed in the Jacksonville shootings.

During his cross-examination of Shipes, State’s Attorney Joel Cooper questioned the record company executive about the violent nature of Robinson’s music.

Tara Kawass, one of Robinson’s attorneys, objected to Cooper asking Shipes what his client’s music was.

“He testified that he defends Mr. Robinson based on his belief that he is of good character,” Cooper explained, “…and that his music is something they intend to put back there to generate funds not just for Mr. Robinson, but his company.

The judge left the matter open.

“You can talk about his music, but it’s entertainment,” Shipes said. “Hakeem is a poet so he paints pictures of things he’s seen in his life or in his neighborhood. That’s part of the beauty of what hip hop is. It’s cultural music and it has definitely a violent undertone, but that doesn’t mean he does those things.”

As part of the bond reduction hearing, Robinson testified about his current financial situation stating that he had no income or money.

Judge Salvador said she will decide in the coming weeks whether his bail will be reduced.

LOOK: Jacksonville rapper Ksoo testifies at bail hearing telling judge he has no income or money