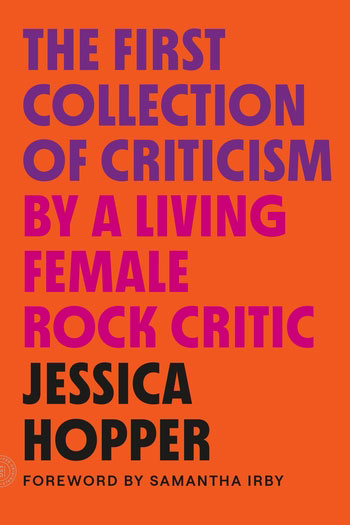 The staff are not the critic. All criticism is personal, of course, and comes from values â€‹â€‹and ideas that are meaningful to us, but there should be a line that demarcates where personal feelings and critical thinking fall. A good review is about making clear your own sensitivities, our instinctive emotional reactions, so that the reviewer – and his audience – do not confuse animosity and analysis. Liking something doesn’t mean it’s good, they’re two different things, and a good reviewer may not like something (Italian handles it well by saying “I don’t like it”) while stressing that it is well done and works on its own terms.

This balance is not difficult to maintain as long as one starts from a point of self-awareness and is transparent to the reader, but the kind of passions that music ignites go against these habits. Jessica Hopper misses that balance often enough in this collection that there is a sense of two steps forward and a rollback when reading. But that just means that there are things to discuss with this book, which is worth reading.

This new edition carries substantial weight compared to the 2015 original, published by Featherproof Books. With just over 200 pages, this updated tome contains over 400 pages of Hopper’s essays, reviews, profiles, and interviews, along with a complete new afterword from the author. Notable additions include an angry and wise article for MTV News, published in the aftermath of the 2016 election, which was a brilliant antidote to Amanda Palmer’s privileged flippancy; an interview with Lido Pimienta, first published in The believer; a Vanity Fair article about the group of women who transformed Rolling stone on the editorial side in the mid-1970s; and for It, an article titled “How the Women of Nashville Combat Brother-in-Country Rule”. These last two come from a subsection of the book called “She Said” and highlight Hopper’s status as being close enough to “First … Living Female Rock Critic” that the title can be both ironic and affirmative, both in a positive sense.

The title is also a key part of critical transparency. Hopper has worked for two decades in a field that, until recently, was predominantly exclusively male. Emphasize this to the reader, emphasize what it means, walks through this collection and is, over and over again, important. This means not only explaining how vital punk rock was to teenage Hopper, helping her find her own tastes and values â€‹â€‹away from the influence of male crushes – and punk rock helped her both to get into these crushes and get past them – but also to show how to have wives the editors did Rolling stone a better magazine, and how to fight the â€œBrother’s Ruleâ€ makes for better music.

She writes more insight than anyone on Miley Cyrus, and she describes Lana Del Rey in one song and comments on her album. Honeymoon in another, and here’s a place where Hopper’s perspective unbalances her slightly. The profile is excellent, Hopper has an insightful eye for how pop culture sees Del Rey and how Del Rey is shaping himself to exploit that – Hopper watches the men watching – and, musically, the reviewer is all in it. the singer’s corner. But explaining Del Rey’s calculation, without judgment, is not the same as hearing the same calculation in his music, which is often intentionally cynical. It’s part of the package, Del Rey challenges people to call her out on what she does, and that provocation has a thrill, but the cynicism remains the cynicism.

To interpolate an old phrase about sports, fans hear with their hearts. Hopper is a critic who, like all of us, is originally a fan, and that line is often blurred and, in the space of this book, contradictory – not in the way that happens to all of us, having an opinion on one thing and then change your mind, but in terms of values. She casts on the 2007 deluxe reissue of Sonic Youth Dream nation, denouncing the group’s commercial exploitation of their earlier material and the general transformation of early punk and post-punk into nostalgic capitalism. But she offers a sympathetic understanding and implicit endorsement to independent musicians trying to make money (and often get out of poverty) by selling songs or creating original songs for commercials. She kicks off a publicity manager, who explains that “These big companies are the last people to pay musicians what they’re worth.” And after admitting her admiration for a band counting their money on t-shirt sales on the Vans Warped Tour, it looks like she might also blame Sonic Youth for making money selling their albums to fans. , new and old.

It could be just that reader’s fandom responding to that of the writer, of course. And as a guide on how to look at rock and pop from the perspective of half (at least) the country, Hopper is sincere and true.

10 best albums of the year so far, from Olivia Rodrigo to David Balfe