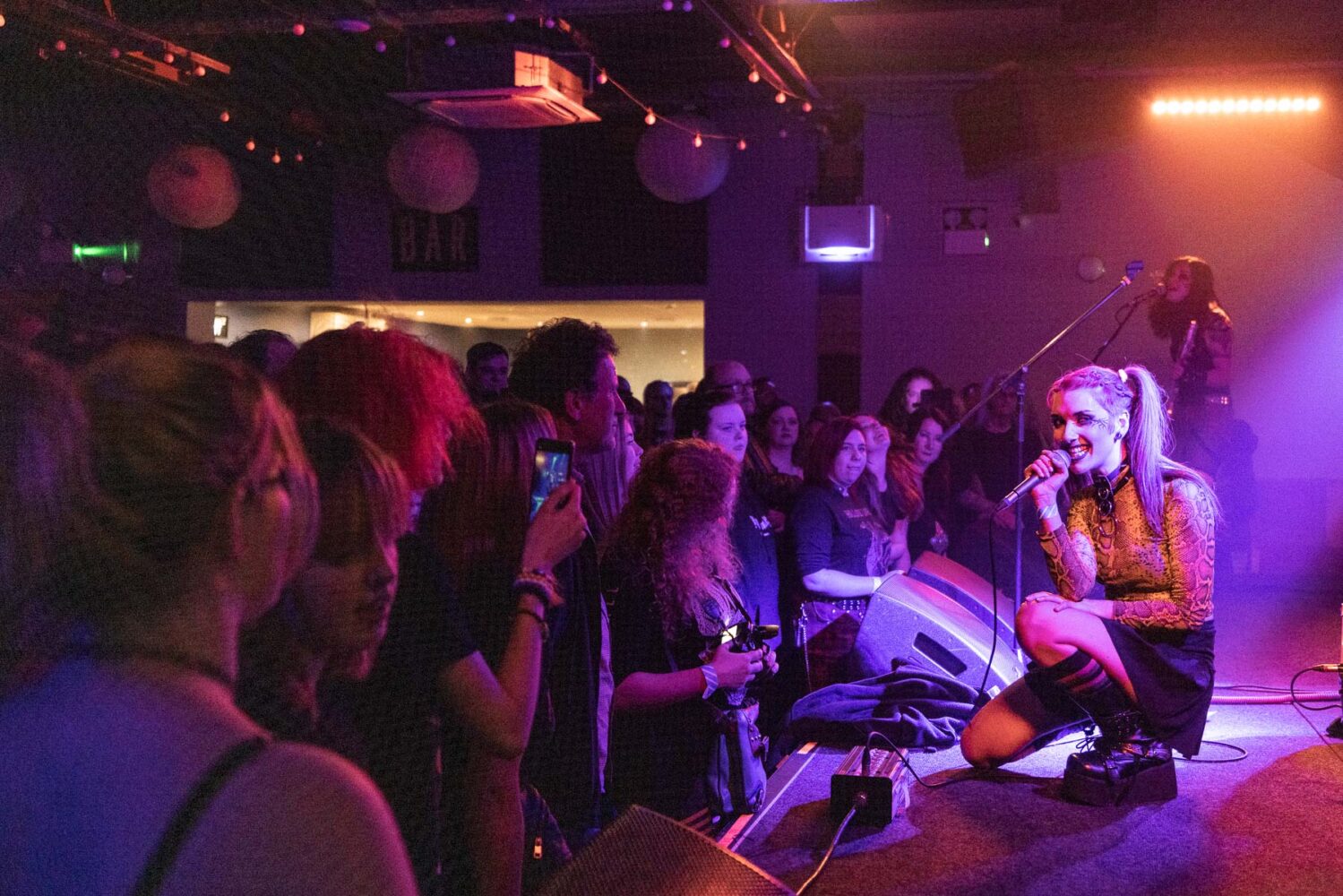 Hands Off Gretel returns to the iconic Brudenell Social Club with a passionate and heartbreaking punk rock ‘n’ roll ensemble. Andy Brown shares his thoughts on Louder Than War.

In March 2020, I was in that same venue watching Hands Off Gretel tear up the stage with a furiously fun punk rock set. I wasn’t supposed to know it at the time, but this would be one of the last concerts I would go to for about 16 long COVID-laden months. Of course, a small pandemic wasn’t about to slow down singer, guitarist, songwriter, and rock ‘n’ roll queen Lauren Tate. With the band on some sort of forced hiatus, Tate decided to release an album from his rap-rock solo project, Delilah Bon. Now the restrictions have been lifted and Gretel has emerged from hibernation to join Delilah; their eyes firmly fixed on world domination.

Scarlet kicked off last year, so it’s fitting that they’ll be back at the Brudenell tonight. The Manchester-based quartet sound even louder than before, as they deliver an ensemble full of grunge-inspired energy, melody and soaring rock. Post-punk basslines vibrate under a wall of melodic guitars and Jessie Robinson’s passionate and perfect vocals. Wrong Way captures the band’s talent for combining big rock guitars with incredibly catchy and pop hooks. Looks like they’re having an outright riot too; with Robinson and lead guitarist Adam dropping to their knees worshiping at the altar of live rock ‘n’ roll.

“For a long time we said that we were from Leeds for the people of the South” explains As the sirens fall singer Mikey Lord, “but shit, we’re from Keighley”. It’s one of the many moments in their set that is greeted with cheers of worship. I admit that the band’s brand of emo-style angst doesn’t really concern me at first. However, despite my first reservations, impossible not to be conquered. Dressed in what must be an uncomfortably warm striped sweater; Lord leaps energetically onto the stage and this unwavering enthusiasm proves to be highly contagious. They bring the whole room together; make us jump in unison and sing at the top of our lungs.

Don’t touch Gretel let yourself be torn apart with the fierce In The Eyes, channeling the raw power of the Stooges. It’s been a while, but it’s clear the band is well and truly back in business. Milk then comes with a colossal wall of heavy, temperamental, grunge-inspired guitars. The lyrics approach animal cruelty and veganism with unprecedented passion as Lauren Tate’s distinctive and heartbreaking scream tears the room apart. It’s a very clear reminder that beyond great riffs and energy, Hands Off Gretel is a band that has something to say. And isn’t that exactly what punk is?

Crouching in front of the stage, Tate delivers the songs to the outstretched hands and wide-eyed front row. Hands Off Gretel is all about making that connection and spreading some punk rock spirit. This is a group that has built its reputation one concert at a time; propelled by their passion (very clear) and the fervent support of their fans. The mother of all mission statements, I Want The World perfectly captures the enduring spirit of the group. The eternal outsiders, poised and ready to pounce at any time. Their energy spills over from the stage and penetrates the hearts and minds of the ever-attentive audience.

Tate tells us that she wasn’t sure how popular the group was in Leeds. Still, as tequila shots and cheers of approval swing onto the scene, the pure love for South Yorkshire’s best is absolutely clear. It’s My Fault and the excellent Freaks Like Us feel like they’ve come from a very personal place while connecting with audiences like a handwritten letter from an old friend. The latter absolutely tears my heart out. The general feeling tonight is one of catharsis and pleasure. You know things are going well when you mention that you go to see Dirty Dancing in the morning is greeted with a round of applause. Guitarist Sean Bon is suitably baffled and amused. No one is putting Hands Off Gretel around.

The group is so incredibly well established that the whole does not dive or lose its momentum. Badass bassist Becky Baldwin and skillful drummer Sam Hobbins set the rhythms while Tate and Bon bring in the raspy riffs. SASS shakes and sway while She Thinks She’s She Thinks She’s Punk Rock N Roll is a reborn grrrl riot (not that he’s gone anywhere). They are songs driven by empowerment, feminism and the desire for change.

Before the band unveil a new song called War, Tate explains how he was repelled by a big cheese in the industry. Said great kahuna told Tate that he does not listen to the lyrics and that his songs have no hooks. Of course, that kind of rampant idiocy is just food for Tate’s fire. Musically, the track mixes explosive punk with unexpected jazz-esque influences while the lyrics call the time on a deep-rooted toxic masculinity. “She said don’t you believe me! ??” Tate shouts as the song cuts through the crowd. Tate goes on to say that while it would be great to see more women in festival lineups, people actually had to start. listen to them too. All of that and we even get a ridiculously exciting cover of Nirvana’s Territorial Pissings and two callbacks. Don’t Touch Gretel doesn’t need to take over the world, it’s already theirs.

All the words of Andy Brown. You can visit his author profile and read more of his reviews for Louder Than War here.