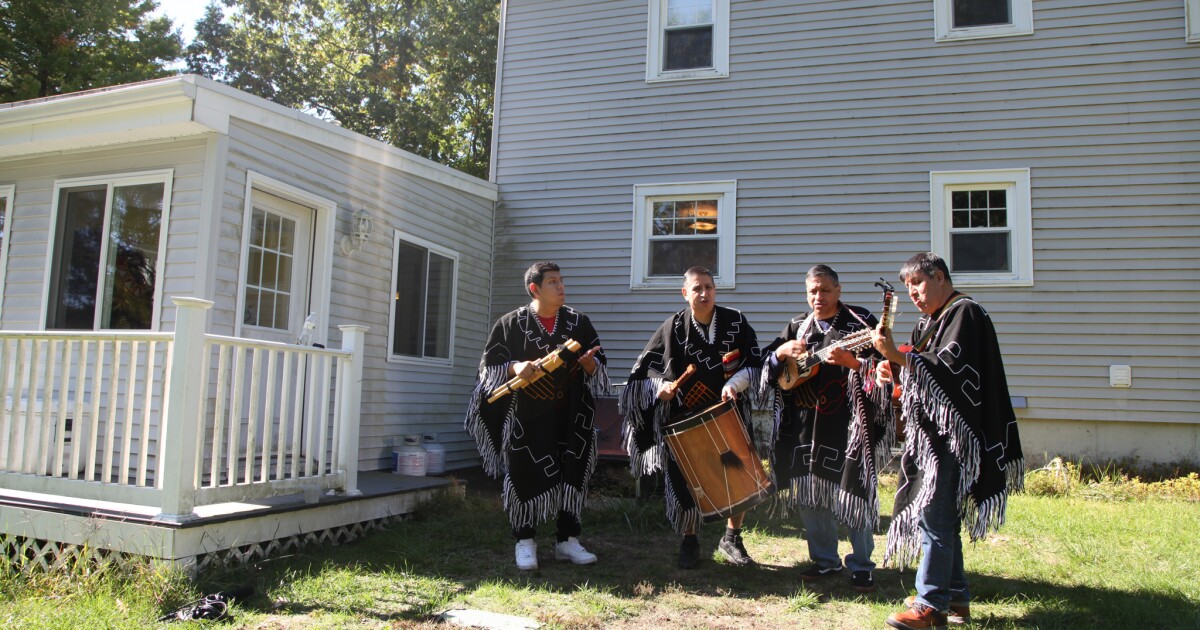 José Lopez Carrasco has 130 chickens in his garden in Litchfield. He started with four but decided to expand the co-op to honor his grandparents, who taught him how to raise them in Cochabamba, Bolivia. It was part of their lessons about Mother Nature and how her ancestors honored her.

Chickens are a way for Lopez Carrasco to maintain ties with his homeland. Music is another, and it’s a family affair.

The day I visit him, he, his two brothers and his niece are playing a folk song about Achacachi, a town near the Bolivian capital, La Paz. It’s a happy song that highlights the charangoa small stringed instrument traditionally made with the shell of an armadillo’s back.

Learn more about how ¿Qué Hay from Nuevo, New Hampshire? reports for Latino communities in New Hampshire this Hispanic Heritage Month and throughout the year.

They named the group Manases. Its eight members sing lyrics about traditions and their great love for Mother Nature, an essential component of the indigenous Bolivian cosmovision.

Lopez Carrasco came to New Hampshire 40 years ago after marrying his wife; the couple met while on a Mormon mission. It took him 17 years to bring his parents, five brothers and one sister to the United States. All were born in the silver mines of Oruro, but their father took them out of this difficult life when they were children.

“We are grateful that they did not continue the life of slavery they went through,” he says.

Since arriving, the family has put down roots in southern New Hampshire. Most of them work in the medical field, which takes up most of their time. But every Sunday, the now 60 members of the family come together to celebrate their passion: Andean music.

“I think we are all the Bolivian community,” jokes Lopez Carrasco.

After all, in all these years that he has lived here, he has not met other Bolivians who are not part of his family; he says he is constantly looking for more.

The first time the band played, back when they didn’t even have a name and the youngest was only 11, they had a lucky streak. They were supposed to be the opening act for a big Bolivian band called Los Kjarkas, famous all over Latin America. But the band didn’t show up and the brothers ended up giving the whole gig. They rocked – the audience was euphoric and they wanted more.

Jorge Lopez Carrasco, who taught himself to play the charangoremembers the adrenaline rush of that moment.

“It was so competitive, but we were playing on a big stage,” he says, “even though it was pure luck.”

Their first gig in New Hampshire was at the New Hampshire Technical Institute. They usually play at multicultural festivals in the summer.

Julian Lopez Carrasco, who plays the panpipes, says raising children in the United States has been difficult. He thinks Hispanic kids lose a lot of their culture in school.

“When my daughter was 8, she asked me, confused, if she was born only American and not Hispanic,” he recalled, “even after I constantly taught her about her culture.”

This confusion also happened to his nephew, Deniss Lopez Carrasco, who arrived in New Hampshire when he was 2 years old. He was constantly teased for being Hispanic in elementary, middle and high school.

“Those were difficult times when I was forming my personality,” he says.

But with the support of his family, he learned that there is something to be proud of. He married a Brazilian and has a baby on the way. His cousins ​​married people from the Philippines, Guatemala and Russia. The family is growing and the Lopez Carrascos are excited to expand their roots.

Denis hopes that all these new babies will one day learn to play an instrument.

“I now embrace my Hispanic culture,” he says, “it makes me who I am, and I’m happy to be that.”

How much money the group earns