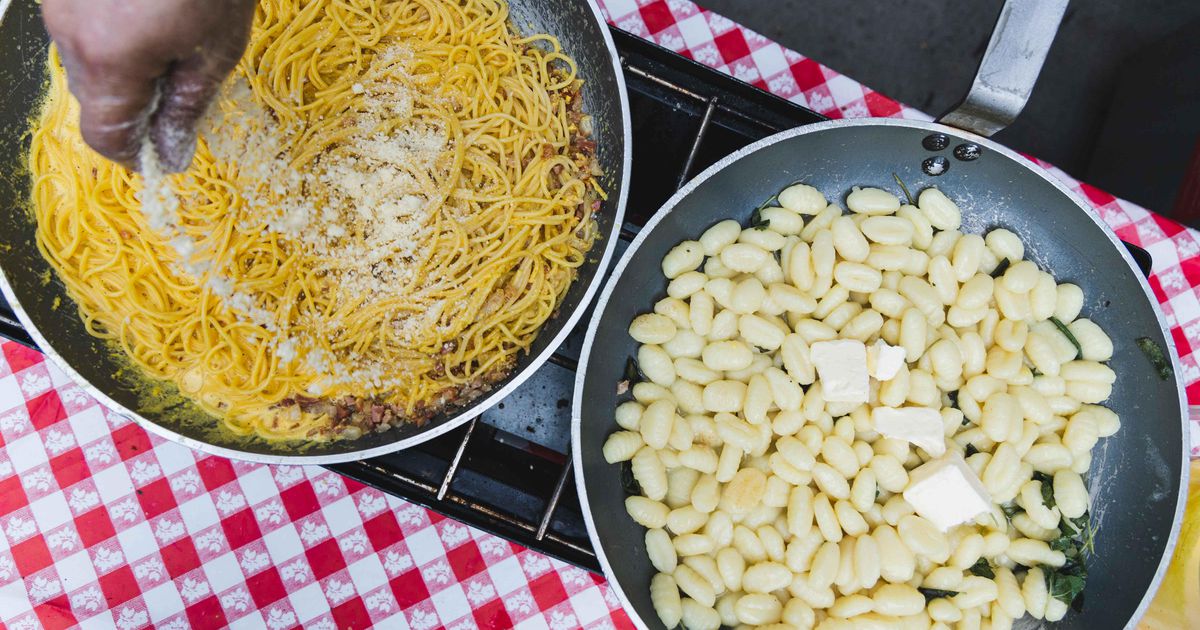 What does an old-fashioned Italian festival look like in a 21st century mall?

“Gateway obviously has a more modern feel, but we’re trying to recreate that street fair feel,” said Nick Fuoco, one of the organizers of Festa Italiana, which takes place on Saturday and Sunday September 17 and 18 at The Gateway to downtown Salt Lake City.

“The stalls are all huddled together and you have a lot of people walking around,” Fuoco said. “You will hear a lot of Italian. You will hear street music throughout the festival. We have street artists, like in any big city, or in Italy. So there is an atmosphere that we are trying to create there. So if people just want to come and buy something to eat, or sit down and listen to music, we just want people to come down, make it available, and let everyone enjoy the culture.

Festa Italiana is the work of the Italian-American Civic League, founded in 1934, to support immigrants settling in Utah to work on the railroad, in the mines and on the farms.

Fuoco, treasurer of the IACL men’s chapter, said the league is one of Utah’s oldest nonprofit groups. “We started offering Italian immigrants, as they came to Salt Lake City and Utah, the opportunity to assimilate into the culture and bring our culture to Utah,” Fuoco said. . “There was a group of us who felt like Salt Lake City deserved and needed an Italian festival, like the ones you see across the country.”

The volunteer-run festival – which is free to the public – is an opportunity to showcase food, music, culture and Italy. “There was no better way for us to tell our story and our story,” Fuoco said.

The festival kicks off on Saturday morning with a vintage bike ride at 10:30 a.m. – a fairly new feature for the festival, said Diana Rossi, president of the league’s women’s chapter.

“It was really fun last year,” Rossi said. “It’s not necessarily a race, it’s just for fun. It’s a traditional vintage bike ride. Lots of people dress up and have vintage bikes. It’s an easy ride, so it’s fun for all ages. We hope it will grow this year.

Chefs, including Mark Sciortino of Marco’s Italian Restaurant in Buffalo, NY, will lead demonstrations at the cooking stage. And for those of legal age, you can purchase a wristband to try bottles imported directly from Italy, including select wine pairings from Utah’s own Caputo’s Market & Deli.

Fuoco said music is a big part of the festival, with performers from across the country and around the world. Returning this year is Luca De Paolis, who is traveling from Civitavecchia, Italy, just outside of Rome.

“He’s a super talented accordionist and singer and he plays a lot of modern and traditional Italian songs,” Fuoco said. “He kind of became a fan favorite and really became friends with so many festival patrons. ‘Italy.

(Italian American Civic League of Utah) The annual pizza eating contest at Festa Italiana 2021. The 2022 edition will be held September 17-18, 2022 at The Gateway in downtown Salt Lake City.

Pesaturo, Fuoco said, holds the Guinness Book of World Records for playing the accordion for the longest period of time, and Mbrascatu plays modern folk-rock.

“Anthony Nino Lane is also a fan favorite,” Fuoco said. “He’s been with us almost since day one; he started coming in 2016, and we have become incredibly good friends with him and his band, which is a great group of six.

For those who prefer to combine food and extreme food variety entertainment, Saturday features a pizza-eating contest (and if you want to compete, registration is available on the festival website, festaitalianaslc.com).

Although most people automatically associate food and accordion music with Italian culture, a less expected part of Festa Italiana is the car show, a collaboration with the Ferrari Club of Utah, which will bring some unusual cars and vintage.

“So we’ll have a super cool element where you come and see Italian supercars,” Fuoco said. “We will have around ten or twelve different Ferraris throughout the festival, and other luxury Italian cars for people to experience. It’s a cool way of telling you an element of culture as well as motorcycles – these big brands also drop a bunch of bikes. So it’s kind of a cool little way to showcase that aspect of Italian culture too.

(Italian American Civic League of Utah) An abundance of Italian fare is expected at the 2022 edition of Festa Italiana, September 17-18, 2022, at The Gateway in downtown Salt Lake City.

A country and heroic exit show on screen – Tone Madison