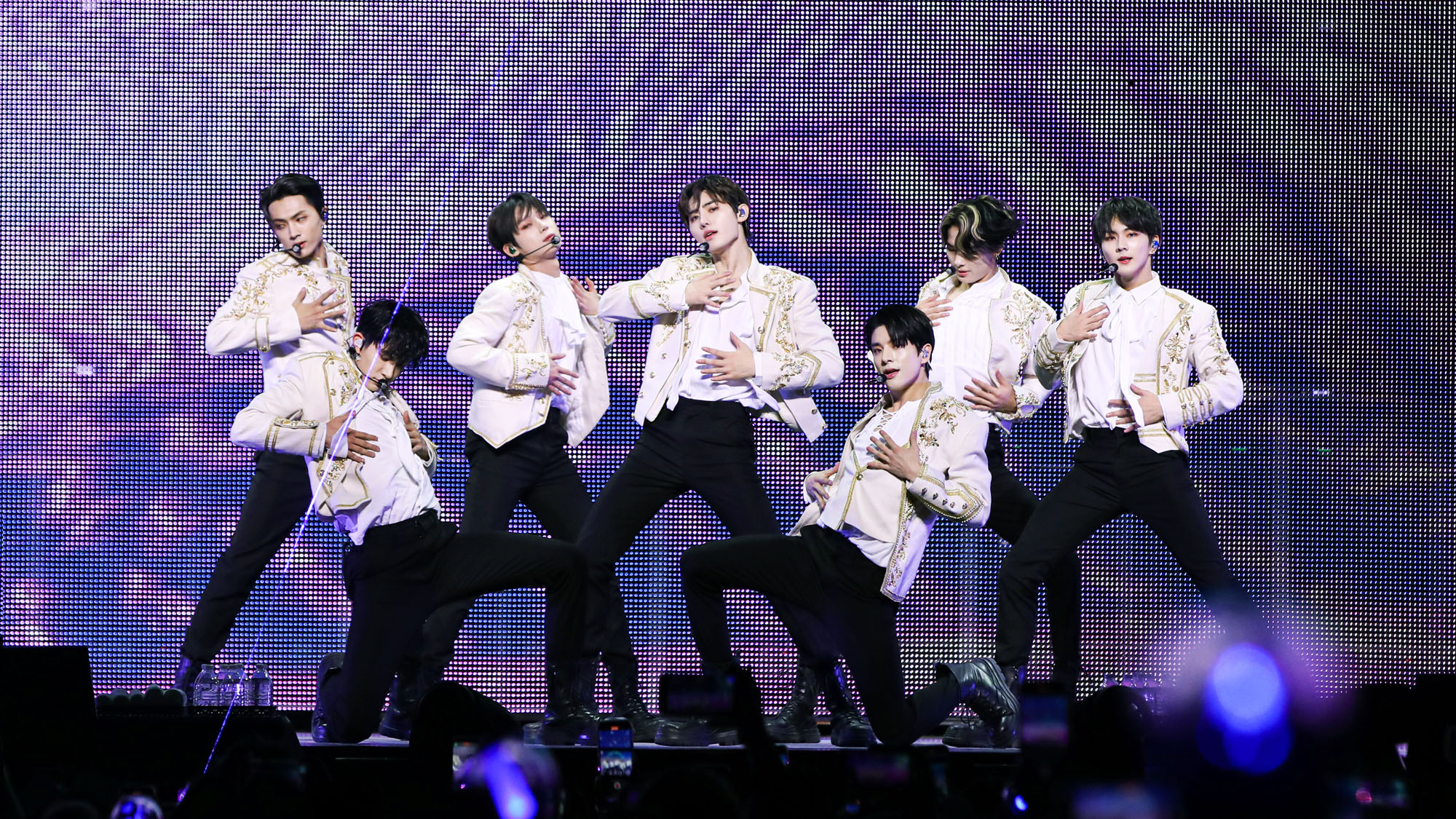 As ENHYPEN took the stage, the red walls of the iconic Radio City Music Hall vibrated with incredible, unparalleled energy. Fans have been waiting with explosive anticipation to see the seven-member group on the sold-out final leg of the North American leg of their “MANIFESTO” world tour. The tour was the band’s first – having kicked off in November 2020 and spanning months of fan meetings and festivals that took place in Los Angeles, Frankfurt and Seoul. It is absolutely certain that in every moment of their tour, they have given everything to prove for sure that they are one of the dominant groups in K-Pop.

ENHYPEN consists of Jungwon, Heeseung, Jay, Jake, Sunghoon, Sunoo, and NI-KI. They are the first boyband to come out of BELIFT LAB, a joint venture between HYBE (which is also home to BTS, TOMORROW X TOGETHER, Seventeen and Le Sserafim) and CJ ENM. The group formed on the survival show I-LAND where individual trainees competed for a spot to debut in the new group. Their endearing name derives from the en dash and hyphen which brings together different words and meanings and the members swear to “connect, discover and grow together”. Since their debut, they have indeed reached new heights by being the youngest K-Pop group to enter the Top 10 of the Billboard 200 Charts.

The first song they performed “Given-Taken” exudes a graceful and delicate entry, but the mood of the song grew more vigorous and powerful towards the conclusion. After performing the cool and smooth “Flicker,” the members introduced themselves one by one without breaking a sweat. Heeseung’s birthday fell on the same day as their last show, and the boys excited all the fans in the building and filled the room by singing “Happy Birthday” to the oldest member. Immediately after, they launched into the fun and lighthearted “Not For Sale”, “Let Me In (20 CUBE)”, and a song from their latest album, Manifest Day 1 “TFW (That feeling when).” The playfulness continued during “Upper Side Dreamin’” when Sunghoon and Heeseung slyly clapped hands before the rocking chorus. NI-KI, Sunghoon, Sunoo, and Jake fiercely opened “Mixed Up” to lead a compelling group performance.

The mood changed when they came out for the hypnotic “Drunk-Dazed” and each member moved fluidly with each heady beat. The boys rose effortlessly to royalty in ‘One in a Billion,’ seated in a banquet-like table procession where they defiantly jumped off the table during the song’s climax and launched into a break spellbinding dance that leads to Border: Carnival hit the song “FEVER”. Cooling down from the heat of the languid song, the boys split into units to change into their new ones, while the remaining units on stage teased the audience, who applauded each member one by one, removing their jackets to reveal their glamorous swimsuits. He did the job very well as he threw them into “Attention, please!” which highlighted each singer’s potential with eye-catching lyric graphics and had the music hall leaping with beaming excitement.

“An artist without his fans is not an artist,” Australian resident member Jake recalled of a quote from a wise man between songs. The crowd constantly returned the energy that ENHYPEN gave on stage. Engenes (the band’s official fan name) proudly waved their colorful Engene bong light sticks and held up banners expressing their love and adoration for the band. The group crossed the aisles to reach out to Engenes for “Polaroid Love”, the viral song where everyone sang the lyrics directly to the members. Settling into the feeling of love, they serenaded the crowd with “Just a Little Bit” with a romantic spring backdrop glowing behind them. The seasons changed rapidly as the upbeat “Tamed-Dashed” brought the New York summer feeling back to mid-autumn with the hot choreography.

The boys continued to do their unbreakable performances in their all-white outfits in “Blessed-Cursed” with the powerful and agonizing lyrics “Don’t tell me what to do”. “Go Big or Go Home” samples Robin S.’s iconic “Show Me Love” and provided the ultimate fun dance floor for the audience as they moved on to the lively and focused “Future Perfect (Pass the MIC).”

After the first rebellious encore song “ParadoXXX Invasion,” each member expressed their gratitude for their fans and how proud they were of how far they had come since their trainee days. Group leader Jungwon promised that the group would come back and perform better than ever. Jay expressed his appreciation to Engenes saying, “New York is a beautiful city but y’all are so much prettier” with the crowd saying “Aw” in chorus for his flirtatious attempt. During this time, the remaining members also tried, but ultimately failed, to find a hand symbol trying to represent New York to signal to other cities that showed them theirs. Sunoo choked up and cried during his ending speech as the group hugged him, comforted him, and affirmed their sweet feelings. Their tender moments plunged into the pinnacle of “SHOUT OUT” which echoes ENHYPEN’s ethos, “We go and shout, shout, shout when we’re together / Stay, stay, stay, you make it better.” And after all those great times, all ENHYPEN wanted was to stay longer! After what was supposed to be the last song, the band went into another cover of “Future Perfect (Pass the MIC)” and “Go Big or Go Home”. Suffice it to say that ENHYPEN did indeed go big and we didn’t want to go home at all.

Our mission at STYLECASTER is to bring style to people, and we only carry products that we think you’ll love as much as we do. Please note that if you purchase something by clicking a link in this story, we may receive a small commission from the sale.