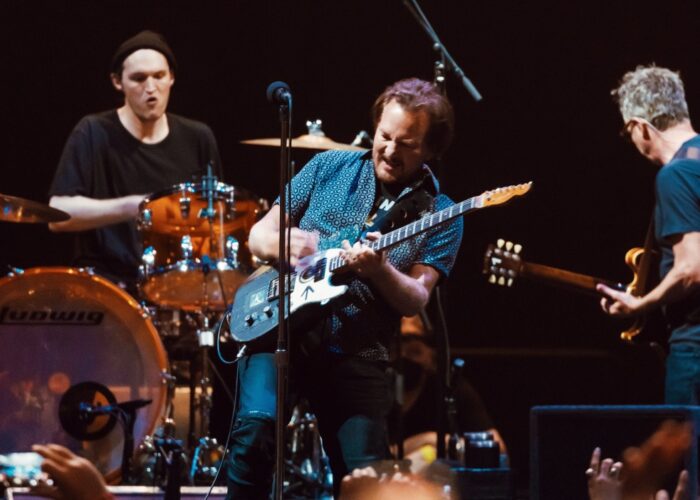 Despite Pearl Jam drummer out with COVID, the band rocked on — with help from Oakland fan

Pearl Jam had to call on a local fan to help finish its first Bay Area concert in nearly a decade.

With drummer Matt Cameron testing positive for the coronavirus before the Rock and Roll Hall of Fame band was set to take the stage at Oakland Arena on Thursday, May 12, the group sent a message out to its fan club members looking for someone who could help out with drumming duties after postponing the show for more than two years.

Canceling was not an option, frontman Eddie Vedder told the crowd after opening the show with a cover of Neil Young’s “Rockin’ in the Free World.”

“We couldn’t let that happen. We couldn’t do that to you guys,” he said. “Matt Cameron is a true artist and he’s a force of nature. However, even his superhero status could not prevent him from testing positive. This damn COVID thing yesterday, we’ve been scrambling for 24 hours.”

Fortunately, former Red Hot Chili Peppers member Josh Klinghoffer was able to sit in for most of the night, along with Oakland musician Richard Stuverud, who substituted on the drum kit for a handful of songs. But to close out the night, Pearl Jam called on Josh Arroyo, a fan from Oakland who was plucked out of the crowd to play the drums on the night’s final song, “Yellow Ledbetter.”

If fans were disappointed by Cameron’s absence, they didn’t show it. Flannel shirts saturated the audience, who often sang along to three hours of the Seattle band’s ’90s grunge-rock favorites like “Alive,” “Daughter” and “Better Man,” as well as deep cuts like “Save You.”

Vedder wasted no time settling in at Oakland Arena. The longtime frontman of Pearl Jam hadn’t performed at the venue — or anywhere else in the Bay Area — with his band in nearly a decade, and he wanted to make it count. Tossing tambourines into the crowd during the band’s second song, “Elderly Woman in a Small Town Behind the Counter,” the rocker and his bandmates beamed at the warm welcome.

The long-anticipated concert on Thursday, May 12—the first of a two-night stint in Oakland, where they last performed in 2013—was originally scheduled as part of a North American tour two years ago to celebrate the release of the band’s latest album, “Gigaton.” But as with most large gatherings, the raging pandemic kept Pearl Jam out of the East Bay.

So when Vedder and his bandmates stepped on stage at a prompt 8:49 pm, the band and its fans released a collective roar that filled the former home of the Golden State Warriors and allowed their emotions to flow without holding back. There were shoulder-shaking tears, vein-popping screams and non-stop applause.

“This is definitely the best show of the tour by far,” Vedder proclaimed. “Something special is happening here.”

Steven Mikalis, 44, said he has seen the band play 87 times. But Thursday night’s show was special — this time, he brought his 10-year-old son, Kyle, for his first Pearl Jam experience.

“To be able to share this with my son means everything,” Mikalis said. “Look at the smile on his face. This is now my favorite Pearl Jam show.”

The Oakland locals were in the pit for the concert and did not stop dancing, jumping and screaming. The same went for Erik and Natalie Masalin, a father-daughter duo from San Ramon. Erik Masalin, 46, was seeing the band for the seventh time, while 10-year-old Natalie was catching her first live concert. By the encore, Masalin was lifting Natalie onto his shoulders while she pumped her fists into the air.

Another generational twosome was mother and son Lana and Paul Ekstrom. Lana, who traveled up from Morgan Hill, said the band’s philosophical poetic lyricism and philosophical beliefs have kept them close over the years.

“I’ve felt that their songs are so relevant to my life that it doesn’t matter what age you are when you listen to them,” Lana Ekstrom, 76, said. “The true heart of them is so deep that their songs just make you cry.”

Paul Ekstrom, 53, bought the pair of tickets more than two years ago as a Mother’s Day gift. He has since moved to Tacoma, Wash., but was determined to take his mom to the show when it was rescheduled.

“This is a different type of band. You can’t really explain it, you just have to see them play live and you’ll always come back again and again,” said Paul Ekstrom, who was attending both the Thursday and Friday night shows in Oakland, bringing his tally up to 26 Pearl Jam gigs.

Mega-fan Randy Stein, who drove nearly four hours from Truckee, was tailgating with his wife and friends in the parking lot before the show, counting down until it was time to enter the arena. He was so determined not to miss any part of the live performance that he said he was pacing out his beer to ensure he would not have to use the restroom during the set.

“They play a different set every night, so I have no idea what I am going to see, meaning I can’t miss a minute,” Stein, 58, said.

Stein first saw Pearl Jam in 2013 during the band’s last Bay Area tour stop and has seen them five times since, including once in the band’s hometown of Seattle.

“I first became attracted to their music because of how good they are, but then I came to appreciate them because of how long they’ve stayed together and because of their genuine activism in communities,” Stein said.

Throughout the show, Vedder paused to discuss varying issues facing the country and the wider world, such as abortion rights, freedom of speech and homelessness. With a bottle of red wine in hand, a signature Vedder move, he toasted the state of California for “its progressive politics.”

“I want to thank this beautiful state for leading the way,” Vedder said. “Especially at a time like now where we need strong, progressive voices supporting those who are fighting for their rights.”

So, this replacement drummer was a dad at my kids’ elementary school, played in the parents’ band that would perform at school fundraisers (including the auction I co-chaired), and taught many of the kids at the school.
This is beyond awesome. And, #OaklandPride https://t.co/r96ckPphdN