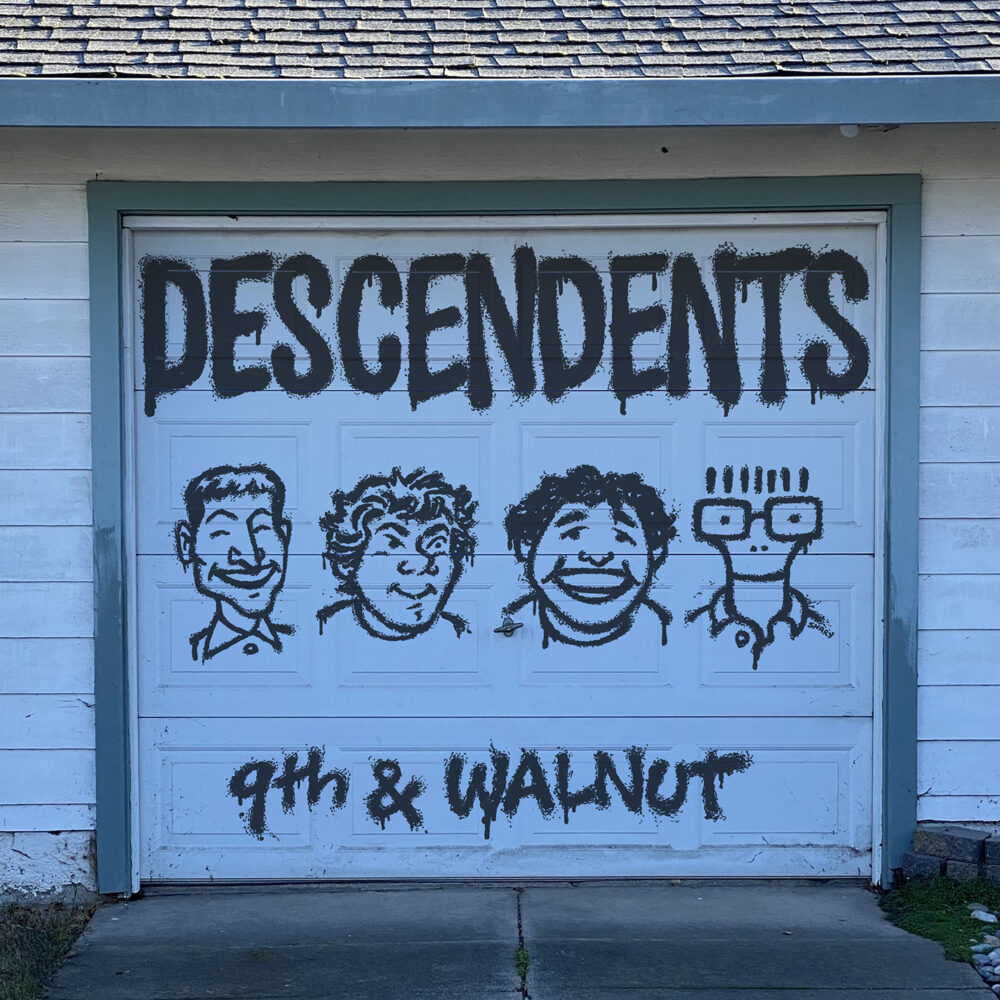 In 2002, the original Descendents lineup came together to summon the energies of the band’s first lineup. Bill Stevenson, Frank Navetta and Tony Lombardo revised the songs the trio wrote together over a three-year period from 1978 to 1980. Stored in the mental archives and intact for nearly twenty-five years, these compositions were ultimately recorded during the session in the Blasting Room studio. Yet their final version wouldn’t appear until 18 years later, in 2020. A numerologist might assume that the Descendants go for their happy combination of zeros and twos.

Nonetheless, a few sad events have taken place between these pivotal dates. Guitarist Frank Navetta died of diabetes in 2008. In the same year, drummer Bill Stevenson was diagnosed with a benign brain tumor and underwent successful surgery in 2010. Later, Milo Aukerman, the band’s key vocalist, was fired and quit his career as a microbiologist. . Then the pandemic started.

With this difficult period fading away, the band seems to be even more enthusiastic about the record. While in lockdown, Milo Aukerman was working on the group’s new material when suddenly he felt the need to do something else. “I asked Bill ‘hey send me the Frank and Tony stuff’ cause I just wanted the ball rolling.” By adding his voice, Milo gave the songs a sense of time when he joined the group.

Named after the crossroads in the Long Beach area, where the band rehearsed, the record attempts to recreate the damp and electrified atmosphere of a rehearsal space. An anonymous garage on the cover is decorated with a spray paint showing cartoon portraits of the members of the group. One of them can be easily recognized – an iconic portrayal of Milo Aukerman, originally designed by Chris Shary for the cover of the band’s debut album, Milo Goes to College.

“That was Bill’s concept,” says Milo, “After the recording he came over and said,“ I want this record to be called “9th and Walnut” as a document of our first practice space. And then I think it snowballed into an idea – because it was in a garage – so how about a photo of a garage and someone could spray paint on the in front of? These are some of the garages in this area where the original rehearsal space was located. Thus, the garage itself became a canvas for the artistic concept. 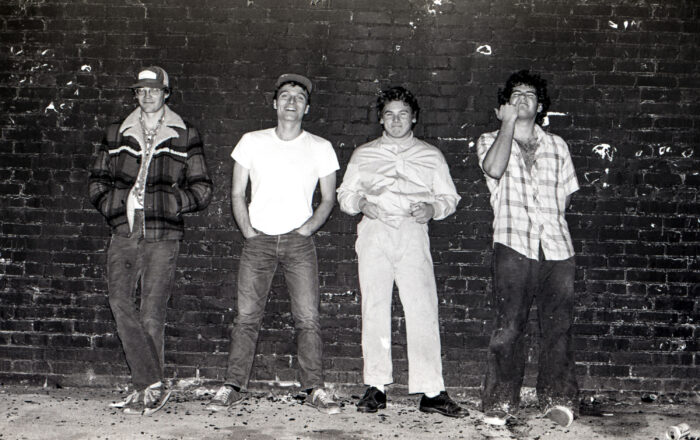 Descendants in 1980 – photo by Edward Colver

Like a virus, 18 brutally short songs immediately convey the relentless energy of a coiled instant coffee freak. The shortest number – Baby Doncha Know – lasts fifty-six seconds. Slipping on an edgy guitar riff, it delivers a wacky message, somewhat similar to The Users’ Sick of You, but with a faster, almost hardcore beat. In fact, by the end of the 1970s, caffeine had become an integral part of the group’s diet. “We started with Folgers and then I think we moved on to MJB. At that time, you couldn’t really have a really good cup of coffee. It was the pre-Starbucks era.

Nonetheless, the melodic texture of some songs seems to balance adrenaline with an endorphin effect from Californian power-pop and the ’60s British beat scene. A metaphorical sweetener for an intense mud of the garage sound, it reveals the band’s positioning in the musical continuum. “We wanted to play fast and loud but have a little melody but A. we didn’t invent it; B. I think we were just passing the torch to the next generation, ”says Milo Aukerman. Influenced by ’60s revival bands such as Los Angeles-based The Last, the Descendents explored their musical education and looked to the future.

Signed at Bomp by Greg Shaw! Records, The Last made a brilliant debut album LA Explosion, which became an influence on California’s growing pop-punk scene. Descendents guitarist Frank Navetta, credited with writing most of the band’s tracks from 1978 to 1979, was particularly passionate about The Last. Impressively, he and drummer Bill Stevenson were 16 and 15, respectively, making a 16-year gap with their bassist Tony Lombardo. Despite having a different take on nostalgic-infused music, the three members found this melodic force just as inspiring. Milo Aukerman, who joined the group in 1980, still witnessed the sparks of a time machine thread. “The Beatles were in our DNA for sure. I walked to my friend’s house, who had the entire Beatles collection. Then go ahead to the early 80s for me and listen to bands like The Last. I liked the band because they did this Beatles thing but also injected a lot of punk energy into it. If you listen to Last and then 9th and Walnut, you can certainly hear a lot of similarities. Mohicans (The Last of the Mohicans) just sounds like a song from The Last to me. There is even the word “last” in the chorus “.

Shifting to a more daring aesthetic with the debut EP Fat, the band left those songs behind and breathed new life into them by recording 9th and Walnut. With the vocals of Navetta and Lombardo, the original takes of Ride the Wild and It’s a Hectic World from the first single also evoke the garage buzz of Creation and the romantic rascality of the Buzzcocks. Revised almost twenty years later, the songs receive a new interpretation, in part thanks to Milo’s presence as a singer. His arrival in the group in 1980, in fact, injected the Descendents with the energy and presence they needed – a frustrated, charismatic leader with an urge to speak. At that point, Milo, who had already been seriously interested in biology and genetics, found a way to celebrate his nerdness through punk.

“I feel like being a nerd is kind of a misfit. And also part of being a nerd is taking action, I’m going to call them geek tendencies, which is spaz (some people don’t like that word). Sometimes it’s hard to describe how uncomfortable I felt being a nerd. Whatever the opposite of cool, that’s how I felt. I think it was. get into punk rock, punk rock is being a misfit, it’s having an outlet to remove some of your frustrations and your energies in a socially unacceptable way.

The compilation of songs with angry lyrics ends on a nostalgic and a little softer note with the cover of Glad All Over by Dave Clark Five. Once again, the group pays homage to the beat music that fueled their musical background. With a few additions, like a longer bass intro, the song is placed in a different context over time. “This song is placed there as if to document our first set-list as there would have been Dave Clark Five,” says Milo Aukerman.

Having recorded at the Blasting Room, founded by Bill Stevenson, the Descendants seem to have reached a compromise between their initial DIY approach and quality studio sound. Those looking for the 70s garage texture, similar to that of the original single Ride the Wild / It’s a Hectic World, might be slightly disappointed. Sound side, this is not a revival album. Still, 9th and Walnut definitely celebrates the band’s debut and documents the moment of transition on the California music scene. “People like to call it nostalgia but I feel like it’s more than nostalgia,” says Milo, “This music is injected with youth into its nature, so that’s not necessarily a thing. nostalgic, I love the way she makes me feel more than anyone else. “

9th & Walnut can be pre-ordered via Epitaph files (released on July 23).

All the words of Irina Shtreis. Other writings of Irina can be found in the archives of its author.

Bringing it back inside out: interview with Kat Von D