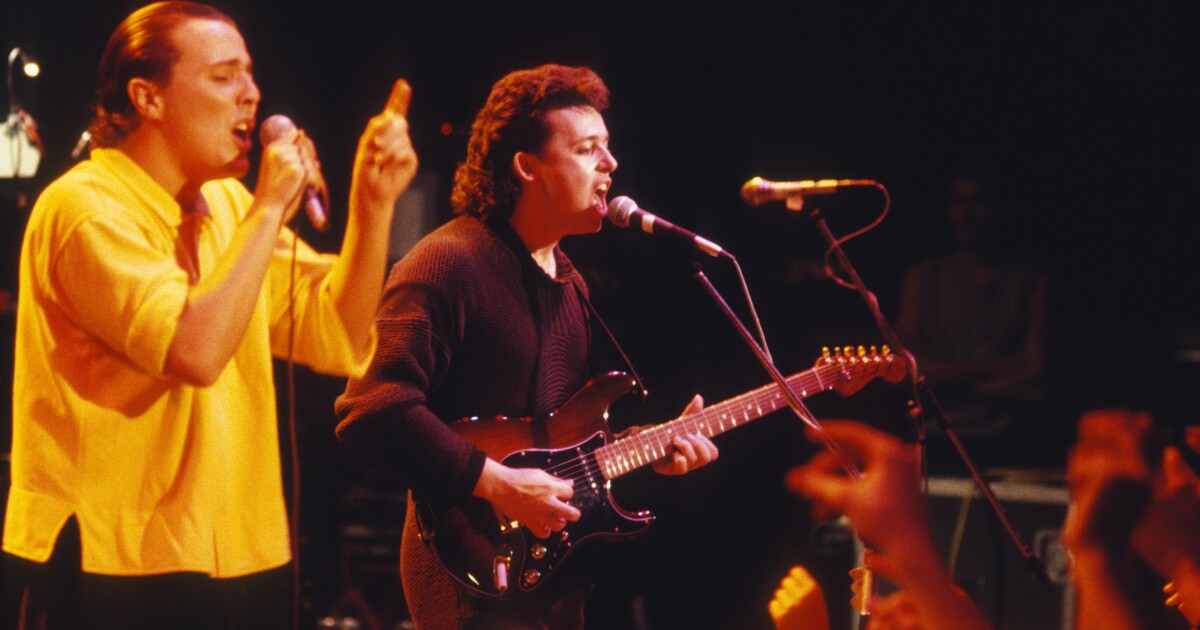 Roland Orzabal has no memory of Tears For Fears’ first sold-out concert in 1985 at San Diego State University’s outdoor theater. But the elated – and almost deafening – response the English duo received still haunts Tears co-founder Curt Smith to this day.

Evidence of their differing memories of that performance 37 years ago was recently demonstrated by their reactions to hearing a small portion of that review read aloud to them in separate telephone interviews. Their 2022 Tears For Fears Tour includes a June 5 concert in San Diego at the North Island Credit Union Amphitheater.

Here’s the start of that 1985 review, followed by Smith and Orzabal’s responses from earlier this month.

The Tears concert is a resounding success

How excited was the crowd? Well, consider the following. At 9.12pm – more than five minutes before Tears for Fears was due to appear – several hundred fans rushed to the stage. Two minutes later, with the house lights still shining, the entire audience rose in almost frantic anticipation.

Or consider the following exchange between Tears frontman Roland Orzabal and those in attendance before the introduction of “Pale Shelter,” the concert’s third selection.

“Hello.” (Deafening shouts.) “Hello, everyone.” (Yells even louder.) “Bitchin’.” (Screams even louder.) “This is our very first time in San Diego. (Extended pandemonium.) “And uh…” (More shouting.) “Uh, what a lovely evening it is.” (Massive grunt.) “Shakespeare…” (an obvious absence of shouting) “…Shakespeare said a lot of things, and I’m sure he once said something about a night like this. this.” (Yes, no more shouting.)

Orzabal laughed several times as he listened to the above five paragraphs read aloud to him by the same music critic who wrote the review in 1985. Smith also laughed, but his comments could not have been more different than those of his band mate.

Orzabal: “I don’t remember at all. I guess we were having fun, more than we admitted at the time. Because we’re both happy to complain about anything, and (touring at the time) was hard work. But I see videos of us in 1985 playing live, and I see two very happy young men.

Black-smith: “It’s kind of a blur. But when I hear or read this review, a lot of what’s in it is why I didn’t want to do it (tour) anymore. This kind of (audience) hysteria… alienates me.

Orzabal: “Part of you is stunned and overwhelmed by the warmth and enthusiasm of the audience. The other part of you is like, ‘OK, what’s the next deal?’ So it’s always tempered by the difficulty of your job, which seems to come naturally.

Black-smith: “To have a reaction of just euphoria, when you don’t know that individual on stage – or individuals, in our case – is very particular. I still don’t understand it.

Orzabal: “I was not fazed by the success. I had a mission. I was motivated by the same things that motivate me now.

Black-smith: “With audience responses like that, I guess you end up being some kind of pop idol. don’t listen to what you say or the lyrical content. They really scream at what they perceive from the group.

Orzabal: “The public response you described in San Diego was wonderful. I don’t think it will be like that now!

Black-smith: “All I remember from that tour (1985) are hotel rooms, non-stop interviews and concerts every night…it was soul destroying.”

Tears For Fears, with garbage