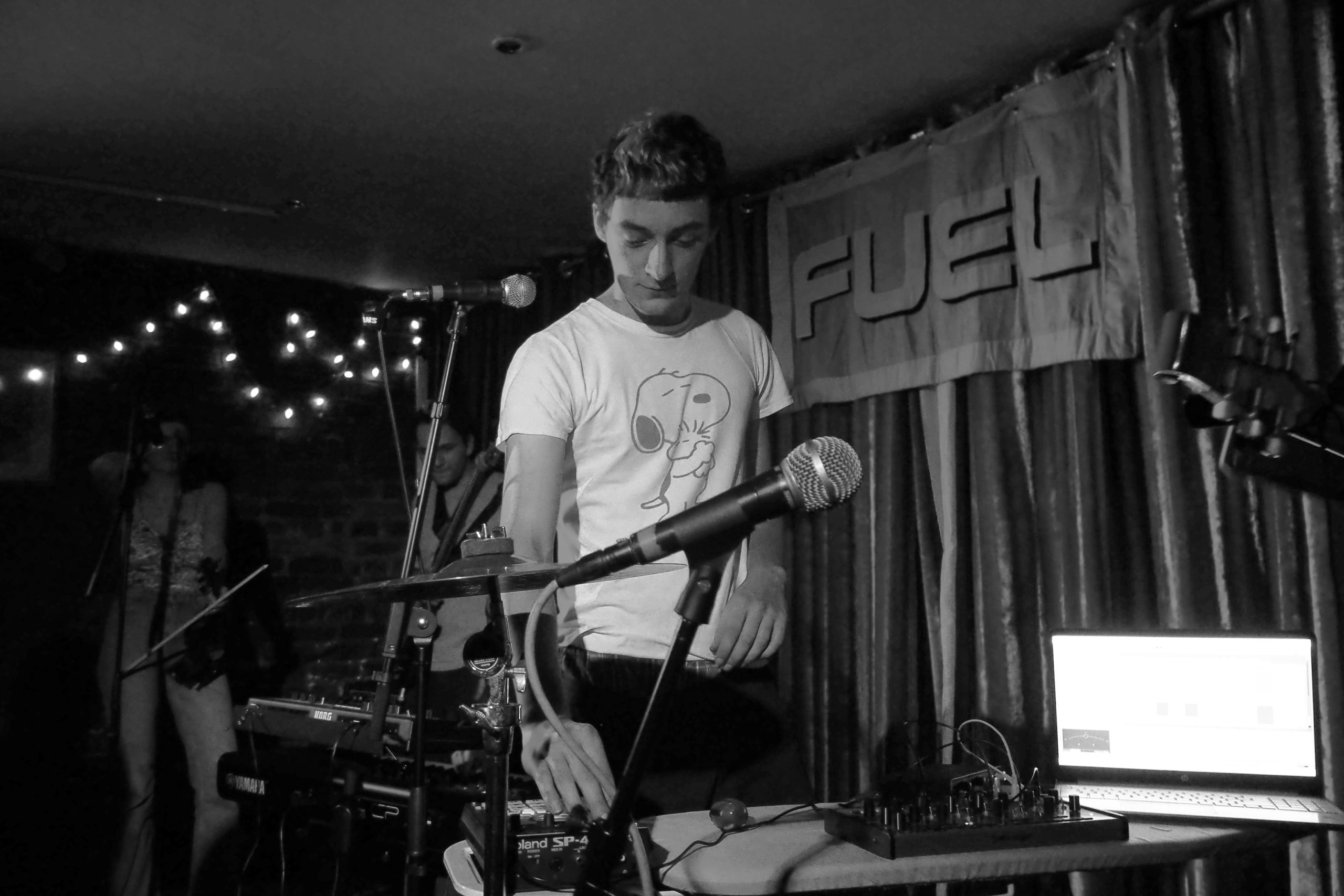 Last February, before their first festival and gig (certainly a feat few bands can accomplish), I had a chat with catbandchat, an experimental student band (consisting of bass, synth, guitar, vocals, violin, trumpet and drum machine) that leaves the audience unable to explain what they have just seen. I had spoken to a few viewers before and after their concerts, with one person describing them as “orchestral EDM” and others simply unable to find the right words. I would ‘categorize’ them as an experience.

Their response to a question about the genre of their music is self-conscious confusion, Mhairi considering it a “very valid question”, with Tomas proclaiming that they “just give a fuck”. Apparently, the question of what kind of music the septet does causes quite a controversy in the group, but in reality, it can be seen as “a bit of pop…hop…alternative…electric…experimental…art-pop…post- punk”. Rory is a fan of Mikey’s usual answer to the question – that as long as it’s not independent, they’re okay with being called anything.

The theatrical element of their music seems to be what audiences know them for. In music, there is usually this dichotomy between “live” and “recorded”. Jazz historian Ted Gioia says that “whereas early recordings hoped to replicate the sound of a live performance, today musicians are more inclined to adjust public performances in order to recreate the sound of a studio recording” . This, for him, stands in contrast to jazz which relies on improvisation to create “imperfect art”, emphasizing the importance of live performance in the genre. I think Catbandcat’s incorporation of recorded elements into their live music, which is still clearly very improvisational, combines this historical importance of “live” with modern technology, to create truly “theatrical” music (like Rory the call).

In our discussion about it, they explained that while it became a very important tenet in their style, it actually started out as a happy accident. “Early on, we just couldn’t find a drummer, so we just put some beats on the sampler and took it from there,” Tomas explains. Rory recalls that “right from the start, having a rehearsal and talking either we’re a band that want to have a drummer but don’t and we’ll get one in the future, or we don’t want to have one and we’ll see. how this limitation takes us”. Their songs basically start on the computer and then they play along, adding and removing elements as they go.

Limitation and experimentation as a result of challenges also seem to be part of how the band continues to produce crazy sounds. Few bands have 2 melodicas but Deniz and Rory started duets together in their house during lockdown which led Mikey to ask Rory to write a song with ‘a dare’ – he said said, write one with a melodica. The band enjoys the theatrical element of their wacky instrumentation so much that they are considering including a side sibilant to their new song.

We talked about their influences for much of the conversation. I attributed a lot of that to jazz, but I found that wasn’t necessarily the case. Surprisingly, while I thought it was largely spontaneous improvisation, I learned that for a lot of songs written by Mikey, the parts are all written out. Anyway, in Mhairi’s words about improvising when it happens: “It’s not traditional improvisation – because we’re not following a framework, or working out chords, well we are but it’s not like a lead sheet it’s just like we throw her in there Marla changes a lot what she plays especially the one where you two are just and where you play the guitar and sing, sometimes you come out with ridiculous lines and I’m like “’hat??’” Marla, quite humbly, replies that “sometimes there’s nothing”.

Apparently, a lot of their influence also came from the UoM composition module, which they said had “forced” them to try “lots of random stuff.” Also, although they all have different musical tastes, Bjӧrk and Jockstrap stand out as big influences, although Mhairi claims that their tastes all overlap now because Mikey used to put his music all the way into their old house. Basically, subliminal messages from Mikey to make music he likes sound.

They each attribute jazz influences to other people, and the way they all think about music is clearly very different, but it obviously blends very well. Tomas notes that Mikey and Deniz have strong jazz backgrounds, “but actually I think Rory too, the way he talks about his pieces is a bit more abstract. So he says there’s world 1 and world 2, and they’re related to each other but they’re completely different and you have a lot of room. And there we go – let’s go! And you are like? Deniz claims it’s because Rory is a drama student.

In the end, I would say that I had two main takeaways from the group. The first beautiful thing I learned from our conversation was how the things that I (and probably other audience members) perceived as very deep and profound stylistic choices – like their name (which became because it was the only chat-related instagram handle available), and the incorporation of recorded material into the performance (which happened in the absence of a drummer) – started out as mere happy accidents. The second thing was how well the band got along. I asked about their future plans, and while the group formed (again, quite by chance) from a group chat, they think they’ll try to stay together because they are such good friends.

The next possible dates to discover Catbandcat live and in the flesh are for Cut Loose Fest (18.06) and Feline Fest 2 (20.06) – follow their instagram (@catbandcat) to stay up to date!

THE MARS VOLTA returns with the single and the short film “Blacklight Shine”, first tour in a decade announced!