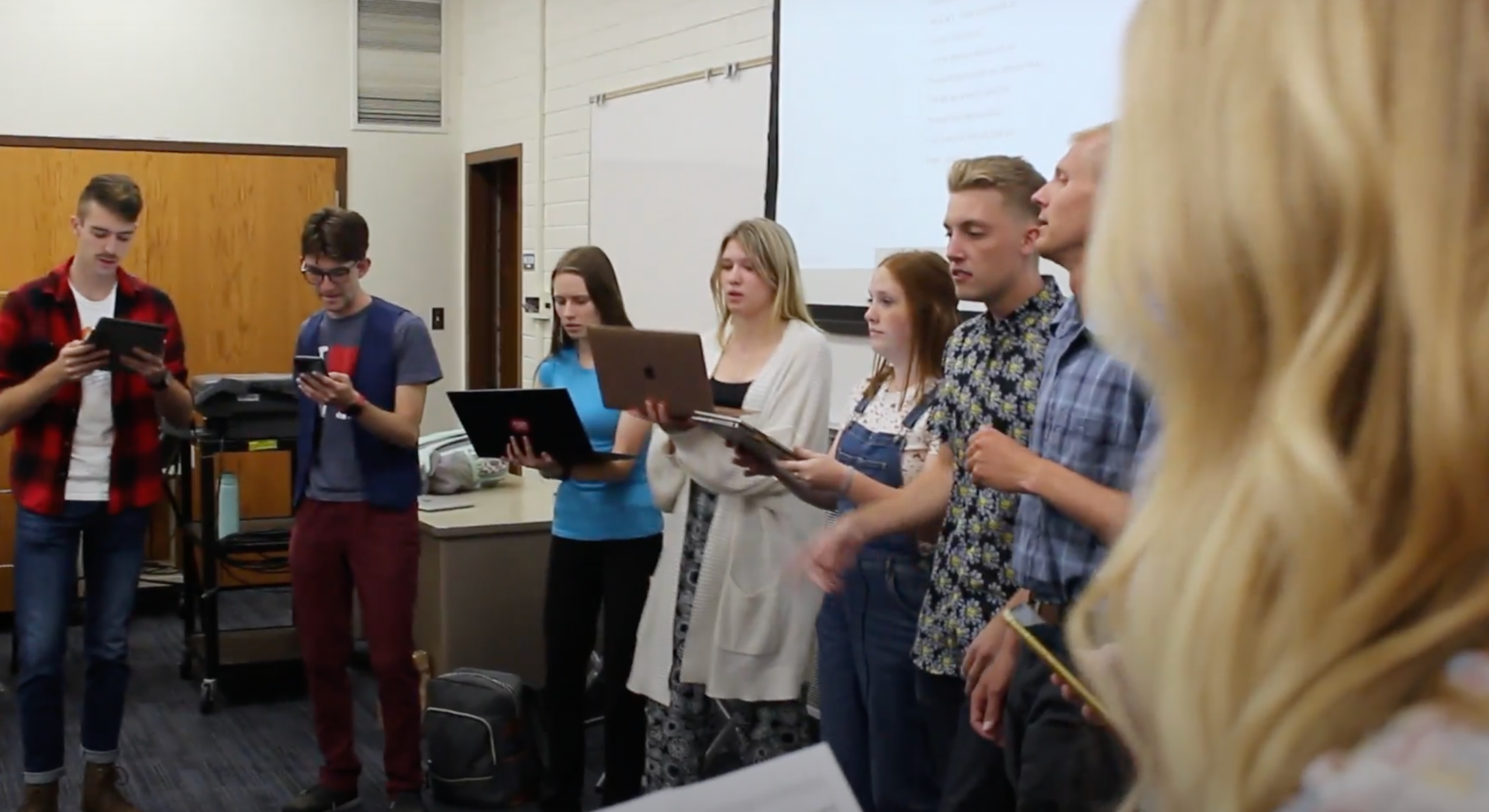 Maryann Dudley, Dallin Bohn and Mitch Anderson are all members of BYU a cappella Dynamite, and they say the group has helped them find friends, express themselves and take a break from school.

Maryann Dudley, a junior who plans to apply to business school, said she struggled to make friends when she came to BYU.

“I started school in the fall of 2020, so just during COVID,” Dudley said. “My ward didn’t socialize much or do any activities.”

Dudley said she only met her roommates and the people they brought, and then the COVID-19 restrictions got even tighter. She said it was very difficult and she struggled a lot.

Dudley said her older sister did an a cappella group in college and invited her to look into the matter.

“I went to her house and filmed a couple of times trying to get an audition video because they were online,” Dudley said. “I got feedback from a few bands.” She was part of the BYU group Dynamite a cappella and was thrilled to join.

BYU sophomore Dallin Bohn said the group’s founders reached out to him on Instagram about joining the group. “They reached out to me and said they liked the beatboxing that I was doing,” Bohn said. “I sent a video of me beatboxing, and the band wanted me.”

For Bohn, the invitation to join came at an important time in his life.

“I was actually serving the rest of my mission as a service missionary in California, but I was still fully involved with the group,” Bohn said. “I was muting myself on the phone to practice with the band.”

Bohn said he trained twice a week with the group while serving, then continued after his mission to keep them busy. “You go from a busy schedule doing everything, and you have this giant purpose in life,” Bohn said. “I came home from my assignment to work, but it was nice to have something to look forward to at BYU.”

BYU junior Mitch Anderson said he really missed singing when an opportunity to join the band presented itself.

“I knew Maryann because we had done a BYU Vocal Point summer camp,” Anderson said. “There was a guy from Dynamite who had dropped out of the band just weeks into the semester, and she contacted me to see if I wanted to be in that a cappella band.”

Anderson said he decided to join, and he’s had a blast ever since. He said everyone is so talented and he feels like part of a family.

Dudley said it also helped her learn to build positive relationships with people while at school.

“For me, being around people like me, learning how to interact and connect with different people has been a blessing,” Dudley said. “I was able to have social interactions twice a week during COVID, which was wonderful.”

Dudley said that as club president, she learned how to work effectively with other team members.

“These people are all so talented,” Dudley said. “Learning to try to lead people has been good for me.”

Bohn said he was grateful for the opportunity because it gave him a chance to express himself through music.

“I love the creative part about it,” Bohn said. “I needed something that was full of creativity where I could feel more musically free.”

Anderson said being a part of Dynamite helped him overcome impostor syndrome in his major, especially when applying for jobs.

Dudley said his goal for the band, in addition to providing a fun outing from school, is for all band members to learn how to arrange music.

“Everyone is probably going to be making music for the rest of their life, whether it’s for their parish or maybe a profession,” Dudley said. “The goal is for everyone to grow in their musical abilities, even if they don’t become a professional a cappella singer.”

Bohn said he used this opportunity to gain experience in musical arrangement.

“It helped me have another path in music that I can explore,” Bohn said. “It’s cool to see my own collection of notes on a computer screen suddenly come to life.”

Anderson said getting involved in these kinds of extracurricular activities is simple, but very helpful.

“BYU is a place with a lot of really talented people, and so you might not get into the program or the acapella group that you want to be in,” Anderson said. “Just keep doing what you love to do, and eventually you’ll find people who want to do it with you.”

“It’s nice, especially in your early adult years, to feel like you’re an individual and expressing the core parts of yourself,” Bohn said. “There are so many opportunities to do that.”

He said taking a break can also help you focus better on your studies.

The BYU A Cappella Club will host a Care Week Concert on Nov. 18 with proceeds going to various charities. More information about Dynamite can be found on their Facebook page.