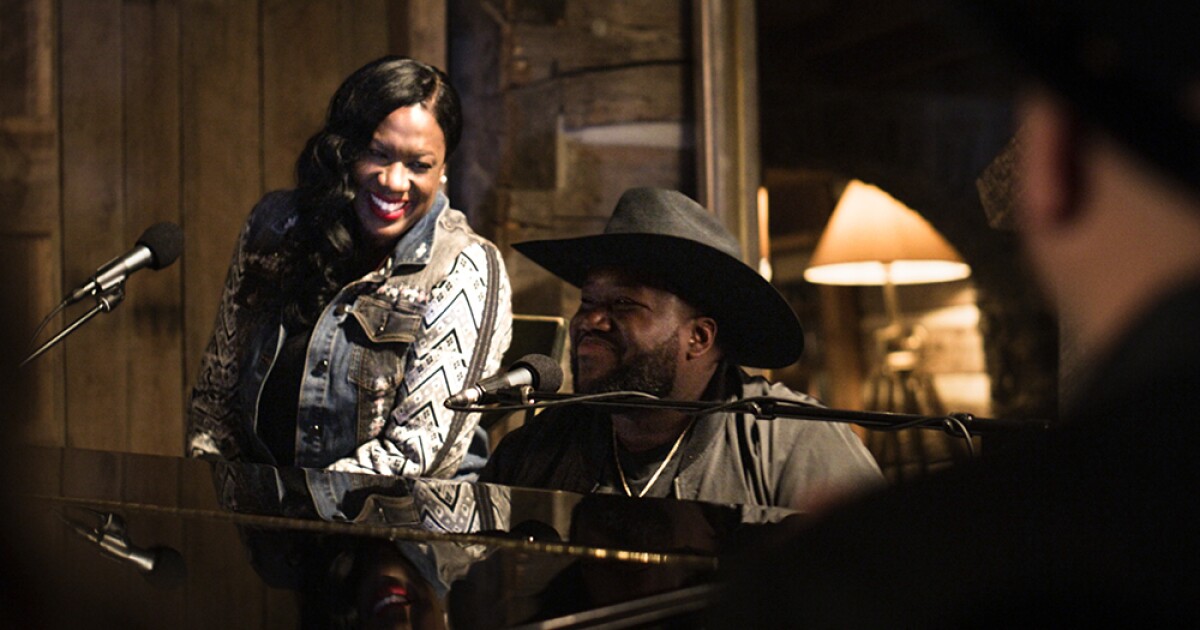 Across the country, in every community, unsung heroes are quietly working to improve the lives of others. Their inspirational efforts often receive little fanfare – until now. AMERICAN ANTHEMS, a new six-episode series, celebrates these everyday heroes with surprise songs from today’s biggest country music stars, including Jennifer Nettles, Lee Brice, The War and Treaty, Lindsay Ell, Cam and Ruston Kelly.

Each episode of AMERICAN ANTHEMS will follow a different country star as they meet a local hero and discover the transformative experience that inspired their commitment to bringing positive change to their community. Then, working with a famous songwriter — including Sugarland’s Kristian Bush, his collaborators Billy Montana and Adam Wood, and Bill Sherman — the country star will secretly turn the hero’s story of kindness, hard work and perseverance into a epic original song. At the end of the episode, the hero will be surprised by a unique performance of the artist’s powerful anthem surrounded by family and friends.

Lee Brice and his songwriting partners create a song for Ashley

Among the six heroes honored on AMERICAN ANTHEMS is a father who started a non-profit organization to help families of cancer patients while undergoing cancer treatment himself and a former police officer who founded an organization that supports survivors of abuse sex after struggling to recover from his own stroke.

Viewers will also meet a young, service-oriented woman whose nonprofit organization provides free laundry days in low-income areas; an enterprising member of a public school board who has made it her mission to collect books featuring black characters for children who otherwise would not have access to various stories; a military veteran working to rescue retired police and military K-9s; and a creative performing arts director who teaches acting to mentally challenged adults.

“There are heroes all around us, and we’re so grateful to be a part of honoring some of our country’s most overlooked and forgotten, especially those on all fours,” said Michael Trotter Jr. of American duo The War and Treaty. A veteran himself, Trotter and his wife Tanya write and perform an original song for Jason Johnson, a decorated military veteran and the founder of Project K9 Hero.

Episode 1: “Life is Sweet” raw Friday, June 24 at 10:30 p.m. on KPBS TV – When Seth Grumet was diagnosed with cancer, he was surrounded by an impenetrable network of family and friends who helped him every step of the way. It was during this experience that Seth learned how rare it is to have a supportive community, so he created an organization called STOMP The Monster™ to provide the kind of support system he relied on if strongly to those who are not fortunate enough to have the same. After spending an emotional day with Seth, Grammy winner Jennifer Nettles brings out the incredible kindness and hope in her story to write a song in Seth’s honor with award-winning songwriter Bill Sherman. Performing the anthem hovering over Seth’s life in front of family and friends, Jennifer leaves a surprised audience without a dry eye in the house.

Episode 2: “Pocket Change” premieres Friday, July 1 at 10:30 p.m. on KPBS TV – When Ashley Ruiz returned to the United States after two and a half years in Puerto Rico, she started helping a friend with her simple but incredibly impactful idea: take over a laundromat in a low-income area for a day and pay for it. as much laundry as each customer can wash. Realizing that their small act made such a big difference, Ashley dedicated herself to the organization, The Laundry Project. She and her volunteers are called “merchants of hope” because they offer dignity and hope to those who struggle with the demands of daily life. Grammy nominee Lee Brice spends a day with Ashley at the laundromat and sees how a little “pocket change” can change a life. This becomes the inspiration for Lee to work with two famous songwriting collaborators, Billy Montana and Adam Wood, to create a song that pays homage to Ashley and her group of “Merchants of Hope”.

Episode 3: “Soldier On All Fours” premieres Friday, July 8 at 10:30 p.m. on KPBS TV – Jason Johnson is a decorated military veteran who spent years in the Middle East as a K-9 handler. At the end of his Iraq tour, Jason learned that once military K-9s retire, all government care and funding stops. That’s when Jason started Project K-9 Hero, a non-profit organization that provides the best quality of life for retired military and police working dogs. War and Treaty (Michael and Tanya Trotter) meet with Jason to learn his support story and the dogs’ stories of heroism. Overcoming his longtime fear of dogs, Michael, who is also a veteran, recognizes the healing power of these incredible animals. With this life-changing experience in mind, Michael and Tanya write a song that honors Jason’s advocacy and raises awareness of the challenges K-9s face after service. What Happens is a powerful and moving ballad that no one will ever forget.

Episode 4: “Let The Words Come Out” airs Friday, July 15 at 10:30 p.m. on KPBS TV – Greta McClain was a former detective in the police sexual assault division who suffered a horrific sexual assault herself. While dealing with self-imposed shame, Greta began talking with other survivors on social media and decided to create Silent No More, an organization that provides a safe space for survivors of abuse. sexual. Country star Lindsay Ell, also a survivor of sexual assault, instantly bonds with Greta as they engage in a day of creative therapy. After learning about Greta’s service to her community, Lindsay and her close friend, legendary singer/songwriter Kristian Bush of Sugarland, create an electric country rock anthem that Greta will use as a fight song on her mission of goodness.

Episode 4 Preview | let the words out

Episode 5: “Make Tomorrow Come Today” premieres Friday, July 22 at 10:30 p.m. on KPBS TV – As a child, Meredith McKinney took a brown pencil and colored the faces of the white-skinned protagonists in her books to make them look like her. Today, not only is diversity still lacking in children’s literature nationwide, but the books have become increasingly expensive. So, Meredith started the Black Book Project to collect books featuring various characters for low-income youth, then distribute them to schools, nonprofits, businesses, government institutions, religious organizations and other institutions. other community groups. Grammy-nominated Cam is no stranger to championing diversity, and together she and Meredith explore the fact that while a lot has changed since their youth, so much remains the same. It was this idea that prompted Cam to team up with songwriter Dr. Williams to bring Meredith and many of the children she has helped a surprise rendition of a moving folk anthem urging us all to act now. .

Episode 6: “What You’re Here For” premieres Friday, July 29 at 10:30 p.m. on KPBS TV – Melissa Smith moved to town with a performing arts degree and no plans. As fate would have it, she took a job at a local thrift store that employed mentally disabled adults and knew it was a life-changing experience. It was then that she established Backlight Productions, a performing arts organization that combines her background in theater with her interest in serving the intellectual and developmental disabilities (IDD) community. Singer-songwriter Ruston Kelly also knows what it means to make a dramatic life change, having originally planned and trained to become an Olympic ice skating champion. After spending an entire day with Melissa, including attending a dress rehearsal for an upcoming piece, Ruston reaches out to her close friend, songwriter Kate York, to create a deeply personal piano ballad celebrating the work. of Melissa and the good we can do once we realize our purpose.

Watch at your own pace:

THE MARS VOLTA returns with the single and the short film “Blacklight Shine”, first tour in a decade announced!